After the Cold War ended, the world hoped for an era of peace. But things turned out differently. Now, 30 years after the historic fall of the Berlin Wall that shifted power balances, wars are more complex than ever. 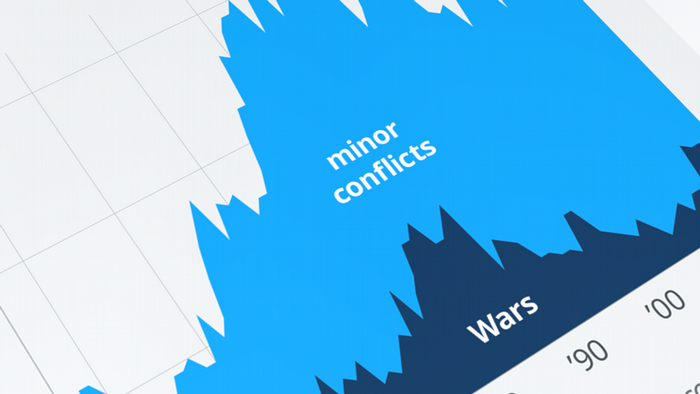 Read this article in German, Hindi or bahasa Indonesia.

The 20th century was dominated by wars. An estimated 80 million people died in two world wars. Then there was the Cold War: an arms race between the USA and Russia. In Europe and large parts of the world, two hostile sides faced each other. In Asia, the Middle East, Africa and South America, the global powers financed bloody proxy wars.

Peaceful revolutions finally brought down the Iron Curtain in 1989. The Cold War was declared over. "We hoped that after the end of the cold war, there would be an era of peace," says Sarah Brockmeier, UN peacekeeping expert at the Global Public Policy Institute, a Berlin-based think tank.

Are there fewer wars today than before?

However, this hope soon proved to be unfounded. There are still many conflicts around the world. Since the mid-2000s, their number has increased again. According to Brockmeier: "We’ve seen more conflict, more violence, and — especially since the start of the Syrian war — more conflict deaths."

This is mainly due to the intrastate conflicts of the 1990s, which nobody had seen coming after the fall of the Berlin Wall, says Brockmeier. Among them are the Yugoslav wars and the conflicts in Sierra Leone and the Democratic Republic of the Congo. The war in Mali from 2012 and the continuing war in Syria, which began in 2011, seem to continue the trend.

In the last ten years alone, researchers from the Department of Peace and Conflict Research at Uppsala University have counted 23 wars and 162 minor conflicts with fewer than 100 deaths per year.

According to Brockmeier, we have become better at recognizing the warning signs of conflicts. Still, we are often unable to prevent them. "We have not learned the lessons of mobilizing the political will early to already intervene before armed violence breaks out."

With increasing globalization, wars have become more complex since the fall of the Berlin Wall. In addition to the model of bilateral conflict with two opposing sides, there are often other parties involved as well who may, for example send troops or supply weapons, expertise or training. Until the beginning of the 2000s, only two or three external parties, on average, participated in any given conflict. In the following years, that average rose to between four and five.

The main reason for this is the complex conflicts in the Middle East: In 2009, 46 external parties were involved in the fight against the Taliban in Afghanistan. These include the countries in international alliances such as NATO, which, in Afghanistan's case, headed the International Security Assistance Force. The war in Syria today is similarly complex: Bloomberg, for example, counted ten different main participants alone in the constantly changing network of interests at the beginning of October 2019.

In 2017, countries around the world invested a combined €1.8 trillion ($1.98 trillion) into their militaries. That adds up to around two percent of the world's gross domestic product, marking a record low. Relative global military spending has in fact declined steadily over the past decades