Germany′s Steinmeier warns of ′invisible′ walls that threaten social cohesion | Germany | News and in-depth reporting from Berlin and beyond | DW | 09.11.2019 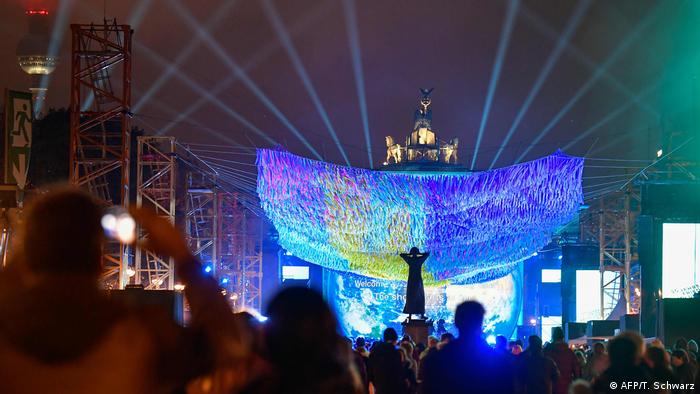 After a dark, dank day in Germany's capital, some 10,000 people flocked to Berlin's Brandenburg Gate on Saturday evening to mark the 30th anniversary of the fall of the Berlin Wall.

Beneath a fluttering art installation of notes on which people from around the world wrote their hopes and memories, people huddled together under an ethereal blue light, many of them remembering aloud where they were 30 years ago. A reminder that the impact of November 9, 1989, was felt far beyond German border.

Born in 1990, I wasn't around to see the day the Wall came down. I was, however, a witness to German reunification less than a year later — albeit at 1-month-old in a romper suit. Despite my absence from one of the most momentous nights in modern history, footage from the night of November 9, 1989, has been with me from an early age.

Aged six, in northern England, I vividly remember watching the grainy footage on a CD-ROM encyclopedia for the first time: the jubilation as people ran through the border, the mass of colorful tracksuits dancing on the wall, glazed eyes peering out from behind 1980s perms.

"But what do you mean, there were two Germanys?" I asked my dad. I don't remember how he attempted to explain almost a century of history to his overly curious 6-year-old, but since then, the images have stuck with me.

The rush of emotion when I watch the videos of East Germans flooding through the borders, the motorcade of Trabis, has only grown over the years in which I've lived in Germany — the country that I have come to call home.

'New walls have been built across Germany'

But the hope on East Germans' faces in those images from 1989 stands in stark contrast to the divided Germany of today, where many still debate the outcomes of reunification.

"This massive wall, this inhuman structure that claimed so many lives, is no longer standing. This wall is gone, once and for all," German President Frank-Walter Steinmeier told the crowd on Saturday night in front of the iconic Brandenburg Gate.

But, he warned, new walls have been built across Germany: "Walls of frustration, walls of anger and hatred; walls of speechlessness and alienation; walls that are invisible but still divide; walls that stand in the way of our cohesion."

Despite the progress made since German reunification, the political, economic and cultural divide between eastern and western Germany still runs deep. Unemployment is still higher in the east, eastern Germans are still underrepresented in leading positions and many still feel left behind as the "losers" of reunification. Even former East Germans who consider themselves "winners" of reunification often feel like their life behind the Iron Curtain has been forgotten in Germany's history books.

The new "walls" Steinmeier spoke of have much to do with the larger debate about identity in this country. In many senses there are still invisible "walls" that divide what it means to be German — not only between eastern and western Germany. The debates extend to many questioning the rights and identities of "biological" Germans versus "passport" Germans and those who have foreign roots. It is a particularly ugly side of Germany that I've seen grow at a rate I never thought imaginable when I first arrived as a student in 2011.

The complexities of being and becoming German

As an adult, Germany is all I have ever known. And my life here, coincidentally, has followed the path of German reunification. At 20 years old, I moved to the eastern city of Leipzig where in October 1989, some 100,000 East Germans took to the streets in peaceful protest in the "Monday Demonstrations," demanding freedom and democracy. A month later, the Wall fell.

During my studies there, friends and their parents would share their stories, feeding my appetite for knowledge about the country that ceased to exist. These conversations were pivotal to my own understanding and integration — and they are ones many western Germans could learn from. East Germany was not just visits by the Stasi, people clandestinely fleeing, poverty and desolation, families torn apart, dreams and careers stopped short by the regime. All that happened. But there were also recollections of happy days: weddings, birthdays, summer at the Baltic Sea, and a wealth of cultural traditions mostly unknown to the outside world.

Emails I sent at the time to my own relatives were filled with absolute awe for the city and its people: welcoming and open-minded. I never wanted to leave.

Four years later, work would take me to Bonn, the former capital of West Germany, now in Germany's westernmost state. On arriving there, I was astounded to realize most of my German friends there never been further east than nearby Frankfurt. "What's it like in the east?" they would ask. "Could you even understand their eastern accents?" Often, I felt like I was on a diplomatic visit, banging my drum on how wonderful eastern Germany was.

It was during those three years in the west, however, that the attitudes that accompanied Germany's darkest period were re-emerging in the east — in the form of the anti-migrant movement Pegida and the far-right populist Alternative for Germany (AfD) party. Video calls with family were increasingly spattered with conversations about the rise of the far right.

In early 2017, Berlin called. By this point, the German government moved here barely two decades before. It was two years since Chancellor Angela Merkel welcomed more than 1 million asylum seekers to the country, publicly stating that "we can do this." That September, the far-right AfD would enter the Bundestag for the first time, speeding up the construction of the "wall" that questions what it means to be German.

With Brexit currently planned for January 31, 2020, it is a question I am now asking myself. My pending application for German citizenship will soon be complete. Then I will be German — but just on paper, or so I've been reminded many times by otherwise polite Germans.

Apparently, German heritage still counts for more than years of immersing yourself in a country, appreciating the eccentricities of different regions, learning to speak the language fluently and leaving Germans baffled by the cultural quirks and colloquial slang that you pick up over the years. "Passport German," it seems, will never equate to "bio German."

Even before the rise of the far right, questionable rhetoric was commonplace in parts of German society. Children and grandchildren of migrants were, and still are, referred to as "second and third generation," or by the ethnicity of their forebears. Friends and acquaintances have found themselves all too often disadvantaged due to having a "foreign" surname or darker skin — some of them Germans themselves.

Germany still cannot seem to unite on its own identity, and the wall between Germans and non-Germans seems to grow only taller. Laws can be passed and proposals can be made, but as President Steinmeier told the crowds gathered in Berlin: "Only we ourselves can tear down [these walls]." Thirty years after reunification, Germany is faced with the decision of what kind of country it wants to be.