On November 7, 1957, the first "Trabi" rolled off the line. On April 30, 1991, the last one left the factory. The history in between saw this little car contraption turn into a mega star.

The "running cardboard," the "plastic bomber" or the "Saxon Porsche" — those are just some of the many nicknames that have been given to the Trabant.

And there's a grain of truth to every joke: The car, which was produced in Zwickau, Saxony, was made of a hard plastic known as Duroplast, made from recycled materials including pressed cotton fibers, synthetic resins and rags from the Soviet Union.

Metal was in short supply in the GDR, so the Trabi's carmaker used the raw materials that were available at that time — at least the car couldn't rust completely...

Although there were plans for further development — and East German engineers even came up with prototypes — GDR leaders halted the production of new, enhanced models. Inevitably, the East German car industry could not keep up with the West, so the Trabi was condemned to remain the dirty, noisy exhaust blower we've known to this day.

Since there was hardly any alternative to the Trabi in the GDR, it found buyers. People were even eager to wait years for it, since the demand far exceeded the supply. While around 16.4 million people lived in East Germany in 1989, only about three million Trabis were made from 1959 to 1991.

The model became world famous when the Berlin Wall came down, as thousands of Trabis lined up to freely cross the border from East to West Germany in 1989, making it the "car of the year." Still, despite its charged symbolism, the Trabant disappeared from Germany's roads quickly afterwards.

Western cars were sleeker, and the modern automobiles appealed to the reunited nation far more than the compact, less comfortable old-fashioned vehicle. 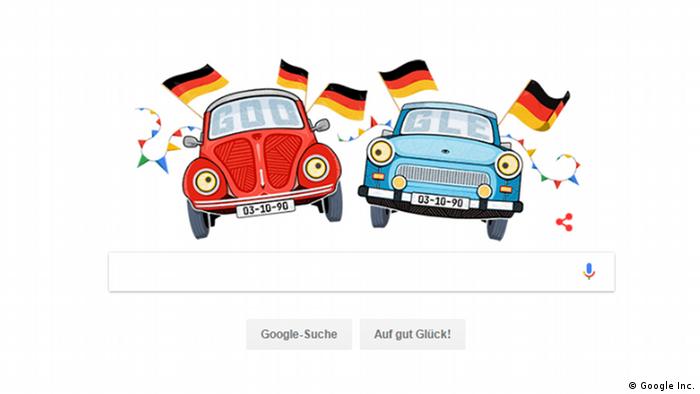 Google Doodle for German Unity Day in 2017: A VW Beetle and a Trabant

In 1991, the production was therefore discontinued. The region where it was made has, however, remained an important location for the German automotive industry. Volkswagen settled in Zwickau, Chemnitz and Eisenach and developed the Golf and Polo models there. Opel has been producing cars there since 1992, along with numerous new suppliers that call Saxony, Thuringia and Saxony-Anhalt their home.

While Germans are known for their love of luxurious cars, in the eyes of many, the Trabi remains a cult car. According to the Federal Motor Transport Authority, around 34,500 Trabants were registered in Germany at the beginning of 2019.

Trabant owners gather at different fan meetings held all over Germany every year, and different companies allow tourists to drive around in them as well.

Even Google has celebrated the East German car's iconic legacy. In its Google Doodle for the 2017 Day of German Unity, the tech giant created a whimsical image featuring a blue Trabi alongside a red West German Volkswagen.

They're enough to bring a tear to any car-lovers' eye. From VW to BMW, Opel to Mercedes-Benz - German carmakers have created countless cult models. Here are the best of the best. (14.03.2017)

The last Wartburg ever made rolled off the assembly line 25 years ago - and straight into a museum. Since then, this clunky-yet-spunky East German automobile has become a collector's item. Check out why. (08.04.2016)