This year, the Berlin Wall has been down for as long as it stood. But does the fact that so few physical traces of the old concrete border remain mean Germany is truly one? Tamsin Walker went in search of some answers.

WorldLink: The wall may be gone, but is Germany still divided?

It was just a few years after the Wall came down that I moved to what had been East Berlin. At a time when the eateries, drinkeries and swanky one-off shops that now line the streets of its geographical heart were but shadows on the horizon. Awaiting their arrival were rows of buildings whose crumbling facades held up a past that infused the present.

In those early days, gentrification was slow, but by the end of the nineties, the present had caught up with the past. Or so it seemed. Yet on reflection, perhaps the past was always a nose ahead. Perhaps it still is.

For weeks now, I've been asking any German willing to take the question, whether they feel the Berlin Wall lives on in the collective national psyche or whether the seams of their reunified country have dissolved.

East Berlin as it was

I was not expecting a single definitive answer, but a catalogue of nuanced yeses and nos. And that's pretty much what I got. But if I were to tally, the ayes would have it. The stated reasons are manifold, ranging from a discrepancy in pay, to the way people tell the time, to differing manners, mentalities and verbal expressions.

One friend told me, as we walked where the Wall was erected in August 1961 and where the windows of the houses overlooking it were bricked up, that she believes it will take several generations to blur into oblivion the lines that divide the country.

Not least, so her theory goes, because many people who grew up in the GDR still live in the communities of old, often without an influx of newcomers. They have each other and their shared memories, not only of times gone by, but of their post-Wall experiences.

Of hardship, perceptions and tourism

For many, that spelled unemployment and a general sense of disorientation that has made certain eastern areas fertile ground for right-wing populists, the Alternative für Deutschland, or AfD. More so, according to a March poll conducted by news outlet Spiegel Online, than in the "West."

Surely, such declarations of a geographical and political divide serve to harden the perception that Germany is not a single entity. Indeed, a common point raised among the nays in my private survey was a sense of dismay that the media continues to reference a partition they personally feel no longer exists. 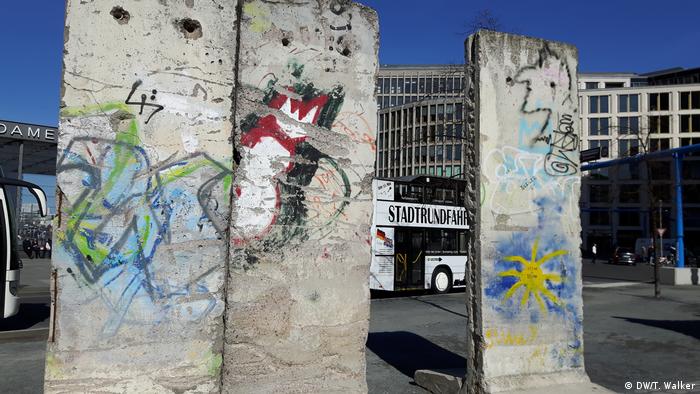 But apart from anything else, Berlin at least cashes in on its tale of two halves. At the Wall memorial on Bernauer Straße, I watched a steady stream of tourists take selfies against the eastern side of the concrete slabs that once served as the so-called anti-fascist protective wall - and in so doing, become part of this nation's history.

I walked along the old border myself, looking up at the rooftops and deep blue sky beyond. Nothing else was visible, and for a second, it was almost possible to imagine a Cold War Berlin.

But only for a second, because of the once 177 km long fortification, there are now just a few meters left, and to step out from behind them is to step into a single city in a reunified country. And though there is still baggage to work through, there is also no denying how far Germany has come since it became Germany.

Berlin, the city that keeps on giving

Though Berlin lives - to a degree - from its rap a hedonist's haven, it has more substance than the reputation that precedes it. Tamsin Walker scratched the surface to find a humble and humbling side to the city. (03.03.2017)

WorldLink: The wall may be gone, but is Germany still divided?