German Foreign Minister Heiko Maas and his Russian counterpart, Sergey Lavrov, have lauded their countries' cooperation. Relations have been strained over Russia's annexation of Crimea and the Ukraine conflict.

German Foreign Minister Heiko Maas met with Russian Foreign Minister Sergey Lavrov on Thursday on the sidelines of the 2019 Petersburg Dialogue, a two-day bilateral civil society forum being held this year in the German town of Königswinter, near Bonn.

Maas and Lavrov's attendance is the first time since 2012 that high-ranking government officials from both countries have taken part in the event.

The German Foreign Ministry said the discussions were centered on the preservation of the 2015 nuclear agreement with Iran, the future of arms control and the situation in eastern Ukraine. Relations between Russia and Germany have been strained over Russia's annexation of Crimea in 2014 and the ongoing conflict in eastern Ukraine.

The conflict and annexation have drawn international condemnation, along with sanctions against Russian companies and oligarchs.

Maas said that although Germany and Russia have different positions on eastern Ukraine and the annexation of Crimea, the two countries need to "work together on the political level" to find solutions, adding that the "constructive participation" of Russia was necessary to solve international issues.

"Without Russia, we will not find answers to the pressing issues in global politics," said Maas. 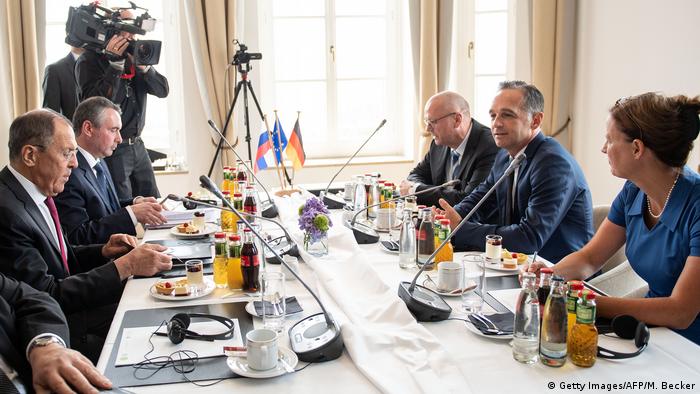 Maas and Lavrov also discussed the Iran nuclear deal, which was signed by eight countries including Russia and Germany, and was hobbled after the US dropped out in May 2018.

The German minister pointed out that Berlin still adheres to the deal, and that the US withdrawal was "unexplained."

"No one wants to see escalation in the region," said Maas.

Lavrov called the nuclear deal a "breakthrough" for the region, and accused the US of violating international law by dropping out, but urged Germany and the EU to take a "more principled" stance on the issue.

"All of the participants need to be involved in the process of helping implement and maintain the plan of action," said Lavrov.

The EU has been trying to salvage the nuclear deal, but has been unable to circumvent the crippling effect of US sanctions on Iran's economy. Iran has responded by enriching more uranium. Maas said on Thursday that Iran's actions were not acceptable.

German Chancellor Angela Merkel and Russian President Vladimir Putin were invited to the Petersburg dialogue in March, sparking high hopes for a reset in bilateral relations.

Although the two leaders decided not to attend, over 300 representatives from both countries did come to promote ties between Russian and German civil society.

"Today we have seen the potential of both our countries and societies in many areas," said Maas.

"Even though we currently have fundamentally different views on many issues, dialogue with Russia remains necessary. We will not find answers to urgent international issues without Moscow. What is more, we can only achieve lasting peace in Europe if we work together."

But despite the positive rhetoric, sanctions against Russia are set to continue until at least 2020, and Moscow is still accused of violating the Minsk agreements, a set international rules aimed at solving the Ukraine conflict.

Lavrov told the Rheinische Post newspaper on Thursday that the sanctions regime against Russia was doing damage to European budgets and job numbers. Some German politicians in the east of the country have even called for the sanctions to be lifted.

There is also concern in Germany over the emergence of Russia's "soft power" apparatus, either through state-controlled media, or oppression of free speech and civil society.

Ronald Pofalla, chairman of the Petersburg dialogue and a former CDU cabinet member in Merkel's government, welcomed Maas and Lavrov's meeting at the dialogue as a positive step in relations. However, Pofalla told DW on Wednesday that the "illegal annexation" of Crimea by Russia, the deadly violence in eastern Ukraine and the oppression of civil society will "never be acceptable."

"We will continue to work on rebuilding trust among people, trust that was called into doubt by political differences," said Maas in a press release.

The first Petersburg dialogue was held in 2001 between Russian President Vladimir Putin and former German Chancellor Gerhard Schröder in the Russian city of St. Petersburg, after which the dialogue is named.

A special friendship: Gorbachev in Germany

Mikhail Gorbachev is surely the most popular Russian in Germany. With his personable, open style, "Gorbi" won Germans' hearts even before the fall of the Berlin Wall. (10.11.2014)