Germany, France and Britain have called for "responsible" action to reduce tensions between Tehran and the United States. Iran has breached the terms of the 2015 nuclear deal by raising limits on uranium enrichment. 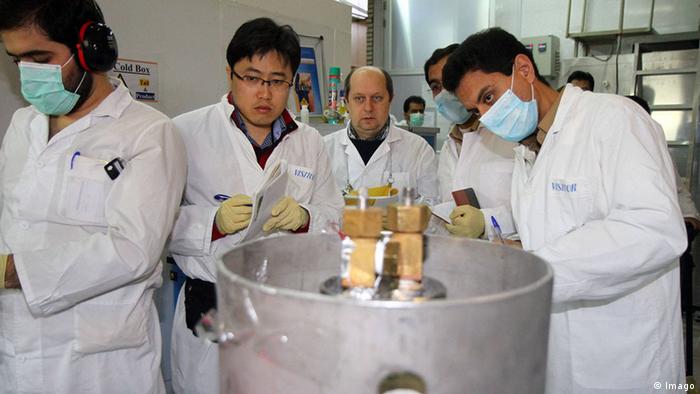 Three key European powers on Sunday called for ways to stop the escalation of tensions and to resume dialogue over Iran's nuclear program.

In a joint statement released by the Elysee Palace on France's Bastille Day, the leaders of Britain, France and Germany said "the moment has come to act in a responsible way" to avoid the 2015 nuclear deal falling apart.

"The risks are such that is is necessary that all the parties take a pause and think about the possible consequences of their actions," the statement added.

Over the past 10 days, Tehran has twice breached the terms of the landmark accord with six world powers — known as the Joint Comprehensive Plan of Action (JCPOA) — which sought to extend the time Iran would need to make an atomic bomb.

After US President Donald Trump last year abandoned US participation in the JCPOA and reimposed sanctions on the Islamic Republic, Iran raised the limits on uranium enrichment.

Iran's leaders are angry that its beleaguered economy is not benefiting from the sanctions relief it was promised under the accord.

Reacting to the violation, the European countries said on Sunday: "We are concerned by the risk that the JCPOA further unravels under the strain of sanctions ... and following Iran's decision to no longer implement several of the central provisions of the agreement."

Germany, France and Britain said they would continue to support the nuclear deal but that its implementation "was contingent on Iran's full compliance."

"We strongly urge Iran to reverse its recent decisions in this regard," their statement said.

The European Union has launched a workaround scheme to help companies avoid US financial penalties for trading with Iran, but the program is currently limited to food and medicine. Tehran has demanded the mechanism, known as INSTEX, be expanded to include its oil trade.

Iranian President Hassan Rouhani on Sunday said Tehran was ready to hold talks with the US if Washington lifts sanctions and returns to the 2015 nuclear deal.

"We have always believed in talks ... if they lift sanctions, end the imposed economic pressure and return to the deal, we are ready to hold talks with America today, right now and anywhere," Rouhani said in a televised speech.

Trump, however, said last week that sanctions against Iran would soon be increased "substantially."

Even so, Iranian Foreign Minister Mohammad Javad Zarif arrived in New York on Sunday to attend a United Nations meeting this week.

Iran-US hostility is not limited to the nuclear deal. Washington last month blamed Tehran for sabotage attacks on several oil tankers in the Persian Gulf. The standoff saw the US prepare air strikes on Iran that Trump called off at the last minute.

Tehran says it is raising its enrichment of uranium beyond the limit stipulated in the 2015 nuclear deal with world powers. The EU has urged Iran to reverse the decision and says it is debating the next steps. (07.07.2019)

Record German debt due to pandemic, but less than expected 10m ago