Iran and US trade barbs at international nuclear meeting

Backed by Moscow, Tehran said that Washington was using sanctions as "weapons of warfare." The US said Iran was using "nuclear extortion" to pressure other world powers by continuing to enrich uranium. 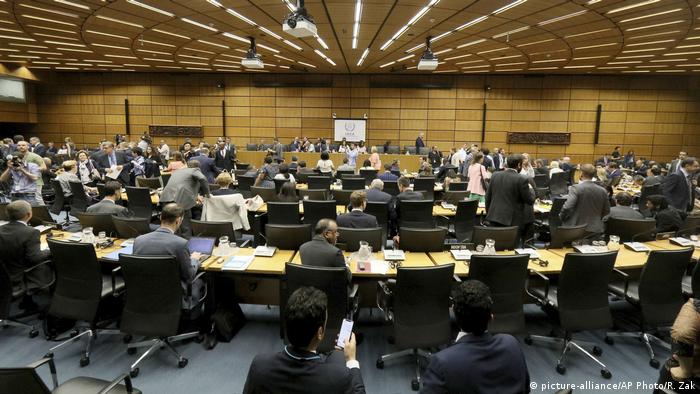 Iran and the United States traded accusations on Wednesday at a meeting of the International Atomic Energy Agency (IAEA) in Vienna. At the meeting of the 35-nation board of governors, Washington told other world powers not to give in to Tehran's "nuclear extortion."

The US had called the meeting in response to Iran's announcement last week that it had exceeded the amount of low-enriched uranium it is allowed to stockpile undera 2015 nuclear deal that the US has already pulled out of. President Donald Trump has reimposed economic sanctions, hoping to pressure Iran into a stricter deal.

"The only path to sanctions relief is through such negotiations, not nuclear extortion," said the US envoy to the IAEA, Jackie Wolcott.

"We are committed to denying Iran the benefits it seeks from these most recent provocations," she said. "It is imperative that this misbehavior not be rewarded, for if it is, Iran's demands and provocations will only escalate."

Earlier, Trump had lashed out against Iran's nuclear enrichment program on Twitter:

US sanctions 'neither legitimate nor legal'

Iran, for its part, called US sanctions "weapons of warfare." Envoy Kazem Gharib Abadi said that Washington's actions were "neither legitimate nor legal."

Abadi said it would return to a "full implementation" of the 2015 agreement, also known as the Joint Comprehensive Plan of Action (JCPOA), but only if "all participants" agreed.

The Iranian envoy also said that the current enrichment program was for peaceful purposes only, for energy production and medical purposes.

Russia backed its ally Iran at the meeting, with delegate Mikhail Ulyanov saying that the US could not both reject the deal and call for Tehran to completely stick to its stipulations.

"Although for some reason they only refer to Tehran, in fact the United States, who are refusing to fulfill its own obligations under the nuclear deal, lost any right to demand this from others," he said.

As the US and Iran continue down a path of increasingly tense diplomatic rows, French President Emmanuel Macron has taken a leading role in trying to save the JCPOA from Europe.

On Wednesday, his top adviser, Emmanuel Bonne, met with Iranian senior security official Ali Shamkhani. However, Shamkhani said afterwards that Tehran would not stop enriching uranium until it was granted its "full rights" under the deal by every country that signed it.

Iran also repeated its criticisms of Britain on Wednesday over the seizure of an oil tanker by Royal Marines in the Strait of Gibraltar. The autonomous British territory of Gibraltar is conducting an investigation into whether the Grace 1 tanker was illegally bringing oil from Iran to Syria, in violation of EU sanctions against the regime of Syrian President Bashar al-Assad.

Iranian President Hassan Rouhani, a key ally of Assad, said that the UK was "an initiator of insecurity and you will understand its repercussions."

Iran has suggested that it will boost uranium enrichment to 5% — well above the 3.67% cap set under the 2015 nuclear deal. Tehran has begun to row back on commitments after the US withdrew from the accord. (06.07.2019)