Tehran says it is raising its enrichment of uranium beyond the limit stipulated in the 2015 nuclear deal with world powers. The EU has urged Iran to reverse the decision and says it is debating the next steps. 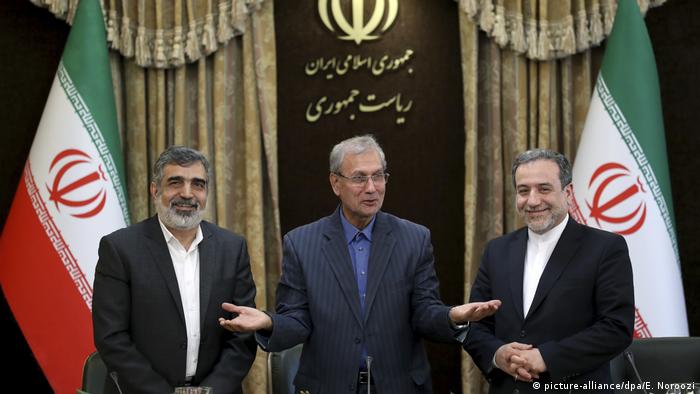 The Iranian government on Sunday said it would once again breach the 2015 nuclear deal by raising its enrichment of uranium beyond limits agreed with several world powers.

Government spokesman Ali Rabiei told a news conference that "today we will pass" the permitted enrichment level of 3.67%, without giving further details.

Iranian Foreign Minister Javad Zarif said the move was a countermeasure to "US economic terrorism."

He also described it as one of the "legal remedies" predicted in the nuclear deal, referring to its formal name of the Joint Comprehensive Plan of Action (JCPOA).

Later on Sunday, US Secretary of State Mike Pompeo warned that "Iran's latest expansion of its nuclear program will lead to further isolation and sanctions."

"Nations should restore the long-standing standard of no enrichment for Iran's nuclear program. Iran's regime, armed with nuclear weapons, would pose an even greater danger to the world," the top diplomat added.

The decision comes less than a week after Iran acknowledged breaking the deal's 300-kilogram (661-pound) limit on its low-enriched uranium stockpile.

Tehran said it would keep reducing its commitments every 60 days unless signatories of the pact moved to protect the country from US sanctions after the US pulled out of the deal last May.

The decision was condemned by fellow signatories of the JCPOA, with Germany saying they were "extremely concerned" at the news.

"We strongly urge Iran to stop and reverse all activities inconsistent with its commitments under the [nuclear deal] including the production of low enriched uranium" beyond the agreed limit, Germany's Foreign Ministry said in a statement.

The UK said Tehran has "broken the terms" of the 2015 accord.

"While the UK remains fully committed to the deal, Iran must immediately stop and reverse all activities inconsistent with its obligations," the British Foreign Office said in a statement. "We are coordinating with other JCPoA participants regarding the next steps under the terms of the deal, including a Joint Commission."

"The enrichment of uranium is made for one reason and for one reason only: it's for the creation of atomic bombs," said Israeli Prime Minister Benjamin Netanyahu. "The leaders of the P5+1 [other nuclear deal signatories] ... committed themselves to snap back sanctions the minute Iran did that. It just did. Where are you?"

Maja Kocijancic, a spokeswoman for the EU's foreign policy chief, Federica Mogherini, said the bloc was "extremely concerned at Iran's announcement," adding the remaining signatories would now decide on their next steps.

French President Emmanual Macron's office, meanwhile, said that a dispute resolution mechanism for the Iran accord will not be triggered for now.

Mehran Barati, an exiled Iranian politician, told DW that the Iranian decision appears to be "aimed at convincing Europeans to make more concessions" over trade with the Islamic Republic.

"At the same time, I believe that Washington's call for an IAEA meeting is good news for Tehran. It shows – to some extent – that the US does not want a military confrontation with Iran and prefers to use diplomatic means [to resolve the crisis]. The developments show that both sides do not want to aggravate the crisis," Barati added.

Iran had given the European Union a deadline of Sunday to find a way around the latest financial penalties imposed by Washington after US President Donald Trump last year withdrew from the landmark deal that sought to contain the Islamic Republic's nuclear ambitions.

The sanctions have blocked Tehran's oil sales abroad and targeted its top officials.

The 2015 deal was reached between Tehran and six world powers — the United States, Germany, France, Britain, China, and Russia — and saw Tehran agree to drastically scale down its nuclear program in exchange for relief from earlier sanctions.

INSTEX working but not enough

Germany and other EU countries have sought to keep the accord alive by developing a money transaction system known as INSTEX that allows Iran to circumvent US sanctions and continue doing business internationally.

But Iranian President Hassan Rouhani has dismissed the mechanism because it does not include Iran's oil sector.

Iran's president has warned Europe and the United States that it would completely ignore enrichment limits after Sunday. France warned that Iran would not gain anything by boosting enrichment levels. (03.07.2019)

US sanctions Russian research institute over suspicious malware 1h ago