A senior Iranian official has said that Tehran should retaliate after the Royal Marines confiscated an oil tanker. It is believed that the vessel called Grace 1 was headed for Syria, in violation of EU sanctions. 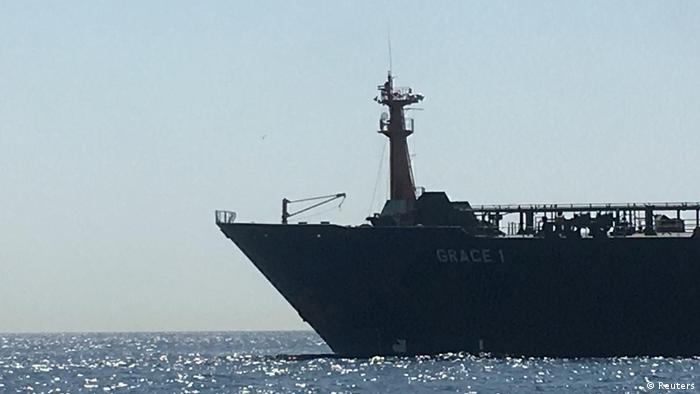 A commander with Iran's elite Revolutionary Guards said on Friday that Tehran should detain a British ship in response to the seizure of an Iranian oil tanker off the coast of Gibraltar.

"If Britain does not release the Iranian oil tanker, the relevant authorities will be duty-bound to take reciprocal action and seize a British oil tanker," commander Mohsen Rezai wrote on Twitter.

The top court in the British overseas territory also ruled that it can keep the ship for a further 14 days as it interviews the mostly Indian and Pakistani crew to determine whether or not it was attempting to flout EU sanctions against bringing oil to Syria.

In a statement, Iran's Foreign Ministry said that it had "described the UK move as unacceptable" to British Ambassador Rob Macaire and "called for the immediate release of the oil tanker, given that it has been seized at the request of the US."

The 330-meter (1,000-foot) supertanker known as the Grace 1 is a Panamanian-flagged vessel believed to have been en route to deliver oil to Syria at Iran's behest when it was seized by the Royal Marines.

Although the ship's paperwork says it was loaded in Iraq, tracking data has indicated that this was likely done in Iran.

Shipping experts have said that the Grace 1 probably passed through the Strait of Gibraltar instead of the more direct route through the Suez Canal to avoid regulations requiring it to unload some of its cargo.

Gibraltar's government said it is in the midst of interviewing everyone who was on board, but as witnesses and not as criminal suspects.

The standoff comes amid tense relations between Europe and Iran over a landmark 2015 nuclear deal that has been unraveling since US President Donald Trump pulled Washington out of the accord and reimposed sanctions on Tehran.

President Trump said on Friday that "Iran has to be very, very careful" about its next steps.

Iran's president has warned Europe and the United States that it would completely ignore enrichment limits after Sunday. France warned that Iran would not gain anything by boosting enrichment levels. (03.07.2019)