The crew of the Iranian oil tanker detained in Gibraltar by British marines have been interviewed as witnesses to find out what it is carrying, and where it was headed. Iran has demanded the release of the vessel.

A supertanker suspected of transporting oil to Syria in violation of EU sanctions was detained by British marines on Thursday off the coast of the British territory of Gibraltar.

The Grace 1 tanker was detained for trying to take oil to Syria in violation of European Union sanctions, a spokesman for the British territory said on Friday.

The crew of the tanker were being interviewed as witnesses, the spokesman said, in order to establish the nature of the cargo and its ultimate destination. Most of the crew were Indian and Pakistani nationals. Police and customs officials have remained on board.

Shipping intelligence publication Lloyd's List had been tracking the ship and the Panamanian-flagged tanker is thought to have been transporting crude oil from Iran and may have been headed for the Banyas Refinery in Syria.

"That refinery is the property of an entity that is subject to European Union sanctions against Syria," said Gibraltar's chief minister, Fabian Picardo. The refinery is a Syrian government-owned facility controlled by Syrian President Bashar Assad, and falls under the EU's Syrian Sanctions Regime.

The vessel, named Grace 1, was boarded in the early morning hours Thursday 4 kilometers (2.5 miles) off the Gibraltar coast, after it slowed down in a designated area used to ferry goods on board ships. 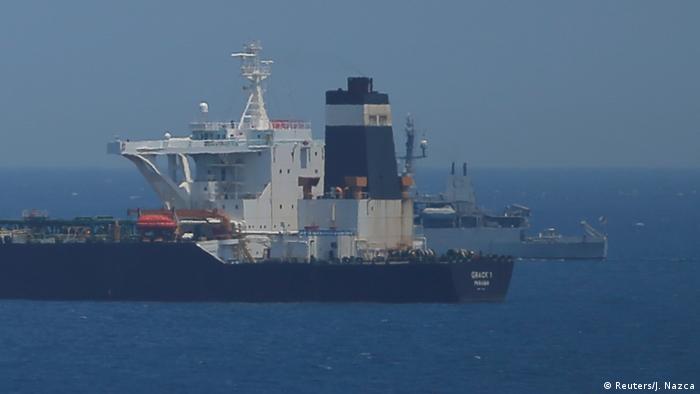 Iran demanded the immediate release of the tanker on Friday and the foreign ministry described the UK move as "unacceptable" in a statement.

The UK ambassador in Tehran had been summoned to a meeting on Thursday to hear a formal protest as the ministry "called for the immediate release of the oil tanker, given that it has been seized at the request of the US, based on the information currently available," the statement added.

Agence France-Presse reported that analysts at Lloyd's List said the ship had been loaded with oil off the coast of Iran in April and made a slow journey around the Cape of Good Hope en route to the Strait of Gibraltar.

Experts said the tanker had not been sending geographic signals while in Iranian waters.

Iran has provided military support to Assad, including credit lines for oil. However, this aid has largely been choked off by renewed US sanctions. The EU issued sanctions against the regime of Syria's Assad in 2011.

If the tanker is confirmed to have been carrying Iranian oil, it would come at a difficult time in EU-Iran relations, as the block weighs a response to Iran's defiance of the faltering 2015 nuclear deal.

The EU has tried to maintain neutrality as tensions between the US and Iran have grown over US sanctions designed to bar all oil exports. Carrying Iranian oil to Syria would violate both EU and US sanctions.

On Thursday, a British Foreign Office spokesperson said: "We welcome this firm action by the Gibraltarian authorities, acting to enforce the EU Syria Sanctions regime."

The European Commission said Thursday that it had no information on the case, and that implementing sanctions was a matter for the member states.

Read more: Gibraltar between rock and a hard place on Brexit

Josep Borrell, Spain's acting foreign minister, said that he was looking into how the seizure affects Spanish sovereignty, as he claims it seems to have taken place in Spanish waters.

Borrell was reported to have said that Gibraltar has detained the ship on the request of the US.

Gibraltar is located on the Mediterranean Sea at the southern the tip of the Iberian Peninsula, and Spain does not recognize the waters around the territory as British.