Some 128,000 people are thought to have been murdered in Syrian jails at the hands of the Assad regime. Thousands were tortured to death. Now, Europe is leading the charge to bring the perpetrators to justice.

Germany: The hunt for Assad's henchmen

Western nongovernmental organizations (NGOs) have their hands on more than 800,000 files that once belonged to the Syrian intelligence apparatus. They were taken from regime facilities during a time when opposition forces had the upper hand in some parts of the country. They were then smuggled out of the country by NGOs.

The Washington-based Syria Justice and Accountability Centre (SJAC) has now published an analysis of the documents which shows that the upper echelons of Syria's leadership carry direct responsibly for Syrians who were tortured after anti-regime protests began in 2011.

"This is the first time in Syria's history that evidence concerning the highest level of the Syrian government has been unveiled," said SJAC director Mohammad Al Abdallah.

His organization examined close to 500,000 pages of Syrian intelligence apparatus documents and on Tuesday published a comprehensive analysis of the files. Most documents were smuggled out of Tabqa and Raqqa beginning in 2013, and out of Idlib in 2015 after Syrian forces were dispelled from the region.

The SJAC says the study is a "record of the decision-making process of the Syrian intelligence agencies, exposing not only serious human rights violations, but also the extent to which these agencies permeate every aspect of Syrian life." It also makes clear that Syria's secret service began making a list of dissidents as of 2011. In a letter dated June 13, 2011, the director of Syria's political secret service tasked all department heads with gathering information on key figures behind the protests against President Bashar Assad "within 24 hours." Many of these dissidents were then arrested and later tortured. 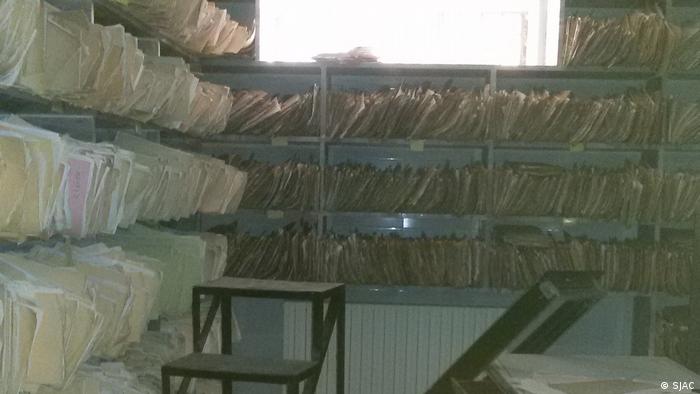 Thousands of government documents were smuggled out of Syria

More than 26,000 images of torture victims, captured by a former Syrian military police photographer, were also smuggled out of Syria. This evidence is currently being used by investigators and public prosecutors in various European states, including Germany, to go after Assad's henchmen.

The Commission for International Justice and Accountability (CIJA), meanwhile, is in possession of a veritable treasure trove of secret Syrian documents. Some 800,000 files were smuggled out of the country by the organization when the Syrian civil war began. Since then, several dozen analysts have been poring over the files to extract crucial information needed to go after Assad and figures within his government. The organization, which is registered in the Netherlands, receives funding from several European states, including Germany and the United Kingdom.

Investigators under CIJA head William Wiley have detailed the chain of command within the four branches of the Syrian secret service, ranging from sub-divisions in cities and provinces all the way up to the Central Crisis Management Cell. It was created by the ruling Baath party to suppress the Syrian uprising. The head of this cell is Assad himself.

Wiley used to work as a UN investigator at the International Criminal Tribunal for the former Yugoslavia and at the International Criminal Tribunal for Rwanda. Back then, his investigation into the siege of Sarajevo by former Bosnian Serb leader Radovan Karadzic was complicated due to lack of evidence. The situation is different regarding the crimes committed by Assad. Wiley possesses a transcript of a Central Crisis Management Cell meeting on August 5, 2011 that indicates the Syrian leadership ordered daily raids against "protest organizers" and those who "tarnish Syria's image in foreign media." 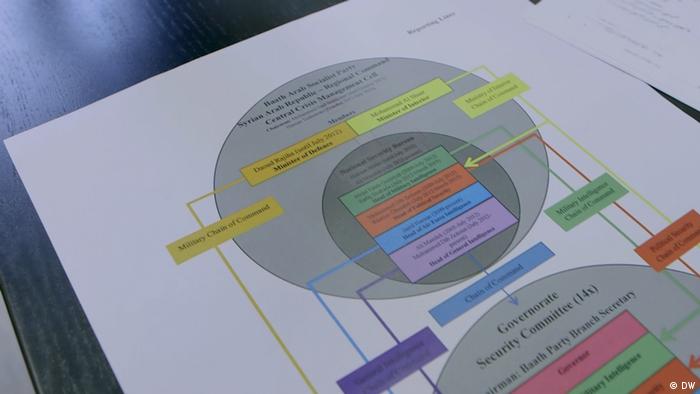 Wiley told DW that this document helps shed light on why Assad persecuted thousands of Syrians. "We know the identity of a great many of these victims now and they were in the main low level activists. Or in many cases normal people [who] were not politically engaged but were perhaps connected to people who were politically engaged with the opposition or suspected of engagement," he said. Wiley is certain these documents will make it possible to indict Assad of crimes against humanity in an international court, namely when his allies urge him to go into exile.

Wiley said this is a pattern he has observed before: "The former president of Cote d'Ivoire, he stepped down from power, thought he had sanctuary in a neighboring state and ended up going to the Hague. And Charles Taylor, former president of Liberia, the same thing, a deal was done. He went into exile but then he went from exile into prison."

Wiley believes this will be Assad's fate, as well. "The evidence of the engagement of President Assad in absolutely heinous war crimes and crimes against humanity is indisputable," he said.

If Assad is brought to court, much will hinge on the security apparatus documents smuggled out of Syria. They are already being used in Europe to take legal action against figures within the Assad government.

Earlier this year, French police arrested a former Syrian secret service agent. Germany has arrested two further agents, among them Anwar R., who is presently remanded in custody. Germany's public prosecutor accuses the man of having headed a Damascus secret service department and of being responsible for torture.

Wiley said European investigators are currently going after 10 to 12 similarly high-ranking Syrian figures. "There could be more in Europe, " he added. "There are certainly more outside of Syria."

The kidnapped German journalist who gave birth in Syria

German journalist Janina Findeisen was seven months pregnant when she traveled to Syria in 2015. She was kidnapped and held hostage for nearly a year, ultimately giving birth to her son while in captivity. (09.04.2019)

Germany: The hunt for Assad's henchmen