Widow of prominent IS terrorist reportedly living quiet life in Germany | Germany | News and in-depth reporting from Berlin and beyond | DW | 16.04.2019 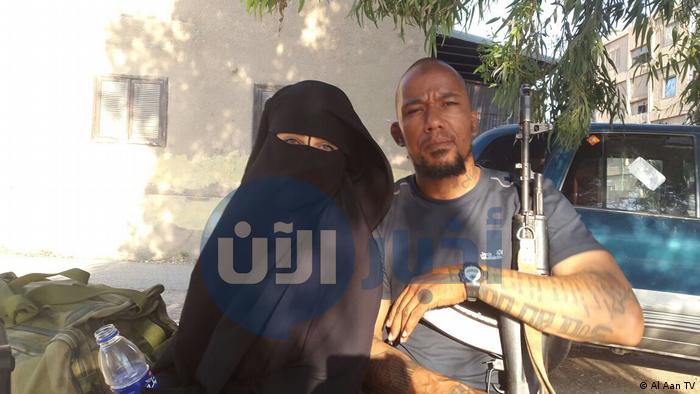 Late IS terrorist Denis Cuspert with Omaima A.

When Jenan Moussa, an acclaimed war reporter for the Arab TV channel Al Aan, received the contents of a smart phone from a "trusted source," she immediately knew she had been handed a treasure trove.

The phone, she says, belonged to an Omaima A. — a German citizen of Tunisian descent. The contents of the phone — thousands of chat messages and photographs, as well as flight details and screenshots of official papers — document Omaima A.'s journey from Germany to the self-proclaimed Islamic State (IS) in early 2015.

Only a few months earlier, the terror group had proclaimed its "caliphate."

'Uncensored' insights into life under IS

"The moment I saw the content I realized this is an uncensored view on the life of an ISIS woman," Moussa told DW.

She spent months trawling through the data and this week published some of the photos and documents, along with a longer TV report. While DW has been unable to independently verify the photos, they indeed provide a fascinating insight into the young woman and life in and among IS.

Born in the summer of 1984 in the northern city of Hamburg, Omaima A. seemingly fell in love with and married a man, Nader Hadra. He moved in Salafist circles and was acquainted with some of Germany's most prominent Islamist extremists. Omaima A. and her three children, Moussa says, then followed him to Syria. 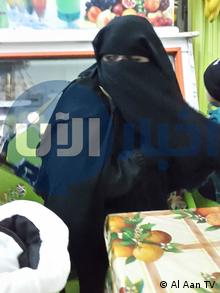 This photo appears to show Omaima A. with a rifle slung over her shoulder

Photographs from early 2015 depict first impressions of life in IS territory: its infamous black flags dangling from lampposts and snapshots of propaganda posters. Other photos show young children — whom Moussa has identified as Omaima A.'s own children — sporting IS hats and flags and playing with guns.

In one image, a veiled woman Moussa identifies as Omaima A. is holding what appears to be a Kalashnikov.

Even as IS fighters were sweeping across Syria and Iraq, killing, torturing and enslaving countless people, the data combed from the smartphone document a different side of life under the caliphate: family outings to juice bars and a river — and numerous cheerful selfies.

Moussa also found what she says is IS propaganda on the phone: One image shows a meme of two masked fighters in front of the Reichstag, Germany's parliament building. The German caption reads: "Revenge will be on your doorstep."

After her husband Nader Hadra was killed during the fighting in Kobane, Omaima A. apparently received a so-called "martyrdom compensation" and remarried. The photos strongly suggest that she took up with one of Germany's most notorious radical Islamists, Denis Cuspert, a rapper turned IS fighter who went by the name of Deso Dogg.

In early 2015, Cuspert was added to the United States' terror list. He is believed to have died in early 2018 in Syria.

One Islamist, who once moved in the same radical Salafist circles in Germany as Omaima A.'s two suspected husbands, told DW "she was not unknown." He said that while he had never met her, he was aware that she had been both active on social media in Germany "and over there," meaning Syria.

Moussa also points to evidence suggesting that Omaima A. ran social media accounts for IS while in Syria.

Evidence from a phone left or lost

It is unclear whether Omaima A. lost her phone in Syria, which Moussa says contains 36 gigabytes of material, in late 2015, or whether she deliberately left it behind when she decided to return to Germany.

At what point exactly she arrived back in her home town Hamburg with her children is also unclear. Moussa believes it may have been in late 2016.

Moussa expressed surprise that Omaima A. has, so far, escaped criminal proceedings. However, many of those who returned to Germany from Syria and Iraq, including female IS returnees, were placed under surveillance.

Moussa personally traveled to Hamburg to confront Omaima A. with her findings. However, she says she only talked to Omaima A.'s underage daughter, who denied that her family had ever visited Syria. When Moussa later spoke to Omaima A. on the phone, she was hung up on, twice.

Attempts by DW to reach out to Omaima A. were also unsuccessful.

A since-deleted LinkedIn account, which Moussa says belongs to the same Omaima A., shows a carefully made up modern woman, her hair tied back in a ponytail, who describes herself as a translator and event coordinator.

"She just picked [up] her life, lived normally and was never charged or arrested by the authorities," Moussa says.

But it's likely that the authorities knew as early as 2015 that Omaima A. left for Syria: A copy of an official document which, again, DW has been unable to verify, informs Omaima A. that her social benefits have been revoked on the grounds of her "departure abroad (Syria)."

So if Omaima A. was known to the authorities in Germany, why was she never arrested?

According to German law, an arrest warrant can only be issued in the case of an urgent suspicion that the person in question has indeed committed a crime.

Until recently, German courts generally took the stance that simply living in IS-controlled territory was not enough to justify criminal proceedings. Rather, the prosecution had to prove that a woman like Omaima A. actively supported the terror group.

Given that many women who joined IS took on less public roles than their husbands, who often glorified their actions on social media, active involvement is much harder to prove. 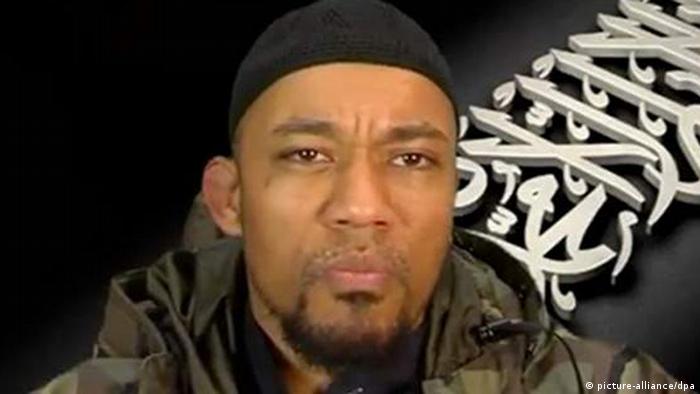 Cuspert, aka Abu Talha al-Almani, previously known as rapper Deso Dogg, is believed to have been killed in 2018

Denis Cuspert, one of Omaima A.'s alleged husbands, posed in several IS propaganda videos. In one he is holding a severed head.

Upon their return to Germany, many women claim they were coerced or duped by their husbands and never supported terrorist ideology.

In 2018, a total of 865 legal proceedings were initiated in Germany on the grounds of Islamic terrorism by the Federal Prosecutor's Office. Women make up only a small fraction: Five arrest warrants were issued against female IS returnees. Only in two cases were criminal proceedings launched.

One of them is a landmark case currently underway in Munich against Jennifer W. The German-born woman is accused of allowing a 5-year-old Yazidi "child slave" to die of thirst while she lived in Iraq. State prosecutors are accusing Jennifer W. of war crimes, murder and membership in a foreign terrorist organization. 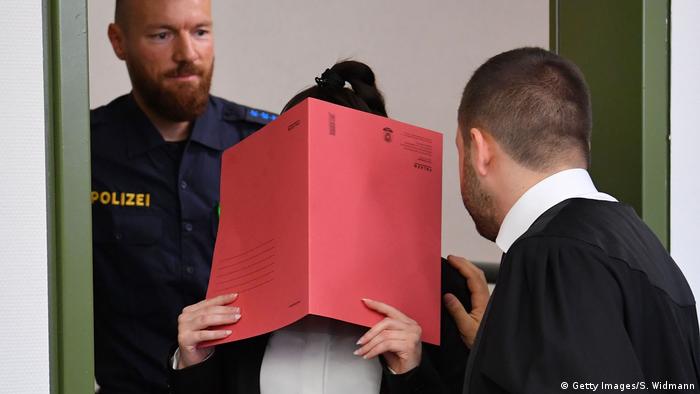 If the documents that Moussa obtained via a smartphone found in Syria are indeed authentic, it is likely that the Federal Prosecutor's Office will take a closer look at Omaima A.'s case. The photos on the phone depict a woman who seems to have willingly embraced the self-proclaimed caliphate's ideology, while the documents contained on it also suggest that Omaima A. may have been fundraising for radical Islamist circles.

Various officials DW contacted were unwilling to publicly comment on the material Moussa obtained. But in the case of new evidence, prosecutors are able to launch new investigations. As one source told DW, Omaima A. "is no stranger to us."

The head of Germany's domestic intelligence agency has warned against underestimating the threat posed by "Islamic State" despite the militant group's apparent defeat in Syria and northern Iraq. (14.04.2019)

Shamima Begum, a London teen who left to join the "Islamic State" group in 2015, is set to lose her UK citizenship. The case has spurred debate about how Britain will deal with former IS fighters, brides and children. (19.02.2019)