A report has revealed new allegations of sexual torture, rape and forced nudity across 30 Syrian detention centers, at home raids and government checkpoints. But justice for survivors is proving a long road. 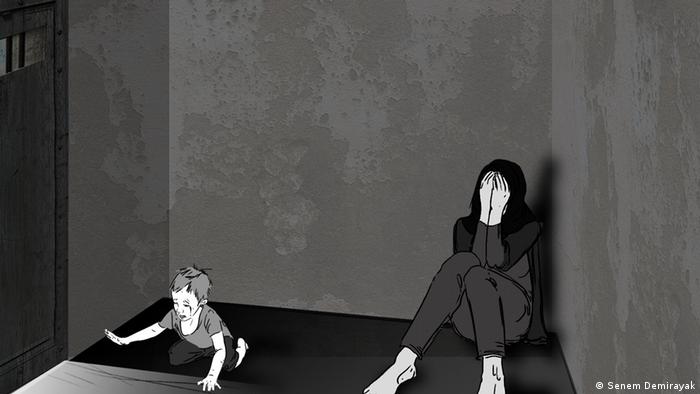 An analysis of Syrian survivors' interviews from 2012 to date details new accusations of what authors call systematic sexual and gendered violence at state-controlled detention facilities, government checkpoints and house raids by the Syrian army.

The report, entitled "Do you know what happens here?," was named after testimony from one witness who, during interrogation, was said to have been asked the question before being led into a room where a detainee was being sexually assaulted by a guard.

The Washington-based Syrian Justice and Accountability Center (SJAC) penned the report as part of efforts to deliver transitional justice, including reducing shame and stigma, potential truth commissions and possible prosecutions.

Of the 315 interviews collected at random in areas researchers had access to in Syria and neighboring countries, 91 were identified as possibly containing evidence of sexual or gender-based violence (SGBV). Fifty-six of those were said to indicate crimes such as rape, threats of sexual violence, torture of genitals and restricted access to reproductive care against both males and females.

Instances of gang rape at government checkpoints were documented alongside more frequent sexual attacks by multiple perpetrators during home raids. The SJAC said in those raids, state security forces appeared to systematically rape women and girls, sometimes in front of family members suspected of political opposition or avoiding conscription. 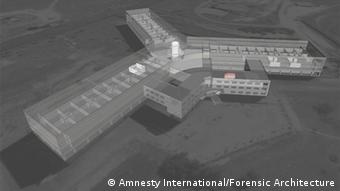 An Amnesty impression of Syria's Sednaya jail and crematorium

The majority of the accounts featured accusations of sexual torture, rape and forced nudity across 30 different army and police detention centers, ordered and perpetrated by both low-level and senior officials, suggesting "a coordinated, widespread and systematic pattern of violence," according to the report's authors.

The SJAC told DW that evidence from such a broad range of government controlled detention centers suggested a deliberate strategy that had been ordered, but if the violent acts were more of a practice that was allowed to happen, then commanding officers were still responsible because they "should have known."

One of the authors, Hannah Grigg, said what was so striking about the testimonies was that they "lined up almost exactly" with the findings of the UN Commission of Inquiry's (UNCOI) 454 interviews detailing SGBV allegedly perpetrated by the Syrian government and armed groups "as a tool to instill fear, humiliate and punish."

"One of the scary things reading through them is realizing how routine it starts to feel," Grigg told DW. "The first time you read one of these stories it's so horrific, but as you read one after the other you realize that many of these situations are just being repeated over and over again … through some kind of a system that's being perpetrated on them," Grigg said.

Due to the limited scope of the SJAC's activities it could not corroborate allegations of sexual violence perpetrated by other armed groups documented by the UNCOI.

However, the organization has previously reported on violations by opposition groups, Islamic State and other parties in the conflict. Grigg said the report covered a "very small piece" of the phenomenon of sexual violence happening more broadly in the conflict, which has also seen a rise in child marriage and violence between civilians in camps.

Yale University expert Elisabeth Wood said the report was "very credible" due to its range of interviews, methods and prioritization of survivor health and confidentiality.

"Importantly, the survivors had not been interviewed by researchers from other organizations, so these are new allegations," Wood told DW. "Moreover, the report documents sexual violence, particularly sexual torture, against boys and men, a pattern too often overlooked in SGBV investigations."

Grigg said the gendered aspect of the alleged crimes was important to note because the stigma survivors suffered when they returned to their communities often resulted in years of denial and silence. Such a culture hampers efforts at rehabilitation and restorative justice.

The SJAC hopes the testimonies it has collected will be used in future efforts to identify perpetrators and prosecute them as part of its mission for transitional justice, but legal avenues have proven difficult.

Because Syria is not a party to the International Criminal Court and previous attempts to bring cases to the UN Court of Justice have been blocked in the Security Council, some European countries have in recent years attempted to prosecute alleged perpetrators on European soil. But the prospects of bringing senior Syrian officials to justice are unclear.

In 2017 a group of Syrian refugees filed a suit in Germany naming several high-ranking Syrian officers and in 2018 German prosecutors issued a warrant for Syrian intelligence chief Jamil Hassan for crimes against humanity.

In February this year, France and Germany arrested three suspects in a case that has complicated notions of justice.

Anwar R. was accused of carrying out wide-ranging torture during his time as a senior official at a government detention center before he defected in 2012, participated in opposition talks and claimed refugee status in Germany in 2014. As the SJAC reported, Syrians were split over the choice to arrest him, with some citing experiences of his kind treatment and others claiming the arrest would discourage future defectors.

But many were encouraged by the news and argued nothing could mitigate his alleged crimes. Syrian human rights lawyer Anwar al-Bunni reportedly said "A change in the position or attitude of a person does not exempt him from prosecution for crimes he has committed, especially crimes against humanity."

Where the legal possibilities of transitional justice have been fraught, the work of the SJAC still hopes to give survivors a voice and avenues for rehabilitation by documenting their stories.

While those inside Syria are quietly referred to health professionals by the SJAC and other organizations, the millions living in camps in neighboring countries such as Turkey have few options, according to a 2018 report by a European torture survivors network.

In Germany, where a large number of Syrians have been able to find asylum, the public health system is not very well adapted to refugees' needs, despite a recent rise in funding, according to Elise Bittenbinder at the German network for refugees and torture victims (BAfF).

"Definitely not everybody who is in need of help will get it, because there are a lot of barriers in all the systems in Europe," Bittenbinder told DW. She listed identification, distance to treatment centers, long wait times and the difficulties in survivors even accepting help as some of the factors that hinder access to assistance.

But for Bittenbinder, whose organization operates 41 psychosocial centers  across Germany and conducts outreach and information sessions at reception centers, "justice is very crucial."

"Very often you will find that people tell you I don't want healing … They come and say I want justice. I want the suffering I have gone through to be acknowledged. I want that other people don't have to go through the same experience; that's why I want to make it public."

If you or someone you know has been affected by any of the abuses mentioned in this report, please contact the European Network of Rehabilitation Centers .

The EU and North Macedonia: More 'trauma' before membership?