A group of former prisoners from Syria has filed a suit in Germany accusing officials of the Assad regime of torture. The survivors reported beatings, sexual abuse and systematic humiliation in Syrian prisons. 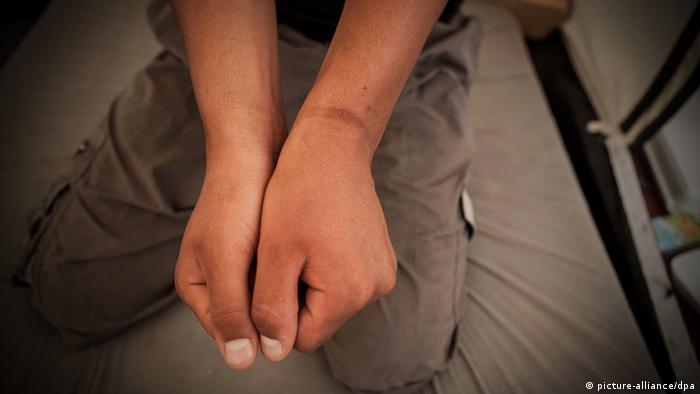 "Turning torture victims away is horrible"

On the UN International Day in Support of Victims of Torture, Dr. Mechthild Wenk-Ansohn talks to DW about the work of the Berlin Center for Torture Victims. (26.06.2014)

Over 17,000 detainees have died in Syrian government custody in the past five years from torture and disease, according to Amnesty International. Forced disappearances and horrific prisoner abuse are also widespread. (18.08.2016)

Seven torture survivors named several high-ranking officers in the Syrian military intelligence service as responsible for the mistreatment they suffered in Damascus, German media reported on Wednesday. The plaintiffs include men and women between the ages of 29 and 55 who spent time in one of the three detention centers set up by the Syrian President Bashar al-Assad's regime after the 2011 rebellion started. They all arrived in Germany as refugees before addressing federal prosecutors in the German city of Karlsruhe.

"For the refugees living in Germany, it is important to know that they are not just getting security and food, but also justice," said Syrian lawyer Mazen Darvish.

The suit covers alleged crimes against humanity and war crimes, which makes it possible for German authorities to launch a probe, according to Wolfgang Kaleck from the European Center for Constitutional and Human Rights (ECCHR).

"Torture is not an exception in Syria - it's a well-established practice, and it has been going on for years," Kaleck said.

The survivors reported being beaten, sexually abused, made to stand on one leg until they passed out, with their jailors not letting them go to the toilet and punishing the prisoners by using their own excrement.

"I thought I was there to die," survivor Munem Hillaneh told the German daily "Süddeutsche Zeitung," which was one of the outlets to report the story in addition to public broadcasters WDR and NDR.

Another plaintiff, Chalid Ravas, said he was surprised by the attitude of the prison staff who tortured prisoners.

"They laughed, they made tea, they didn't looked stressed at all," he told the German news agency dpa.

According to the ECCHR, the Syrian regime has been torturing people "systematically and indiscriminately" for years before the civil war started in 2011. The survivors hope that German courts would respond by issuing arrest warrants against the accused officers.

The material gathered in the German probe could also eventually be used before a potential war crimes tribunal dealing with the conflict in Syria.