Fighters for the "Islamic State" terror group are raping and torturing Sunni Arab women in areas they control in Iraq, Human Rights Watch reports. Similar abuses against Yazidi women have been well documented. 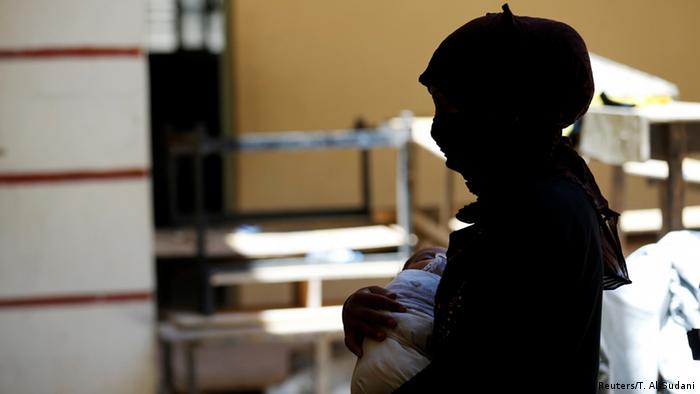 HRW said its researchers interviewed six women who had escaped from the town of Hawija, in northern Iraq south of Mosul. It was the first time the group had been able to document IS abuses against Sunni Arab women in Iraq.

"We hope that the international community and local authorities will do all they can to give this group of victims the support they need," deputy Middle East director for Human Rights Watch (HRW) Lama Fakih said.

One of the women interviewed, whose name was given as Hanan, told HRW she tried to escape from Hawija with her children several weeks after her husband fled. The group she was traveling with got caught by IS and she was taken to a house where she was told her husband was an apostate and that she had to marry an IS leader. When she refused, she was beaten, and then raped daily in front of her children.

Similar abuses against Yazidi women have been reported by HRW and other organizations.

HRW said experts had said Sunni Arab victims of IS gender-based violence and their families often remained silent about the abuse to avoid stigmatization or harming the woman or girl's reputation. The organization called for increased efforts to tackle the stigma around sexual violence, awareness about the best ways to support victims and more resources to provide mental health care to displaced people who had lived under IS.

IS, which claims to follow a type of Sunni Islam as it was practiced at the time of the Prophet Muhammad, proclaimed a "caliphate" in Iraq and Syria in mid-2014. Much of its territory has since been taken back by Iraqi security forces backed by an international coalition.

The group's fighters often justify the rape and enslavement of women from minority groups like the Yazidi by labeling them infidels. Many of the accounts by the Sunni Arab women mentioned that IS fighters had accused them of apostasy before abusing them.

Pakistani authorities have claimed retaliation for a terrorist attack at a shrine that killed 88 people. The attack spurred fears that the so-called "Islamic State" has a growing foothold in the country. (17.02.2017)

Children of Dutch Islamic State fighters could pose a threat at home, a new report has suggested. The secret service has recommended treating them as "jihadi travelers" because they may have received battle training. (15.02.2017)