Pakistani authorities have claimed retaliation for a terrorist attack at a shrine that killed 88 people. The attack spurred fears that the so-called "Islamic State" has a growing foothold in the country. 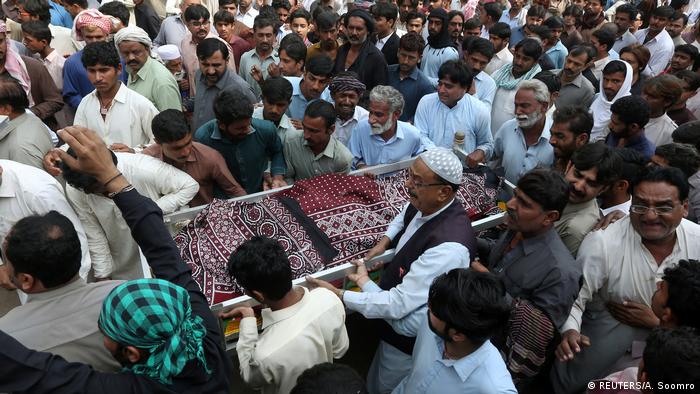 Over 70 people have died in a suicide attack on a shrine in the southern Sindh province. The attack, claimed by the so-called "Islamic State" group, indicates that the militants consider pluralistic Islam a threat. (17.02.2017)

Pakistan's military said on Friday it had eliminated scores of militants following the deadly attack at the Sufi shrine of Lal Shahbaz Qalander on Thursday.

Security forces had carried out sweeping raids across the country following the attack, the responsibility for which was quickly claimed on Thursday by the so-called "Islamic State" (IS) terrorist organization.

The public relations wing of Pakistan's military said on Twitter it had made significant progress since the attack.

"Over 100 terrorists have been killed since last night," the military said.

Thursday's bombing rattled the country, sparking fears that IS could be gaining influence in Pakistan just as optimism over the future of its security grows following a decade-long war on terrorism.

On Friday, Prime Minister Nawaz Sharif and Army Chief of Staff General Qamar Javed Bajw visited the site of the attack, where Sharif vowed to eradicate terrorism "with the full force of the state."

Lal Shahbaz Qalander, in the town of Sehwan in southern Sindh province, is the country's most important shrine in Sufism. The bombing took place on Thursday, a sacred day of the week when worshippers pack the holy site for the weekly devotional dance of Dhamal.

Sehwan has limited emergency services, and authorities had to transport the victims to a hospital 130 kilometers (81 miles) away.

The bombing is also the latest in a series of attacks carried out by rival Sunni militant groups, including IS and the Pakistani Taliban. The latter claimed responsibility for a large blast on Monday that killed more than a dozen people in Lahore.