The Lahore bombing and Pakistan′s misplaced priorities | Asia | An in-depth look at news from across the continent | DW | 14.02.2017

While Pakistani authorities were busy banning Valentine's Day and cracking down on those planning to celebrate it, a suicide bomber killed 13 people at a rally. What does the incident say about the country's priorities? 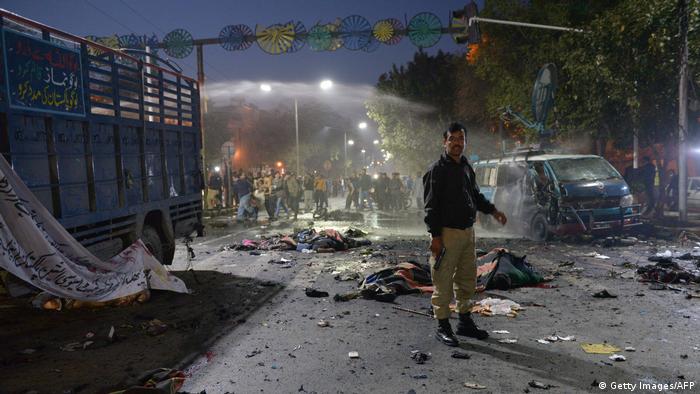 Prior to Monday's terrorist attack in the eastern city of Lahore, authorities had been raiding gift shops in urban centers, arresting fun-loving youngsters for buying kites for the basant (spring festival) or heart-shaped balloons and chocolates for Valentine's Day.

The crackdown on those wanting to celebrate Valentine's Day will continue on Tuesday in compliance with the orders of a court in Islamabad that decided to ban the "Christian" and "Western" event. For Pakistani authorities, Valentine's Day celebrations are "immoral," "vulgar," and not in accordance with Islamic teachings.

Amid this security clampdown on a benign activity, a suicide bomber belonging to the Jamat-ul-Ahrar faction of the Tehreek-i-Taliban Pakistan (TTP) snuck into a protest rally in Lahore and blew himself up. At least 13 people were killed and some 85 were injured.

Pakistanis are angry not only because another terrorist attack has claimed so many lives, but also because they feel the priorities of the state are totally misplaced. Instead of acting against banned militant groups, the government is banning cultural events, and ironically, the intention is to appease Islamic groups.

Arshad Mahmood, an Islamabad-based social media activist and writer famous for his hard-hitting anti-establishment posts, lampooned the authorities after the Lahore bombing. "Terrorist attacks like the one that happened in Lahore on Monday are bound to happen in Pakistan. No wonder that Islamists can strike whenever they want because our government and policymakers consider heart-shaped balloons a bigger threat than militancy. Such a confused nation we are," Mahmood wrote on Facebook.

Experts say that over the years, thousands of people have been killed in terrorist attacks perpetrated by Pakistan-based Islamist groups, but instead of re-evaluating its own flawed security policies, Pakistan's establishment continues to point fingers at neighboring India and Afghanistan.

Although Jamat-ul-Ahrar claimed responsibility for the Lahore bombing, many in Pakistan accused Indian spy agencies of carrying out the attack. Some even say that the blast was a conspiracy to sabotage an upcoming cricket match in Lahore, which would have resumed cricket competitions in Pakistan. International cricket teams haven't played in Pakistan since a 2009 militant attack on the Sri Lankan national team in Lahore. Many international cricketers are taking part in the ongoing Pakistan Super League tournament. While the group matches are being played in the United Arab Emirates, the final was scheduled to be played in Lahore's Gaddafi Stadium.

But Fasi Zaka, a renowned columnist, believes the Lahore blast connection with the cricket match is preposterous.

Many analysts say that India and Afghanistan also react to terror attacks by blaming Pakistan and that is how all these countries try to conceal their own shortcomings and responsibilities.

"The 'Indian agents' thinking is deeply entrenched not only in the mindset of our policy-makers, but also among the general public. Unfortunately, the media too promotes the 'foreign forces-did-it' narrative," Zeenia Shaukat, an activist working for a labor rights institution in Karachi, told DW.

There had been a relative lull in terrorist attacks in Pakistan since June 2014 when the South Asian country's army began an offensive against militants in its restive Waziristan area. Since then, the government has been claiming that operation "Zarb-e-Azb" has crippled the Pakistani Taliban and numerous al Qaeda-affiliated groups. It also says that the capacity of these banned outfits to launch attacks has been significantly reduced.

Aqil Shah, a Pakistani expert and the Wick Cary Assistant Professor of International Affairs at the University of Oklahoma, said that there is a fundamental contradiction in the Pakistani military's counterterrorism approach, pointing out that while the army goes after the terrorists who carry out attacks in Pakistan, it patronizes those who attack its enemies.

"The army has fought hostile factions of the TTP, but it continues to use other militant groups as proxies against arch-rival India," Shah told DW in an interview, citing the Haqqani network and the Afghan Taliban, which help maintain Pakistan's influence over Afghanistan, as well as Lashkar-e-Taiba, which fights Indian security forces in Kashmir.

Experts say that Pakistan is facing an existential threat but the authorities are not taking it seriously. Apart from the threat from the Taliban, the Middle-Eastern Islamist group "Islamic State" (IS) is expanding in Afghanistan and is also increasing its presence in Pakistan. Jamat-ul-Ahrar, which claimed responsibility for the Lahore attack, swore allegiance to IS in September 2014. A number of other Taliban splinter groups have also joined the IS ranks.

"We are facing a war-like situation. There is a lack of coordination among government agencies. I also think that the civilian and military leaders are not on the same page regarding counter terrorism approaches," Karachi-based journalist Majid Siddiqui told DW.