State premiers in eastern Germany want to end crippling sanctions against Russia. With the far-right Alternative for Germany gaining ground in the east, that position has more to do with politics than anything else. 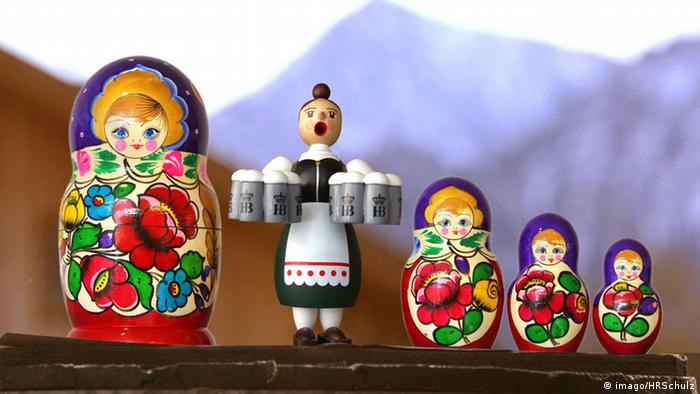 Political leaders from Germany's formerly communist eastern states are calling for an end to hefty economic sanctions against Russia, deepening political fault lines between the nation's east and west with pivotal regional elections on the horizon.

Michael Kretschmer, state premier of Saxony, sparked controversy over the weekend when he called for an end to the European Union's economic sanctions against Russia after meeting with Russian President Vladimir Putin at an economic forum in St. Petersburg.

"Russia is a strategically important partner," Kretschmer, who is a member of Chancellor Angela Merkel's conservative Christian Democrats (CDU), posted on Twitter. "For a better relationship, we need an end to sanctions."

Rank-and-file politicians from Kretschmer's own party were quick to shoot down his subversion of the German government's official stance on the matter. With Germany's support, the EU recently extended sanctions against Russia until July 31.

"There's no leeway for changes in economic cooperation" as long as Russia's actions in Ukraine remain the same, Annegret Kramp-Karrenbauer, the CDU's leader and Merkel's heir apparent, told German newspaper Bild am Sonntag.

Others took aim at Kretschmer's understanding of the geopolitical situation that precipitated sanctions in the first place.

"Mr. State Premier, do you have a foreign policy adviser?" Wolfgang Ischinger, head of the Munich Security Conference, chimed in. "If yes, fire immediately."

In 2014, Germany and its EU partners, in cooperation with the US and other international power brokers, placed crippling economic sanctions on Russia that limited its access to foreign markets and froze the assets of influential oligarchs.

It was a direct response to Moscow's meddling in the 2014 Ukrainian opposition protests, its subsequent annexation of the Crimea Peninsula and its failure to adhere to the international playbook to end the conflict, known as the Minsk peace agreement.

Bilateral trade between Germany and Russia — nations that had previously tried to extinguish Cold War tensions through strengthened energy deals and cultural exchanges — shrank 40% between 2013 and 2016 as a result, according to government figures.

The slump is particularly evident in the six former East German states, which continue to have strong economic, cultural and ideological ties to Russia, despite the West's detachment from Moscow, Kretschmer said.

"Those now speaking up and pointing a finger need to take note that there's an opinion to this question [of sanctions] in the new federal states that stands on equal footing with others," he told German public broadcaster MDR.

"Those of us in eastern Germany definitely have a different view of Russia than many western Germans," Dietmar Woidke told Bild. The state premier of Brandenburg and member of Merkel's center-left junior coalition partners, the Social Democrats (SPD), said he would support lifting sanctions against Russia as long as it was a European-led effort.

All in all, 58% of Germans back such a detente between Germany and Russia, according to a recent survey contracted by German daily Die Welt. In Mecklenburg-Western Pomerania, the northernmost of East Germany's former communist states, that same figure skyrockets to almost 80%, said Manuela Schwesig, the state's premier and interim leader of the SPD.

"[The situation] is pretty complicated for the economy, and we want to do our part to ease things again," she said at the St. Petersburg forum, without directly calling for sanctions to be lifted.

At the very least, Germany should consider rolling back some sanctions if Moscow attempts to right its wrongs in Ukraine, Michael Harms, director of the German Eastern Business Association (OAOEV), told DW. That would not only halt Russia's economic pivot to China, but also lend weight to the growing concerns of eastern German constituents.

"In my opinion, Kretschmer was completely right in emphasizing how eastern German states are particularly interested in the dismantling of sanctions and a strengthening of the economic relationship," he said. "That Russia is so clearly positioning itself toward China — that wouldn't have happened without the sanctions."

But such arguments are less about economics than they are about politics, Stefan Meister, head of the Southern Caucasus Office at the Heinrich Böll Foundation, told DW.

"It's a kind of populism of eastern German state premiers," he said. "They know this pro-Russia card is popular, and one played by the Alternative for Germany (AfD)."

While the environmentalist Greens showed their strength in western urban enclaves, voters made the far-right AfD the strongest political party in both Brandenburg and Saxony, and the second strongest in Thuringia. All three states vote in regional elections this autumn.

The anti-immigration party has become expressly pro-Russian in recent years, tapping into eastern Germans' feelings of being second-class to western elites and advocating for closer economic ties with Moscow, said Meister.

"They're not well-prepared and always talk about this deep economic intermingling," he said of the eastern German establishment advocating for dismantling Russian sanctions. "And it's much more that they're afraid this could be made as an argument by the AfD."

Such pandering has heftier consequences than election losses, Meister added.

"We would lose any credibility and look weak, especially from a Russian point of view," he said of calls from eastern German premiers to drop sanctions. "And we would lose our own credibility about common values, principles and EU security."

Inside Europe: Life is getting tougher for Russians