The Russian president said that Western societies are rejecting liberal values, as multiculturalism has alienated the "core population." Putin has been accused of promoting populist uprisings in the West. 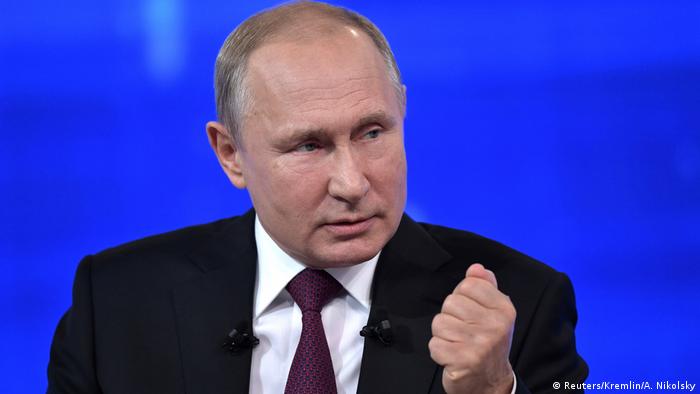 In an interview with the Financial Times newspaper, Russian President Vladimir Putin derided Western liberal values, saying that they are "obsolete" because they have been rejected by the majority of people in Western nations.

Speaking to the newspaper at the Kremlin in Moscow, Putin elaborated on how he thinks immigration policy and multiculturalism are behind the downfall of liberal values.

"Traditional values are more stable and more important for millions of people than this liberal idea, which, in my opinion, is really ceasing to exist," Putin said during the interview printed in Friday's edition of the paper.

Moscow has been accused of undermining elections and supporting populist uprisings and eurosceptic and far-right political parties in Europe and the US.

At the same time, the political landscape in the US, Great Britain, and in EU countries like Italy, Hungary and Poland, has taken a decidedly anti-liberal turn in recent years.

Putin continually denies that Russia plays any role, covertly or overtly, in promoting these shifts in public sentiment. Instead, the Russian president said that liberal governments "have not acted to reassure citizens."

"[Liberals] cannot simply dictate anything to anyone just like they have been attempting to do over the recent decades," he said.

These are "essential and vibrant values" for Europeans, he added. "What I find really obsolete are authoritarianism, personality cults, the rule of oligarchs, even if sometimes they may seem effective."

Read more:Is it time for Germany to revisit its Russia relationship?

During the interview, Putin said that German Chancellor Angela Merkel made a "cardinal mistake" in admitting more than 1 million migrants from the Middle East into Germany.

"The liberal idea presupposes that nothing needs to be done. The migrants can kill, plunder and rape with impunity because their rights as migrants must be protected. What rights are these? Every crime must have its punishment," Putin said in the interview.

This anti-migrant message has also been proffered by Germany's far-right "Alternative für Deutschland" (AfD) party, which has seen electoral success by campaigning on fears of mass migration.

Putin also said he supported US President Donald Trump's harder stance on migration from South and Central America and the tougher border policy with Mexico.

Putin cited the rise of gender diversity and multiculturalism as causing alienating the traditional values of the "core population."

"Let everyone be happy, we have no problem with that," he added. "But this must not be allowed to overshadow the culture, traditions and traditional family values of millions of people."

"Our western partners have admitted that multiculturalism is no longer tenable," he said, while emphasizing that the widespread embrace of gender and sexual diversity from elites in Western society was a mistake. Putin also said that Russian society was not homophobic.

"We have no problem with LGBT persons. God forbid, let them live as they wish," he said. "But some things do appear excessive to us. They claim now that children can play five or six gender roles."

Putin has been at the controls of Russian policy and politics for almost two decades, as he seeks to bring back Russia's status as a world power. In the interview he said the ruling elites in the West had "broken away from the people."

But aggressive foreign policy moves, like the annexation of Crimea in 2014, have come at a heavy cost and the Russian economy is suffering. US and European sanctions have targeted Russian elites and damaged Putin politically.

Although Putin claims liberal values in Western societies are in disarray, the world order led by Western countries still poses the greatest challenge to Putin's goals for Russia.