A group of 73 lawmakers from far-right groups across Europe wants to devolve power back to EU member states, curb immigration and stop the spread of Islam. Italy's League and France's National Rally are at its head. 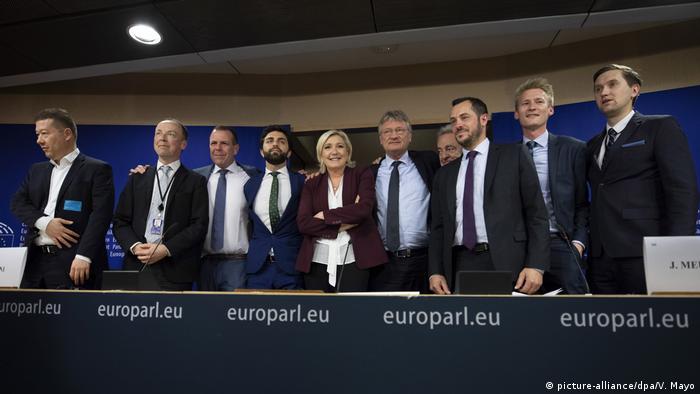 The newly formed Identity and Democracy (ID) group has 73 members of the European Parliament (MEPs) in the 751-seat assembly ahead of its new session in July.

Replacing the Europe of Nations and Freedom group, which had 36 seats in the previous parliament, the new ID group includes:

The 29 MEPs of the UK Brexit Party and Spain's new Vox party have not signed up to join the ID group. Vox preferred to join the European Conservatives and Reformists Group (ECR). Nigel Farage's Brexit Party has not yet made an alliance.

The AfD's co-leader Jörg Meuthen said at the press launch on Thursday in Brussels that the ID group's aims were to prevent the European Union from taking more powers from member states and to block any further harmonization and what he called "the undermining of the nation-state."

However, Meuthen denied the group wanted to destroy the EU: "There are people who say we want to destroy the EU, I want to contradict this." He said the EU needed to be "limited and reformed."

France's Marine Le Pen and Italy's Matteo Salvini, who head the largest parties making up the new ID grouping, had engaged in international talks with other far-right parties ahead of the European elections in an attempt to make it the third-largest group in the assembly. In total, 10% of MEPs elected in the May elections represent far-right parties.

But they failed to resolve differences on policies with a number of their far-right colleagues, and ID has become only the fifth-largest grouping in the assembly, coming in just behind the Greens.

The ID group will be led by Italian Marco Zanni of Salvini's League party. He denied the failure to attract all the far-right parties was a defeat. "We were unable to create a united group for a number of reasons with the Brexit Party," he said at the ID launch. "It's not a defeat, it's an open relationship. We are open if they want to cooperate."

One of the main differences among the far-right groups in Europe appears to be their attitude towards Russia. Salvini's League and Le Pen's National Rally enjoy close ties to Moscow while Scandinavian and Baltic parties see Russia as more of a threat.

The AfD and other euroskeptic parties have formed a bloc ahead of the European Parliament elections. Various anti-immigrant youth organizations recently gathered in Rome, giving a sense of what might be to come. (05.04.2019)

After lampooning Germany's traditional parties in the EU elections, the satirical party Die Partei is sending two representatives to Brussels. But when things get serious, where do the jokes end and the politics start? (07.06.2019)