Germany′s ′Die Partei′ takes satire to the European Parliament | Germany | News and in-depth reporting from Berlin and beyond | DW | 07.06.2019

After lampooning Germany's traditional parties in the EU elections, the satirical party Die Partei is sending two representatives to Brussels. But when things get serious, where do the jokes end and the politics start? 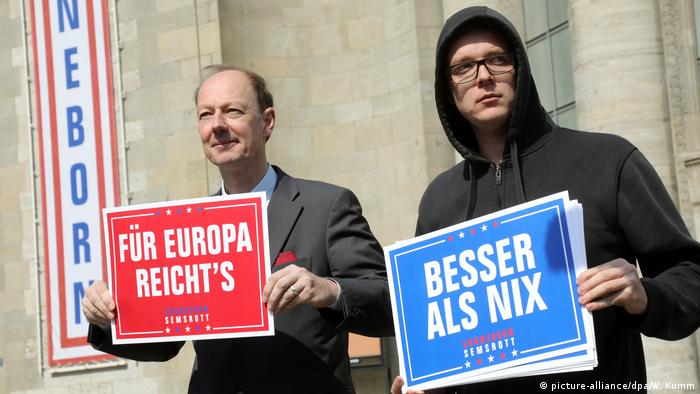 Founded in 2004 by editors of the long-running black comic satirical magazine Titanic, Die Partei saw its biggest success yet in May's elections for the European Parliament, winning nearly 900,000 votes and securing two seats.

After running their election campaign off the back of placard slogans that widely mocked the political status quo, Die Partei walked away with 2.4% of the German vote in the EU elections — more than tripling their vote share in comparison to 2014. 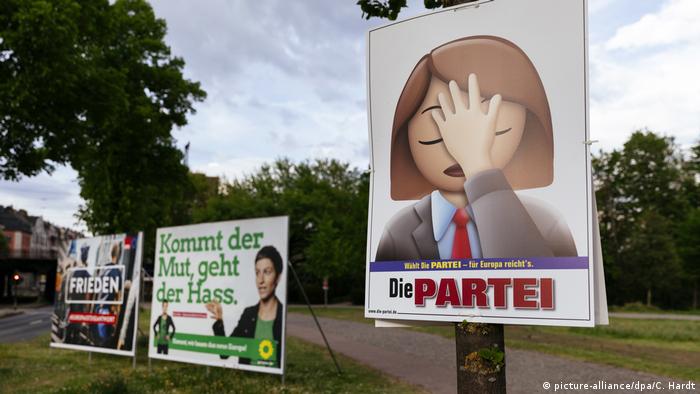 Die Partei candidate Martin Sonneborn (top photo, left) first took his seat as a member of the European Parliament (MEP) for Die Partei in 2014. Now, five years later, he will be joined for the next legislative term by cabaret artist Nico Semsrott (top photo, right), who is known in Germany for his appearance on public broadcaster ZDF's satirical Heute Show.

"Die Partei's first legislative period in Brussels "came as a bit of a surprise," Sonneborn told DW. "But, after five years, we know how the European Parliament works. Now we can use that knowledge and considerably more manpower, to annoy the conservatives."

The satirists were particularly popular among the young. They pulled in 9% of ballots from first-time voters, putting them ahead of the once mainstay center-left Social Democrats (SPD), who currently co-govern Germany with Angela Merkel's conservatives, and the business-friendly Free Democrats (FDP) in this voter category.

According to Thomas Poguntke, a political scientist at Dusseldorf's Heinrich Heine University, it was Die Partei's established presence on social media that led to the party's EU election success.

Die Partei "also manages to strike a certain chord with its somewhat skewed humor, and that appeals to a lot of young voters who have the feeling that politics is full of rituals, and they can't take it seriously anymore," Poguntke told DW. He added that in comparison, the election campaigns of the catch-all parties, such as the SPD and Merkel's conservative Christian Democrats, were relatively "boring and arbitrary."

In an interview with DW, Sonneborn also expressed humorous thanks to Germany’s political parties for their "cooperation" in aiding Die Partei's success.

"I'd like to express my thanks to all the parties whose policies are driving voters to us, so we didn't have to do much of anything," he jibed.

In taking up the responsibility of two MEP posts, Sonneborn and Semsrott now face the task of balancing politics and parody.

In the run-up to the EU elections, Die Partei veered from its usual satirical placards when it teamed up with the rescue non-profit Sea-Watch to highlight the thousands of migrant deaths in the Mediterranean. Instead of presenting the party's demands and candidates, the video showed a boy drowning in the sea and concludes with the appeal: "Help us to end the deaths."

Public broadcaster ZDF pulled the plug on the advert, arguing that viewers would not have recognized the advert as part of an election campaign. A new version was later aired with the addition of the text: "Vote 'Die Partei' — because it pays attention to the important issues."

For the upcoming EU legislative session, which opens in July, Semsrott has decided to join the environmentally friendly Green party parliamentary group — or as he preferred to describe it on Twitter, "The Green parliamentary group has joined [him]." The move indicates a shift in the party's political pragmatism to get more done.

His move could also be advantageous to the Greens faction, as the group will likely become bigger than the body's far-right grouping and therefore be granted more time to speak in parliament.

Still yet to decide whether he will join a parliamentary group or remain an independent MEP, Sonneborn said he and Semsrott will aim to initiate a bill that successfully passes through parliament every year.

But according to Semsrott and Sonneborn, Die Partei isn't about to lose its sense of humor — even when it comes to serious topics.

"[Politics] is only about serious topics," Semsrott said. "I'm a serious politician. I just do things satirically so that the topics are interesting."

Sonneborn, too, insists that the Die Partei remains the "most satirical" of Germany's political parties. "Except for the Free Democrats," he quipped. "They're a joke party through and through."

EU: 'A wonder of humankind'

Back home in Germany, Die Partei cites some 38,000 party members, making it about the same size as the far-right Alternative for Germany (AfD) party. But electorally, Die Partei's numbers have never translated into any parliament seats — neither at state or federal level, where it would need to get at least 5% of votes to get a seat in Berlin. And the party's fortunes are not about to change, says political scientist Poguntke.

"Die Partei could do well in some local council elections, but I don't see them suddenly being the big challenger in Germany's 2021 federal elections," Poguntke told DW. "For some voters, the EU elections aren't 'prime elections,' so it's easier for them to vote less seriously."

For now, however, Semsrott is content to settle into his role as Die Partei MEP alongside Sonneborn.

"The European Union is a wonder of humankind," Semsrott told DW. "The fact that 28 countries have managed to agree, 'Yep, we'll give up a bit of power' and then vote together ... the only transnational, democratic parliament in the world. How crazy is that then? That's some kind of wonder. And I'm looking forward to being part of it."

German parody party Die Partei scored a palpable hit against the populist right-wing AfD this week. But who exactly are die Partei – and what purpose does satire serve in election season? (05.09.2017)

Germany's satirical political party Die Partei and the Bundestag battled it out over a hefty fine leveled at the satirists last year. A fundraiser called "buy money" did not break party finance laws, the court ruled. (21.09.2017)