Things to know about Germany′s satirical party Die Partei | Germany | News and in-depth reporting from Berlin and beyond | DW | 05.09.2017

German parody party Die Partei scored a palpable hit against the populist right-wing AfD this week. But who exactly are die Partei – and what purpose does satire serve in election season? 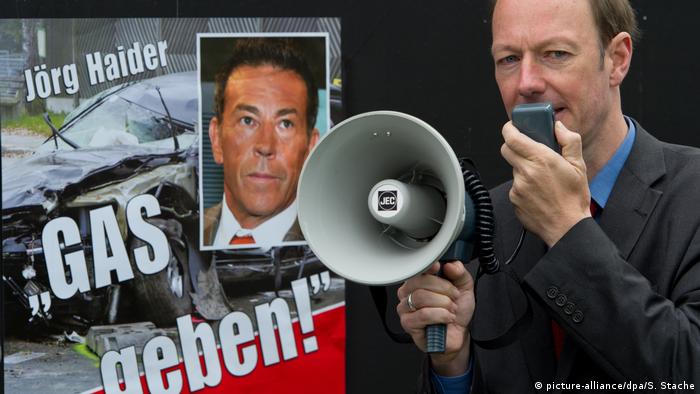 Political satire may not always be funny, and in Germany it's being taken more and more seriously. The Germany satirical party – called simply Die Partei (The Party) – demonstrated what satire can do this week with its Facebook prank on the right-wing Alternative for Germany (AfD).

By taking over 31 private Facebook groups used by supporters of the nationalist party, Die Partei did not just content itself with making fun of its racist or homophobic tendencies. Since many of the groups were originally administered by social media bots, the stunt also exposed the insidious power that the automatic distribution of political messages can have on election campaigns – and how the populist right has made far more use of this tactic than the mainstream parties.

Not only that, the move had a palpable effect on the election campaign – by effectively shutting down one of the AfD's communication streams just a couple of weeks before the election. Such methods are out of bounds to normal political parties, but die Partei is (or can be at its best) a focal point for active protest. 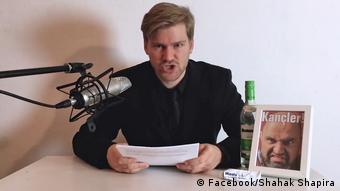 The Party is always right

Die Partei was founded in 2004 by editors of the long-running black comic satirical magazine Titanic, initially as a parody of Germany's political parties.

The name also serves as a reference to the Socialist Unity Party (SED) that ruled East Germany, which was routinely called simply "the Party" in the communist state, and whose anthem "The Party, The Party, it is always right" has been adopted by Die Partei in their own ads.

As for its campaign goals, Die Partei's election manifesto is replete with meaningless political platitudes pushed to the edge of absurdity: "Die Partei supports the implementation of all-encompassing, universal, total justice, at least twice as much justice as the SPD (Social Democratic Party). Any complaints about supposed injustices will be suppressed with the utmost force."

Other proposals taunt authoritarian governments elsewhere. Die Partei's policy on Turkish President Recep Tayyip Erdogan, for instance, reads: "The crazy man of the Bosphorous, Erdogan, will be tempted to Germany, arrested, incarcerated, and then exchanged for [imprisoned German-Turkish journalist] Deniz Yücel. Should Yücel already be in freedom, the final point will not apply. NATO occupation troops in Turkey will be reinforced."

Elsewhere in the manifesto, Titanic's black humor is also on show: "A limit on the number of refugees will be redefined annually: Germany must not take in more refugees than the Mediterranean." 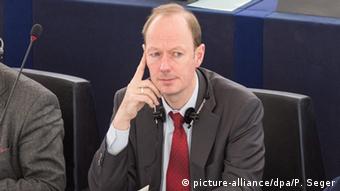 Sonneborn has made some notable interventions in the European Parliament

Electorally, though, Die Partei's numbers have never translated into any state parliament seats – let alone any Bundestag seats. And yet, in the European Parliament election of May 2014, it landed a coup by winning a seat, thanks in part to a joint lawsuit filed at the German Constitutional Court along with other minnow parties against the 3 percent hurdle to representation.

With the law on his side, Die Partei's leader and co-founder Martin Sonneborn became its first European Parliament member – with 0.63 percent of the German vote. Sonneborn, something of a TV celebrity in Germany because of his appearances on a public broadcaster's political satire show, currently sits on the culture and education committee, and occasionally makes proposals in parliament that only appear to be half-jokes. In September 2016, he made a speech demanding that Ireland be excluded from the EU for giving Apple a 13 billion euro tax rebate.

The party hasn't missed the opportunities presented by this election campaign, either. To bait the anti-Turkish sentiment currently circulating in Germany thanks to the political rancor with Erdogan, Die Partei selected Istanbul-born German-Turkish comedian Serdar Somuncu as their chancellor candidate. Somuncu's comedy acts have previously involved reading from Hitler's Mein Kampf and impersonating a hate preacher.

Naturally, Die Partei has also attracted its share of "have they gone too far?" stories in the run-up to the election. The most notable of these was sparked some campaign posters that read "a Nazi could be hanging here," which were fixed to lamp-posts around Berlin, Saxony-Anhalt and Baden-Württemberg.

Calling for an act of violence is an offense in Germany, though die Partei's spokesman Steffen Retzlaff was unimpressed by the outrage: "One or two people might be a little overwhelmed by the charm or ambiguity of our posters," he said.

In fact, this poster also had a point to make: It was a parody of a poster displayed last year by the far-right minnow party Die Rechte. That one read, "We don't just hang posters" - and was placed outside a refugee home.

She’s young, she’s unflappable and she’s perhaps the savviest AfD politician when it comes to the media. DW looks at how the right-wing party’s co-candidate, Alice Weidel, has flummoxed Germany. (04.09.2017)

Candidates from the Left party, the Greens, the FDP, the CSU and the AfD convened for a somewhat chaotic TV debate. The most interesting moments came when the politicians were allowed to ask one another questions. (04.09.2017)