The satirical party Die Partei has taken over 31 private Facebook groups followed by supporters of the populist Alternative for Germany. They have now ordered the right-wingers "to face Mecca when attacking Islam." 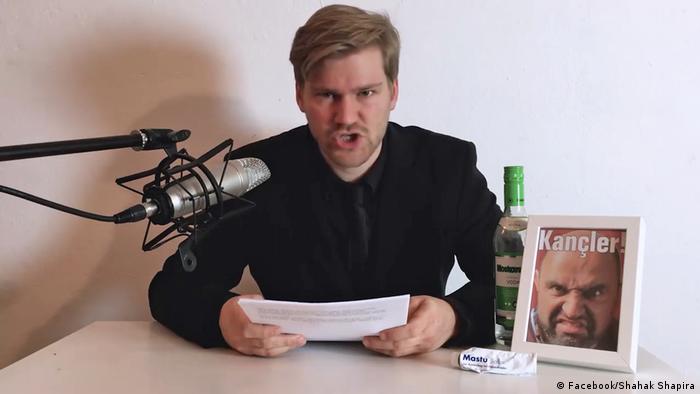 The right-wing populist Alternative for Germany (AfD) has been humiliated on Facebook in the run-up to this month's national election thanks to a prank pulled by the satirical political party Die Partei (The Party).

The Party's satirists say they spent 11 months using fake accounts to infiltrate various private AfD Facebook groups with names like "My Fatherland" and "The Truth about the Antifa." The pranksters worked their way up to admin status before kicking the current admins out, making the content public, and changing the names of the groups, which had a combined membership of over 180,000 people.

Now the group "The Truth about the Antifa" is called "I <3 Antifa", "Love your Homeland" has become "Love your Hummus" and "Sharia - more and more in Germany?" has turned into "Shakira - when is she coming back to Germany?"

On Sunday, Die Partei posted a video entitled "The Coup" to all the groups' pages, in which a satirist explained to the followers that their groups were now being led by the political party.

Shahak Shapira ("Don't worry, it's an old Prussian name," the Israeli-born comedian deadpans) told the followers that while the groups were often proliferated and administered by online bots, "you are now being fooled by real people."

He also said that he was imposing new rules on the groups, including that "hate speech towards Islam is now to be done facing Mecca," that all groups must have a "minimum refugee quota" of 18 percent, and that Israeli secret service Mossad would from now on have the right to activate their webcams at any time.

"That means me. I am from Mossad," said Shapira, possibly joking.

Shapira has pulled a few outrageous stunts before. Most famously, he stenciled text from racist tweets outside the German offices of Twitter in Hamburg to draw attention to the social media site's failure to clamp down on racist comments. He also created the #Yolocaust project, which showed visitors to Berlin's Holocaust memorial engaging in questionable behavior and sharing their photos via social media. Shapira took, for example, a photo of a person doing yoga poses on the memorial and superimposed it on a background photo of Holocaust victims' corpses.

AfD spokesman Christian Lüth dismissed the prank as a "stupid joke that is supposed to annoy the voters and us." "Apparently this party has no interest in doing its own, serious election campaign, but would rather occupy itself with damaging other competitors in an illegal way," he said in a statement to DW, before adding that the groups "had not shared any particularly secret content."

Other AfD politicians have also made vague threats of legal action, with Thomas Rudy of the AfD's Thuringia branch talking of "illegal machinations."

Not just a joke

Speaking to the Hamburger Abendblatt newspaper, Shapira said much about the prank was "not that funny if you consider the dimensions of it," not least because some fairly high members of the AfD were active in the groups.

He added that the whole project had taught him a lesson in bots and confirmation bias clouds on social media. "I was added to the groups with a fake profile and saw how you get dragged into a whirlpool of hate and fake news through friend requests from apparent bot accounts from the AfD," he said. "A digital election campaign is being fought that only serves to manipulate people."

Shapira also said he hoped Die Partei's operation would "set something off" in a few of the group members. "Opinions and attitudes can't be changed, but maybe it will get people to start thinking about things," he said.

Shapira's experience chimes in with research published by the FAZ newspaper in February, which found that the AfD was making much more use of social media bots than other German parties. These programmed algorithms post and share content on Twitter and Facebook and add friends to groups automatically. Bots allow political messages to be distributed much more quickly and can create the illusion that parties or politicians have many more followers than they really do.

One of the AfD's leading election candidates, Alice Weidel, has previously denied that her party would use bots during the election campaign. She told Reuters news agency in February that though the party would use "analysis or help programs that make day-to-day work easier," the AfD would draw the line at "social bots that post on other people's pages automatically in the name of the AfD."

But FAZ research in February and Shapira's actions suggest that AfD memes and articles are being shared from automated accounts - if not by the party itself, then by its supporters. On Facebook, such bots are often recognizable by certain characteristics: they post frequently, share content without commenting on it, and don't have photos of actual people in their profile pictures. Bots also often share each other's posts.

Shapira claims that many of the groups taken over by Die Partei were administered by bots - something that the FAZ research from February corroborated.