Potential partners for Angela Merkel do battle in German election TV debate | Germany| News and in-depth reporting from Berlin and beyond | DW | 04.09.2017

Candidates from the Left party, the Greens, the FDP, the CSU and the AfD convened for a somewhat chaotic TV debate. The most interesting moments came when the politicians were allowed to ask one another questions. 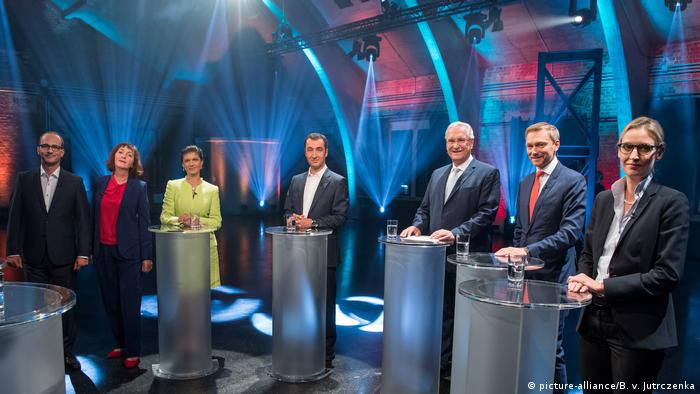 After the debate between the conservative and Social Democratic candidates that generated few highlights on Sunday, it was the smaller parties' turn to duke it out on German public TV on Monday.

The five participants covered the entire range of German politics: the anti-immigration right-wing populist Alternative for Germany (AfD); the Bavarian conservative party, CSU, the "little sister" of Chancellor Angela Merkel's CDU; the free-market- and personal civil-liberties-oriented Free Democrats (FDP); the Greens; and the Left Party, the successor to the Socialist Unity Party in the former communist East Germany.

The potential for disagreement was far greater than between Merkel and her SPD challenger Martin Schulz, so it didn't take long for a few sparks to fly in what was billed as the "battle of five." 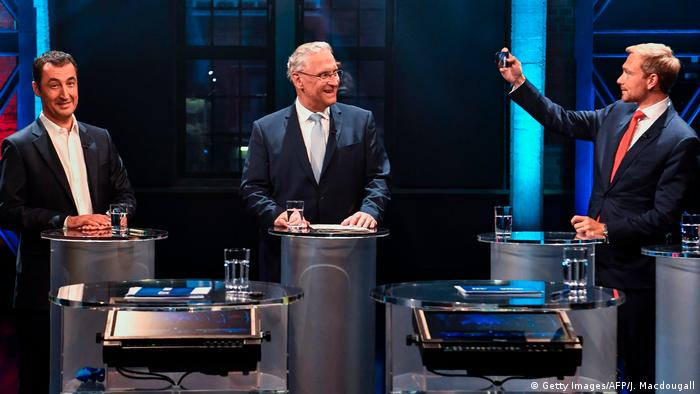 The Left Party's Sahra Wagenknecht, for example, immediately attacked the CSU and the FDP for their support of privatization. But all of the party representatives - with the exception of the CSU's Joachim Herrmann - went after Merkel's grand coalition on issues ranging from pensions to digitalization to data privacy to measures to combat radical Islamists in Germany.

The best of enemies?

Although all five participants were aiming to win votes, the stakes were very different. The CSU only stands in Bavaria and has never broken with the CDU, so for them the pressure was off. The AfD, some of whose members have been repeatedly accused of racism and pro-Nazi sympathies, are considered toxic by all other German parties. And the CDU-CSU has ruled out any coalition with the Left, effectively shutting them out of a share of power, unless Schulz and the SPD stage a miracle comeback in the polls.

So eyes were very much on the two potential kingmakers whom the conservatives could well court for a coalition: the FDP and the Greens. An alliance of those two parties with the CDU-CSU would almost certainly command a parliamentary majority after September, but it would also require the Greens and the "Liberals,” as the FDP are known, to overcome their pronounced mutual antipathy.

Whether it was strategy or not, FDP chairman Christian Lindner pointedly agreed with Green co-leader Cem Özdemir that wages for traditional female occupations like nurses and educators needed to be raised. Lindner also used the informal second-person form of address in addressing a direct question to the Green leader.

The two exchanged some testy words over Russia's occupation of Crimea, but for his part, Özdemir seemed more concerned with criticizing the CSU and the right- and left-wing extremes.

"I can't hear the anti-EU excuses any more, either from the Left or the AfD, that every time national policy fails it's Brussels' fault," Özdemir said in his most heated moment. 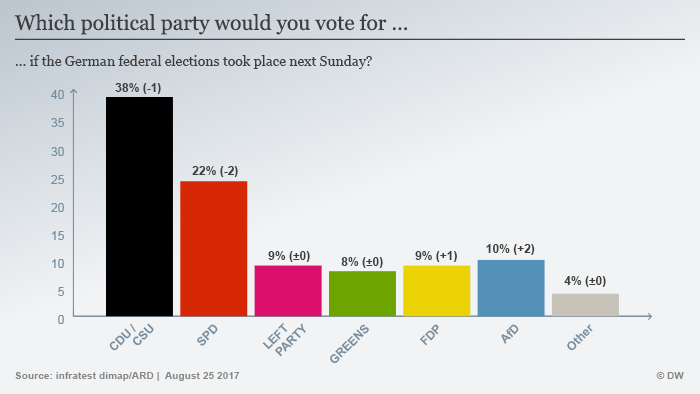 The small parties are running neck and neck in opinion polls

For the Linke and the AfD, both of which are also hovering around the ten percent mark in opinion polls, the goal is to eat up as much of the vote as possible, making it difficult for the more centrist parties to form a coalition.

Should it come to another edition of the grand coalition, the party among the Left, the Greens, the FDP and the AfD that garnered the most votes would lead the parliamentary opposition. That would be a feather in the cap particularly for the AfD, which has only existed since 2013.

The AfD's Alice Weidel was at pains to claim her party was the only one that criticized the European Union's policy of zero percent prime rate interest. That didn't sit well with the Left.

"I don't know if the AfD took over the criticism of the EU from us, but we were advancing it before there even was such a thing as the AfD,” Wagenknecht said.

Weidel responded by asking Wagenknecht whether her party truly believed in a world without national borders. Wagenknecht then raised the stakes by asking Weidel whether she felt comfortable in a party full of "half-Nazis.” 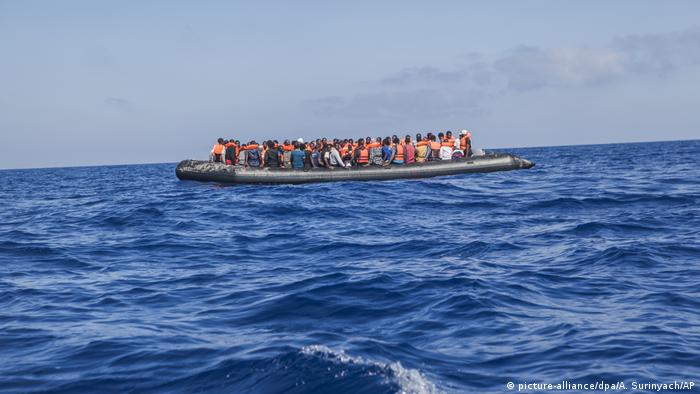 Amidst criticism that the Merkel-Schulz debate focused too much on migrants, the moderators initially concentrated on social welfare issues. But there was no avoiding the topic of migrants and asylum seekers.

Here differences between the FDP and the Greens emerged, with Lindner saying that rejected asylum seekers needed to be deported more quickly and criticizing the Greens for opposing deportations to Northern Africa.

Not surprisingly Weidel took the hardest line, proposing that German asylum law needed to be rewritten to achieve "negative immigration.”

Özdemir argued that the "wrong people” were being deported, while dangerous individuals like the Berlin Christmas market attacker Anis Amri escaped effective supervision.

Whether any minds were changed as the five representatives challenged and interrupted one another over the course of 75 minutes is an open question. But the "battle of five" did show that there is some possibility for shifting alliances in German politics, but that will depend on on the German electorate, when it chooses the country's next parliament on September 24.