Germany's satirical political party Die Partei and the Bundestag battled it out over a hefty fine leveled at the satirists last year. A fundraiser called "buy money" did not break party finance laws, the court ruled. 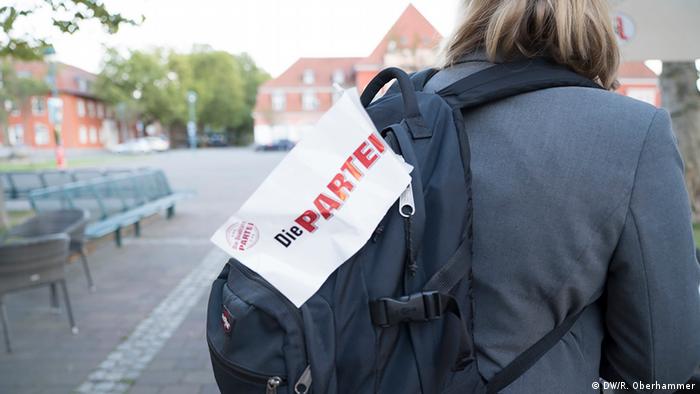 Selling €100 and two postcards for €105 as way of raising both a small amount of money — and substantial public funding — did not break German political party financing law, a Berlin administrative court ruled on Thursday.

Satirical party Die Partei (the Party) will not have to refund thousands of euros in grants from the Bundestag or be subject to penalty fines, the court added.

Last November, Sonneborn said if forced to pay the fine, it would "ruin" Die Partei.

The Bundestag announced last year that it was seeking €72,000 ($85,675) in grants be returned as well as a €384,000 fine be paid over a fundraising scheme launched in 2014 that the parliament alleged broke party finance laws.

In their usual vein of provocative campaigns meant to poke fun at Germany's other political parties, Die Partei held a fundraising program at the end of 2014 appropriately titled "Buy money." For €105, its supporters received €100 cash back along with two postcards. They made some 200,000 euros from the campaign, and soon thereafter garnered enough votes nationwide to be eligible for increased federal funding and garnered Sonneborn a seat in the European Parliament.

Founded in 2004 by Sonneborn and some fellow editors at the satirical magazine Titanic, Die Partei has accumulated a significant following, now boasting some 24,000 party members — just shy of the 25,000 in the far-right Alternative for Germany (AfD), which is polling in third place behind Germany's two major parties just day ahead of the September 24 general election.

This is the second time in two weeks that Die Partei has made headlines. Earlier in September, they became infamous for launching a major prank on the AfD — by taking over 31 of its related Facebook pages and mocking the far-right party's racist and homophobic messages.

But Die Partei may have more in common with the AfD than it's willing to admit. Germany's far-right nationalists have also come under fire for its fundraising schemes, notably a questionable campaign of selling gold in order to keep afloat.

Germany's new parliament has met for its first session since September's election. DW's Thomas Sparrow met two first-time MPs to hear what their hopes and expectations for the Bundestag's 20th legislative period are.

The German election has resulted in a parliament that will be younger, more female and more diverse than before. DW's Kathrin Wesolowski met with Germany's first two transgender parliamentarians, who are looking forward to working for more equality.