In Germany and Europe people from across all parts of society are losing their trust in politics and turning towards populism ahead of EU elections. They must be won back — for democracy is at stake, writes Jens Thurau. 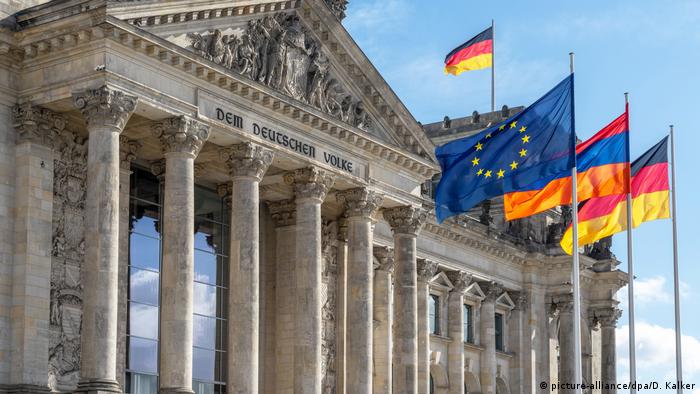 Does it really make a difference anymore when German politicians keep repeating statements such as "Germany is better off than it has ever been before?" When they point to the fact that Germany is blessed with almost full employment? Does it help that Germany's current generation of pensioners is better provided for than hardly any previous one? That young people have the kind of perspectives previous generations could only dream of?

No, it doesn't help much.

For Germany is bewildered and looking for guidance — not only at the fringes, but increasingly in the center, too. A study conducted by the left-leaning Friedrich Ebert Foundation showed that negative perception of asylum-seekers has now reached record levels among Germans, reaching some 54 percent. It only seems to be a contradiction that other groups, such as the homeless, are increasingly accepted. After all, it's refugees who bear the brunt of a different, deeply ingrained discomfort. More than half of those polled believe that clandestine organizations chart the course of politics. One third view politicians as mere puppets. If conspiracy theories reach those dimensions, there must be something fundamentally wrong.

Perhaps it could be explained as follows: For a number of years now, German trains run late or are cancelled. The reason, whether openly acknowledged or not, is a lack of funds.

In German cities, a housing shortage has reached gigantic dimensions. In response, politicians only shrug their shoulders — "Let's just build more homes." But the problem here is the same: lack of funds.

And the list goes on. It also includes derelict schools and understaffed administrative bodies. Sure, it's all tolerable. On an international level Germany is still doing well. People, however, have a good memory. They remember that ten years ago, during the financial crisis, all of the sudden billions of euros were supplied practically overnight in order to bail out the banks.

If we look across our borders, the situation is similar. The Bertelsmann Foundation asked people in 12 EU countries about their political views ahead of the European Parliament election at the end of May. The result: The largest political grouping that has already decided who it will vote for is that of right-wing populists and right-wing extremists. They make up around ten percent of those polled. The vast majority, however, thus far only knows who they will not vote for under any circumstances. Only a minority still owns up to voting for one of those political parties that are usually labeled "traditional" or established" when there are other options.

In short: The messages of politicians, media, labor unions, churches, trade associations don't come through anymore. They don't reach the fringes, and they don't even reach the center of society.

And now — what's the way forward? There's a glimmer of hope in the fact that, in both surveys, people still speak out in favor of democracy and even of good relations between European nations. But they obviously don't like how things are going right now. For Germany, this means coming down from lofty levels. German politicians must do their homework, listen, refrain from making empty promises, and instead be honest about their own limits.

That's not easily done in an age when standing out as an individual is the be-all and end-all, in an age of extreme acceleration both in the private sphere and in the workplace. But there aren't that many alternatives. Keeping calm is the order of the day when screaming right-wing populists hog the headlines. And working hard at the grassroots level, in municipalities, at public offices, is essential in order to win back people's trust.

At the end of the day — and this is confirmed by the Bertelsmann study — it's all about representation. Those who have been feeling for a long time that they're not a part of society are likely to harbor crude views. However, without the tacit agreement that, if possible, all people must be members of society, no democracy can survive. Dictatorships can, but not liberal societies.

So let's get to work. Europe is not yet lost.

German president warns of nationalism in a globalized world

Frank-Walter Steinmeier is convinced that reverting back to nationalism is not the answer for tomorrow's world. Europe needs to be strong and united, he urged. (22.03.2019)

Ahead of the European elections in May, the EU is in the midst of its most radical crisis ever, warns Bulgarian political scientist Ivan Krastev. He says the bloc needs more courage and less German risk aversion. (24.04.2019)

Macron wants EU to stand firm in the defence of democracy

VW pays millions in 'Dieselgate' settlement in Britain 9h ago