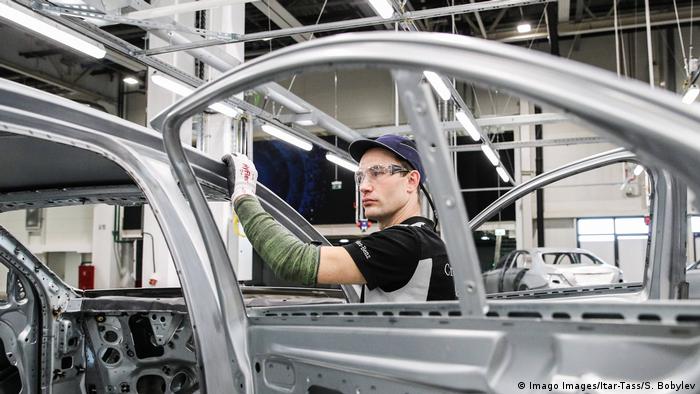 More than 140 firms that participated in a recent survey reported more than €1.1 billion ($1.25 billion) in losses since the sanctions came into effect five years ago, the group said.

"The total figure amounts to several billion euros when these numbers are projected onto the entire German economy and the more than 4,500 companies operating in Russia," AHK CEO Matthias Schepp added.

The United States and the European Union imposed sanctions after Russia annexed the Crimean peninsula from Ukraine in early 2014. EU sanctions have by contrast had a relatively limited impact on German companies active in Russia, Schepp said.

US sanctions leave European firms in a bind

AHK President Rainer Seele accused the United States of using the measures to pursue its own economic interests at the expense of Germany's "Mittelstand," a collective term for the country's famed small- and medium-sized firms.

"These sanctions are counterproductive, fail to serve their political purpose, drive a wedge between America and Europe and harm everyone in the long term," he said. The EU should, he added, get started with ending its own sanctions against Russia.

The bloc voted to continue the measures at a summit last week. Germany is one of the EU regime's staunchest supporters.

AHK: Merkel needs to step in

The AHK said 87% of its members wanted German Chancellor Angela Merkel to pursue better relations with Russia by attending more economic events in the country.

"Germany should not take the butter from the bread of its partners, no matter whether they are in sanctioned countries," Schepp said. "German policy can send a clear signal without violating the framework of the sanctions."

German Economy Minister Peter Altmaier signed a pledge to improve economic ties with Russia at the country's largest economic summit in St. Petersburg earlier this month. He was the first senior German minister to take part in a conference since the annexation of Crimea in 2014.

Schepp said most AHK members were still doing good business in Russia, with "companies expecting sales and profits to increase" in the near future. Around 39% of companies want to invest more in Russia, he added.

Despite its support for EU sanctions, Germany has been criticized by the US and Ukraine for pursuing a gas pipeline deal known as Nord Stream 2 that would deliver Russian gas directly to northeastern Germany via the Baltic Sea.

The Ukrainian government says the project undermines EU sanctions because it would bypass Ukraine, which serves as a transit country for most of the Russian gas delivered to central Europe.