German politician in hot water over meeting with Nicolas Maduro

Andrej Hunko said he wanted to express his "solidarity" in the face of economic sanctions and the threat of war. But fellow lawmakers slammed the move as "embarrassing" and "a slap in the face" to struggling Venezuelans. 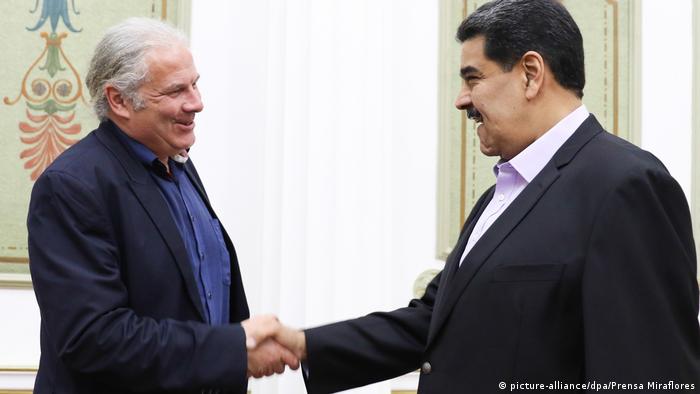 The meeting was part of Hunko's 11-day trip to Venezuela, where he also met with self-declared President Juan Guaido.

A member of the Left party, Hunko is the first German politician to visit the country since the South American nation has been consumed by political, economic and humanitarian crises.

Relations between Berlin and Caracas have soured since Germany joined 50 other countries in recognizing Juan Guaido as Venezuela's interim president. Since then, Maduro's government has denounced Berlin's support for Guaido and expelled Germany's ambassador from the country.

Against sanctions and war

In a statement posted on his Twitter and Facebook pages, Hunko said he expressed his "solidarity with the Venezuelan people against economic sanctions and threats of war," to Maduro during the meeting.

Maduro, in turn, denounced the "illegality of the sanctions and seizures of Venezuelan assets by international banks under pressure from the US," which the Venezuelan president claimed is making the situation worse.

Hunko confirmed his meeting with Guaido and other opposition figures. The German politician said he expressed his "conviction that a solution to the crisis can only be peaceful and based on dialogue."

But Hunko found "mixed signals" for a peaceful resolution. He said Maduro had assured him he was in favor of dialogue, but that talks were pointless if they would fall under US pressure, as he claimed they did in November and December.

Social Democrat (SPD) lawmaker Nils Schmid denounced the meeting, saying it was "embarrassing that the Left party still supported a ruler who had destroyed democracy in Venezuela and plunged it into economic ruin."

The deputy chairman of the CDU/CSU in parliament, Johann Wadepuhl, said Hunko's actions were "scandalous."

"With this meeting, Hunko slaps the oppressed people of Venezuela in the face and he makes himself into Maduro's henchman," Wadepuhl told dpa.

Omid Nouripour, a lawmaker for the Green party, complained that Hunko had allowed himself be "used as propaganda" for the Venezuelan president.

"Maduro is no leftist president, he is a bad kleptocrat that has ruined his country and his people," Nouripour said.

So far, Left party politicians have been quiet about Hunko's Venezuela meeting with Maduro. But lawmaker and foreign policy spokesman Stefan Liebich said that he welcomed his colleague's intention to talk to both sides of the political conflict.

"In this respect, I have no criticism of it," Liebich said, adding that he was "curious to see what he (Hunko) will tell us."

Venezuela's political crisis has been deadlocked for months, as Guaido's push to oust Maduro, by pressuring the country's army, has proved unsuccessful.

Meanwhile, the country is facing the worst economic and humanitarian crises in its modern history, with inflation expected to soar to 10 million percent this year, crippling shortages of food and a near-collapsed health care system, coupled with chronic electricity blackouts and water shortages.

Two dozen tons of medical supplies arrived in Caracas, after Nicolas Maduro granted the Red Cross permission to deliver the aid. A recent report found the country's health system to be in "utter collapse." (17.04.2019)

Venezuela's regional and local elections saw the "arbitrary disqualification" of opposition candidates and "disproportionate" weight of the state, the EU electoral mission said.