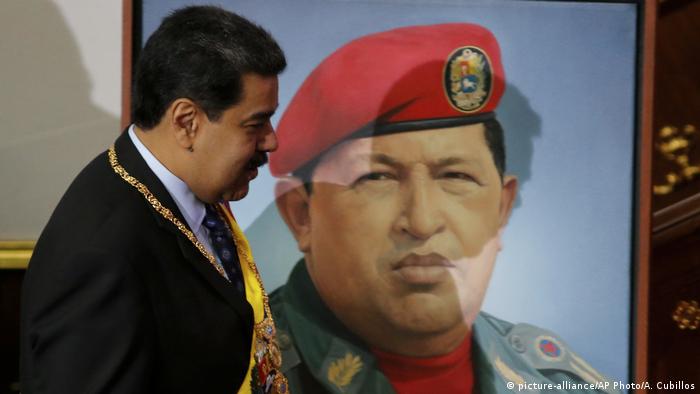 Government spokeswoman Martina Fietz said on Twitter that Berlin was ready to recognize opposition leader Juan Guaido as acting president unless a new vote is called in the next week.

"The people of Venezuela must be able to decide their future in freedom and security. If elections are not announced within 8 days, we are ready to recognize Juan Guaido as interim president, who will initiate the political process. [We're] working closely with European partners," Fietz wrote.

Sanchez's statement said: "We do not seek to put or remove governments, we want democracy and free elections in Venezuela."

That position was echoed by EU foreign policy chief Federica Mogherini, who said in a statement that the European bloc would "take further actions, including on the issue of recognition of the country's leadership," if the Venezuelan government failed to call elections in the coming days.

"We reaffirm our deep belief that a peaceful and inclusive democratic solution is the only sustainable way out of the current political impasse," the statement said.

The coordinated announcements are the most explicit yet from EU states, after the 28-member bloc struggled to draft a joint statement laying out its take on the crisis.

Germany and Spain had on Friday called for fresh elections but without giving a deadline.

Speaking at a special session of the UN Security Council on Saturday, Venezuela's foreign minister insisted that Maduro remained the legitimate president despite international pressure.

"Nobody is going to give us deadlines or tell us if there are elections or not," Foreign Minister Jorge Arreaza said. "How is it that you can issue an ultimatum to a sovereign government?"

Maduro, who came to power 2013 as the designated heir to the late and hugely popular Hugo Chavez, has been mired in crisis since the Venezuelan economy tanked amid falling oil prices.

Populist social policies, introduced by his predecessor, have become economic liabilities that have resulted in hyperinflation, high unemployment, and shortages of basic goods.

Maduro won a second term in office last May in a vote the opposition and neighboring countries deemed was fraudulent, which has intensified pressure on him to step down. Until now, he has retained the loyalty of the powerful military.

Guaido, the 35-year-old head of the National Assembly, proclaimed himself acting president during massive street rallies this week.

The United States, Canada, Brazil, Argentina and other countries have already endorsed Guaido in repudiation of Maduro.

Since his self-proclamation as interim leader, Guaido has rejected an offer of talks with Maduro and called for a "major demonstration."

Russia, US confronted at UN

Meanwhile, Russia accused the US of plotting a "coup" against Maduro at the UN. Moscow also attempted, unsuccessfully, to block a UN Security Council meeting on the crisis.

US Secretary of State Mike Pompeo also addressed the crisis on Saturday, focusing on Maduro's order to US embassy staff to leave the country.

"Let me be 100 percent clear — President Trump and I fully expect that our diplomats will continue to receive protections provided under the Vienna Convention," Pompeo said as the Maduro-set deadline was set to expire.

"Do not test the United States on our resolve to protect our people," he added.

"Either you stand with the forces of freedom, or you're in league with Maduro and his mayhem," he said.

Despite declaring himself the interim president, Juan Guaido is not a household name in Venezuela's opposition, but he has been at the forefront of one of the boldest moves against Nicolas Maduro. How did he get there? (24.01.2019)