Venezuela explained: Who backs Maduro, who backs Guaido? | World| Breaking news and perspectives from around the globe | DW | 25.01.2019

Nicolas Maduro? Juan Guaido? Neither? DW takes a look at the reasons why some countries are backing Venezuela's embattled president, others his upstart nemesis and some are somewhere in the middle. 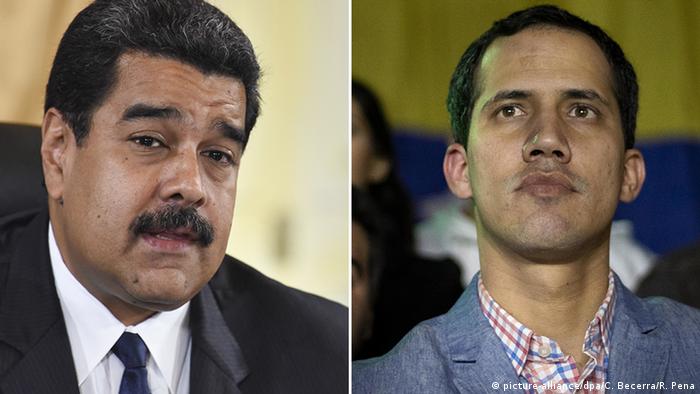 The international community has been quarreling over who has the authority to lead crisis-ridden Venezuela since opposition leader Juan Guaido surprised President Nicolas Maduro by declaring himself president.

Within minutes of Guaido's declaration, the United States said it would recognize him as Venezuela's president. Washington has opposed Maduro's reign since he took over from his predecessor and mentor, Hugo Chavez, in 2013. It has slapped sanctions on Maduro's government for committing human rights abuses, undermining democracy and causing the country's debilitating economic crisis.

Canada and almost all countries in Latin America also recognized Guaido after the US announcement. Canada's center-left government opposes Maduro's authoritarian style and supports the opposition as a democratic alternative.

Many Latin American countries have in recent years swapped left-wing governments that supported Maduro for right-wing governments that oppose him. Brazil under its new far-right president, Jair Bolsonaro, is among the most notable turn-arounds. Colombia supports Guaido and the opposition to bring back stability to its neighbor. More than a million Venezuelan refugees have fled to Colombia since the country's economic crisis began.

The European Union has long criticized Maduro for undermining democracy and the rule of law, imposing sanctions in 2017. However, it has been softer in its support for Guaido than others. Germany, France and the United Kingdom say they support the opposition leader, but have not yet officially recognized him as Venezuela's president. Germany says it would recognize Guaido if Maduro fails to hold fresh elections.

In Latin America, left-wing governments in Cuba and Bolivia refused to recognize Guaido's declaration. During Venezuela's boom years, Caracas sent money and subsidized oil to Cuba. In exchange, Cuba sent educated professionals, including thousands of doctors. Close ties with Maduro's government has been a cornerstone of Bolivia's foreign policy since the election of socialist President Evo Morales.

In the Middle East, Turkey and Iran voiced their support for Maduro as well. Turkey said it opposed what it called "anti-democratic developments" in Venezuela. It has also bolstered its economic ties with the Maduro government in recent years. Iran shares Venezuela's anti-US foreign policy and the two oil-exporters work together in the Organization of the Petroleum Exporting  Countries (OPEC).

Mexico offered Maduro tepid support. It says it recognizes him because it wants to stay neutral. During his presidential campaign, Mexican President Andres Manuel Lopez Obrador pledged to pursue a disinterested foreign policy and focus on domestic problems.

China says it also doesn't interfere in other countries' affairs and warned the United States to stay out of the Venezuelan crisis. The Foreign Ministry said Maduro and the opposition should "remain rational and level-headed and seek a political resolution ... through peaceful dialogue within the framework of the Venezuelan Constitution." Beijing is interested in avoiding any disruption in its economic relationship with Venezuela, which owes China more than $20 billion.