What's at stake for Russia in Venezuela?

Russia could lose a lot if Nicolas Maduro is ousted in Venezuela. Moscow's massive loans to Caracas are only one piece of the puzzle — Venezuelan oil reserves could bring down the price of oil and upset Russia's economy. 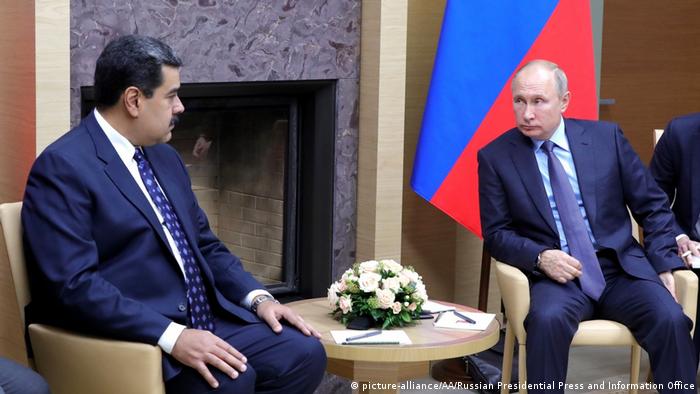 The regime of Nicolas Maduro is struggling for power against his opposition rivals in Venezuela. Maduro is backed by Moscow and his departure from power would also be a loss for Russia, in more ways than one.

Russia's most immediate worry is the oil giant Rosneft, which is majority-owned by the Russian state. In 2017, it was reported that Rosneft effectively granted a $6 billion (€5.26 billion) loan to Venezuela. The Venezuelan side was expected to repay it by giving Rosneft stakes in five major projects with their own energy company, Petroleos de Venezuela SA. The rest of the debt would be covered by oil deliveries.

As of late 2018, Rosneft owned between 25 and 40 percent of the five ventures but deliveries had been delayed, prompting Rosneft CEO Igor Sechin to travel to Caracas in November. However, taking into account that the deal is set to expire in 2019, it is safe to assume that Rosneft has already retrieved most of its money.

It also appears unlikely that a new government would expropriate funds provided by foreign investors — as long as these stakes were obtained legally, without corruption. In other words, any traders rushing to get rid of Rosneft stocks at the Moscow stock market this week may have acted prematurely.

The situation appears to be more complicated when it comes to loans that Russia approved to Venezuela for buying Russian arms. According to Russian media, Moscow has transferred some $11 billion to Caracas for this purpose in the last two decades. It is not clear how much of that sum has been repaid. However, there are reports that Moscow is restructuring Venezuela's debts under favorable conditions.

It is far from certain that a new government would be willing to pay the money back to Russia. For example, Ukraine is still refusing to repay a massive 2013 loan which Russia approved to boost pro-Russian President Viktor Yanukovych . However, even if Venezuela does not pay back its debt, the project would not be a pure loss to Russia. The funds were used to produce Kalashnikov rifles, military jets, helicopters, tanks and other Russian weaponry, boosting Russia's own arm industry.

Hitting where it hurts

All in all, Russia stands to lose about €11 billion if there is regime change in Venezuela. But this sum pales in comparison to the possible impact of Venezuela's enormous oil reserves on global markets. Experts believe that Venezuela has more oil than any other country in the world, including Saudi Arabia. However, after 20 years of mismanagement under Hugo Chavez and later Maduro, the oil industry has deteriorated dramatically and plays only a minor role on the world stage.

A new government could install more capable leaders in the oil sector, who could in turn revive Venezuela's oil industry and exports. Also, western — most likely American — companies could be allowed back into the country. This development could create a completely new playing field for global oil deliveries and bring down oil prices. This would be a worst-case scenario for Russia, whose economy relies heavily on oil and gas exports, and keeping the price of oil at the higher end of the scale.