German conservatives against UN migration pact | Germany | News and in-depth reporting from Berlin and beyond | DW | 06.11.2018

Opposition within the CDU to a UN migration pact has grown despite Chancellor Angela Merkel's backing. Critics say the Global Compact for Migration conflates economic migration and refugees. 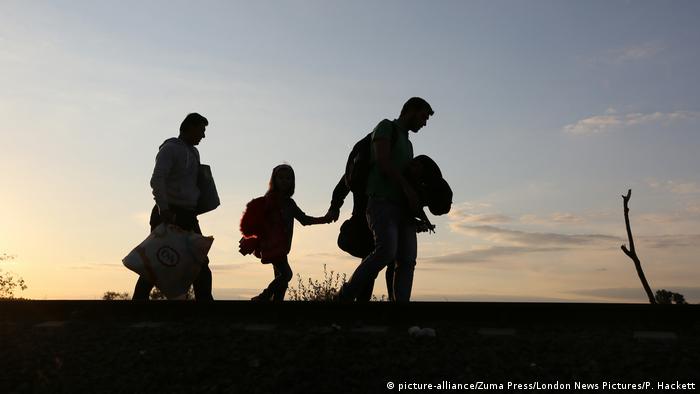 There are growing reservations within Angela Merkel's Christian Democratic Union (CDU) about Germany signing onto the United Nations' migration pact.

Marian Wendt, a CDU lawmaker and member of the Bundestag's home affairs committee, told DW on Tuesday that he was concerned that the compact did not distinguish between economic migrants and asylum-seekers, and was annoyed with the German Foreign Ministry for failing to communicate the purpose of the agreement properly.

The non-legally binding Global Compact for Migration was finalized in July and is set to be adopted by UN member states in December,

though eight countries, including the US, Australia, and Italy, have either already withdrawn or have signaled an intention to withdraw.

"It's less about the compact itself," said Wendt. "I think it's important that we create a global framework for the control of migration. I am mainly concerned about the way it was communicated. We as the CDU have squandered our credit when it comes to the issue of migration in the last few years. The trust of the people is not very strong on this issue with us. That's why we need to do everything to make sure we don't create the impression that something is being negotiated behind closed doors."

He and other conservatives will be speaking out against signing onto the UN pact in its current form, Wendt said, adding that the possibility of not signing up to it should be kept open.

The pact has been a major issue for far-right supporters in Germany, a fact that appears to have been picked up by some of the leading contenders to replace Merkel as  CDU leader in December. One of the three front-runners, Health Minister Jens Spahn, questioned Germany's commitment to the pact over the weekend.

"What is important is that Germany keeps its sovereign power to control, steer and limit migration," Spahn told the Welt am Sonntag newspaper on Sunday. Point 15 of the compact expressly confirms a country's right to control its own migration: "The Global Compact reaffirms the sovereign right of States to determine their national migration policy and their prerogative to govern migration within their jurisdiction, in conformity with international law."

Nevertheless, the anti-immigrant Alternative for Germany (AfD) party called a debate on the pact in the Bundestag for Thursday, telling a press conference that "its current form represents a threat to the national sovereignty of Germany, the democratic legitimacy of state action, as well as the principle of the rule of law." It added that though the agreement might not be legally binding, it "could under certain circumstances be understood as a customary international law within a few years."

Wendt rejected the idea that the CDU was merely reacting to pressure from the far-right following poor regional election results. "This is not about fear of the AfD, it's just analysis," he said. "Why didn't people vote for us? That's why it's a question of communication. We didn't communicate, we didn't talk about it, and then the AfD comes along with some false claims, which are total nonsense, but they get stuck on them because we don't argue against them suitably."

Alexander Dobrindt, head of the parliamentary group of Merkel's Bavarian allies, the Christian Social Union (CSU), also pointed out that the pact made no difference to German migration law as it stood, though he shared Wendt's concerns that the Foreign Ministry had failed to communicate the issue.

But the opposition Green party warned that the CDU was "playing with fire" by questioning the pact. "For us the migration pact is a success of multilateralism and a clear signal against the spread of nationalism, for example of someone like Donald Trump or [Hungarian Prime Minister] Viktor Orban," Green party migration spokeswoman Filiz Polat told DW.

The United States was the first to announce it would not join the pact. It was followed by Hungary, Australia and Austria. Poland, the Czech Republic, Slovakia and Italy have signaled they may withdraw as well.

The agreement, officially titled the Global Compact for Safe, Orderly and Regular Migration, marks the first time the UN has agreed on a list of global measures to tackle the challenges involved in migration while at the same time maximizing benefits for the countries taking in immigrants.

The compact is based on the recognition that the world needs to cooperate if migration flows are to be managed in a humane manner, while still taking account of the principle of state sovereignty. Some 258 million people currently live outside their country of birth worldwide, a number that is expected to increase because of climate change, trade, inequality, and population growth.

After Germany abolished the visa requirement for Georgian citizens, the number of Georgian asylum seekers in Germany has risen significantly. What is Georgia doing to halt migration, and has it been successful? (04.11.2018)