Both Angela Merkel's CDU and her center-left coalition partner, the SPD, are holding crisis meetings as they try to chart a new course. Urgent voices on each side could drag the parties away from the political center. 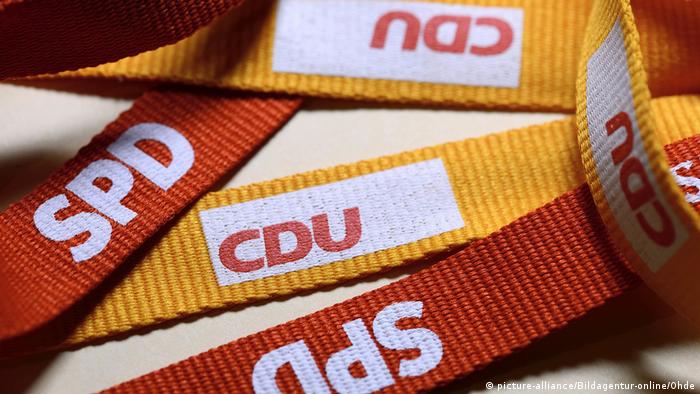 Germany's two besieged government parties each held leadership meetings in Berlin on Sunday to discuss their future after a dramatic week in which Angela Merkel announced she would soon be stepping down as leader of her Christian Democratic Union (CDU) and would not contest another election as candidate for chancellor.

The CDU's leadership committee is to spend two days setting out how the race to be Merkel's successor would be organized. It is likely that the 12 current candidates will make their cases in a series of regional conferences for party members over the next few weeks.

The party's major figures were predictably tight-lipped as they entered headquarters through an alley of reporters in the afternoon, though they professed that one principle was vital: that the party's grassroots membership would get its say in the decision, even though only around 1,000 regional delegates are eligible to vote at the decisive party conference in Hamburg on December 8.

"This is a process the CDU hasn't experienced for a long time, and that will do the national party good," said Armin Laschet, one of the deputy party leaders, who, as state premier of North Rhine-Westphalia (NRW), carries a particular responsibility in the current debate.

Another deputy leader, Thomas Strobl, said Merkel's decision to step down had given the party a "huge opportunity," and that he expected a lively debate over the coming days and weeks. The party should "be very sensitive to what the people in this country think and draw them into the process," Strobl told the DPA news agency.

Two of the three main candidates to succeed Merkel, Jens Spahn and Friedrich Merz, are from Laschet's state, which means that his endorsement could potentially carry much influence amongst his state delegates, and given that the NRW CDU is by far the biggest regional delegation, his say could conceivably swing the race. Naturally, he said nothing about which way he was leaning.

Meanwhile, the third candidate, Annegret Kramp-Karrenbauer, has already spent the last few months on what she dubbed a "listening tour" of the grassroots of the party. The CDU general secretary, formerly state premier of Saarland, is considered the closest to Merkel both personally and politically, while Spahn and Merz are widely considered more conservative in outlook.

Spahn, in particular, seems to want to chart a course towards the populist right. In an interview with the Welt am Sonntag newspaper on Sunday, the 38-year-old health minister suggested Germany should distance itself from the United Nations migration compact — known to be a particular concern among far-right voters. "What is important is that Germany keeps its sovereign power to control, steer and limit migration," he told the paper.

Spahn also said the party needed to "differentiate itself" from its current coalition partners, the Social Democrats. "Our image of humanity and society is fundamentally different from that of Social Democracy," he said.

The latest opinion polls show that the German political landscape is continuing to flatten out. The center-right Christian Democrats and the center-left Social Democrats (SPD), who have dominated German politics for decades and formed the German government for the last five years, are losing ground to parties with a more overt ideology and less reputation for strategic pragmatism.

A Forsa poll released this weekend had the CDU on 27 percent, even less than the 33 percent they reached at the last national election, closely followed by the surging Green party on 24 percent — a record high for the liberal environmentalist party. Meanwhile, the CDU's coalition partners, the SPD, are continuing to struggle: Forsa put them at only 13 percent, level with the far-right populist Alternative for Germany (AfD).

For that reason, the SPD's party leadership meeting on Sunday is likely to be even more fraught than that of the CDU; the Social Democrats are caught in an existential crisis over their political identity after recent regional election disasters in Bavaria and Hesse.

The SPD's left wing is doing all it can to drag the party closer to its grassroots and warning against continuing suffocation in coalition with the CDU. In an internal paper leaked to the public broadcaster ARD, deputy leader Ralf Stegner said that the party should not commit to the grand coalition "at any price."

Stegner's paper set out a new social-welfare reform that would end the sanctions-based unemployment benefit known as Hartz IV, which the SPD itself introduced under Chancellor Gerhard Schröder, and implement a new sanction-free minimum social security, known as a solidarity basic income.

Angela Merkel's conservative sister party in Bavaria has found a governing partner after punishing elections results cost the party its parliamentary majority. An official agreement has yet to be signed. (02.11.2018)