The German chancellor has lauded the country's sustained economic growth and low unemployment. Angela Merkel was speaking in her first video message after announcing she would stand down as political party leader. 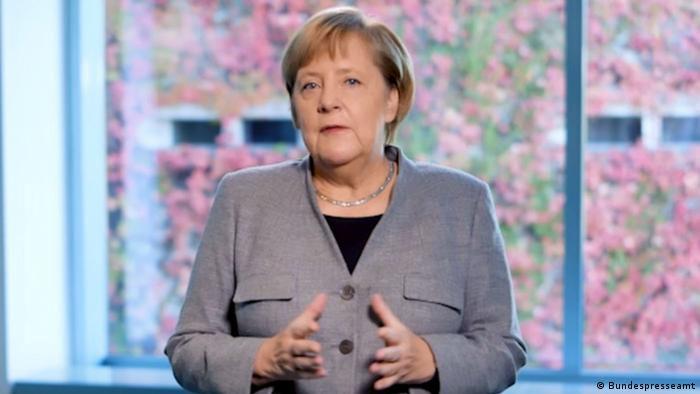 In her weekly video podcast, German Chancellor Angela Merkel avoided reference to her decision to step down as her party's leader and not to run for a fifth term as chancellor, choosing instead to address Germany's economic situation and the challenges facing the country in the future.

The Christian Democratic Union (CDU) politician said Germany "is well positioned" economically and is on course to achieve 1.8 percent growth in the coming fiscal year. She said that German policymakers would "need to remain vigilant to ensure the country's decade of economic growth continues" in the face of a slowing global economy.

She also lauded the country's 4.9 percent unemployment rate — the lowest since 1980.

Read more: One in five working Germans is marginally employed

Merkel said economic growth was the result of German exports, which are heavily dependent on the country's mid-sized companies, and domestic policy decisions that have led to an increase in consumer spending at home.

The chancellor also noted that the World Economic Forum in Davos ranked Germany the most innovative place in the world to do business.

Looking forward, Merkel warned that "the world does not sleep" and noted that digitalization and Asian dynamism in the digital sector clearly posed the biggest challenge to the country's continued economic growth. She stressed the importance of devising a new digital strategy as well as a roadmap for work in the field of artificial intelligence.

To that end, the chancellor vowed that the government would work closely with German businesses, especially mid-sized firms. She noted that measures taken by her "grand coalition" — consisting of the CDU, its Bavarian sister party the Christian Social Union (CSU) and the Social Democrats (SPD) — would help foster innovation.

Merkel specifically spoke of plans to offer tax incentives to mid-sized companies investing in research in the fields of digitalization and artificial intelligence. The tax incentives, she said, would further bolster companies already receiving government support for such research.

On Wednesday, a special advisory panel is set to deliver its assessment of Germany's economic outlook for the coming fiscal year. Government agencies and a number of think tanks have suggested that economic growth will continue, albeit at a slower pace than previously thought. Those experts point to the gloomy overall economic situation as grounds for slowing German exports.