Germany's and Russia's foreign ministers have visited the graves of soldiers who died in the World War II Battle of Stalingrad in Russia. It comes as pro-Russian separatists continue to occupy parts of eastern Ukraine. 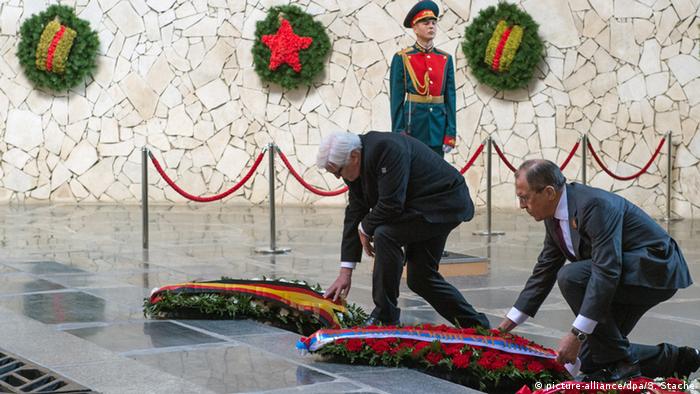 German Foreign Minister Frank-Walter Steinmeier and his Russian counterpart, Sergey Lavrov, visited soldiers' graves at what was formerly Stalingrad on Thursday, ahead of commemorations to honor the memories of those killed in the Second World War.

Now called Volgograd, the Russian city was the site for one of the bloodiest and most strategic battles of the war, with around a million people believed to have died there.

Steinmeier and Lavrov laid a wreath at the German and Soviet military cemetery, with Steinmeier praising the role of Soviet troops in World War II as instrumental in helping "in the liberation of Europe from the Nazi yoke."

The meeting was also an opportunity for the two leaders to discuss the ongoing conflict in eastern Ukraine, where pro-Russian fighters continue to battle for control against the central Kyiv government.

Russia has also been in a standoff with the West over pro-Kremlin rebels' decision to invade eastern Ukraine last year as well as over the Russian annexation of the Crimean Peninsula.

The West has imposed harsh economic sanctions against Russia, which are due to expire in July.

Steinmeier said the current strains on ties between Russia and the West made it even more important that he visit.

"As complicated as things have been, as different as our opinions are on different issues, faced with the memory of Stalingrad we have to try as much as we can to resolve the conflict in Ukraine," he said.

Lavrov echoed the meeting's significance, calling Germany "our most important partner in Europe and international affairs."

In a further nod to conciliation, the two foreign ministers will attend a "peace concert" Thursday evening, hosted by the Symphony Orchestra of Volgograd and Osnabrück.

Both men expressed optimism over progress made on the crisis in Ukraine, after a meeting held in Minsk the previous day between working groups from the Ukrainian and Russian governments, and separatist fighters.

Observers from the Organization for Security and Cooperation (OSCE) moderated the discussion.

"This is an important step because it means we could manage to enter the next phase of implementing the Minsk agreement," Steinmeier said.

The so-called Minsk cease-fire deal was struck in the Belorussian capital in February. Despite this, fighting has continued, with both sides violating the agreement.

This year marks 70 years since the Second World War ended. Commemorations have been taking place across Germany and Europe since January.

German Chancellor Angela Merkel will meet with Russian President Vladimir Putin on Sunday, and lay a wreath at the tomb of the Unknown Soldier in Moscow before formal discussions.

"We are pinning big hopes on the talks that are scheduled for the May 10 visit to Moscow by German Chancellor Angela Merkel," Lavrov said.

Like many Western leaders, Merkel has refused an invitation to attend the former Soviet state's Victory Day celebrations on May 9, in protest over the war in Ukraine.