The German Chancellor has refused an invitation to Russia's annual Victory Day parade. Many Western leaders are expected to boycott the event, but Kim Jong-Un is set to attend. 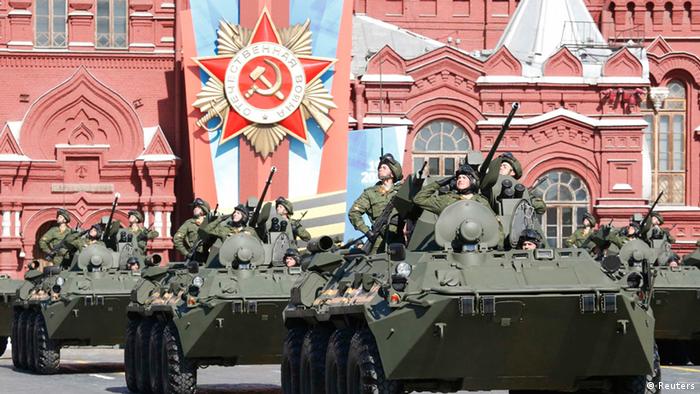 Germany‘s Chancellor Angela Merkel will not attend Moscow's annual Victory Day parade on May 9, but will visit the Russian capital a day later, her office confirmed on Wednesday.

Amid tensions over the conflict in Ukraine, Merkel declined an invitation to attend the Red Square commemoration of the Nazi capitulation to the Red Army in what has become an extremely popular public holiday for Russians. Last year's festivities (pictured above) came right on the heels on the controversial annexation of the Crimean peninsula.

The Chancellor will however lay a wreath on the Tomb of the Unknown Solider together with Russian President Vladimir Putin the following day, on May 10. Putin has already agreed to the plan, Merkel's spokesman Steffen Seibert said.

Seibert told reporters in Berlin that Merkel wanted to commemorate the event "appropriately and with dignity." He added that "in view of the Russian actions in Crimea and eastern Ukraine participating in the military parade was not appropriate."

Despite chilly relations, Seibert emphasized that "The chancellor considers it important to mark the joint remembrance of the end of the Second World War and the liberation from Nazism," and therefore would still travel to Moscow, if not to attend the parade.

Many Western countries, including Germany, accuse the Kremlin of backing pro-Russian separatists in eastern Ukraine by sending troops and equipment across the border. Many Western leaders are expected to boycott the parade, where North Korean leader Kim Jong-Un is among the awaited guests.

Putin's spokesman Dmitry Peskov said the refusal of certain Western leaders to take part in the celebration would not affect the essence of the day. According to Russian news agencies, leaders from Poland, Latvia, Lithuania and Estonia have already indicated they would not come.

"This will not affect the spirit of the holiday, its emotional aspect and the scale of the festivities," Peskov told radio station Russkaya Sluzhba Novostei.