Focus: China and the West - cooperation, competition and confrontation | Asia| An in-depth look at news from across the continent | DW | 14.01.2011

Focus: China and the West - cooperation, competition and confrontation

As China's President Hu Jintao embarks on a high-profile trip to the United States, we look at different aspects of the relationship between the West and Asia's emerging superpower. 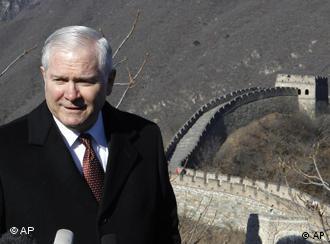 When US President Barack Obama hosts his Chinese counterpart Hu Jintao at the White House on January 19, their meeting will be overshadowed by a global shift in power. China's strength and influence have been growing at the expense of Western countries in a whole range of fields, from the economy to the military.

On the one hand, the West has benefited from China's rise, which has helped the world emerge from economic crisis. But many also feel threatened by China, and this has had an impact on how long-standing disputes between China and the West, on human rights as well as on currency issues, are evolving.

The rise of China as a superpower challenging or overtaking the US has for years been a hot topic in Washington. While many pundits have already declared Beijing a top power, experts paint a more nuanced picture. (18.01.2011)

For years, German China experts have complained that Germany’s media coverage of China is too negative. But now a German daily has claimed that the majority of German Sinologists kowtow to China. (22.12.2010)

The Chinese banking giant, the Industrial and Commercial Bank of China, is opening five more offices in Europe. It's a small move, but analysts say it could be the start of something much bigger. (17.01.2011)

China's President Hu Jintao kicks off a four-day visit to the US this week after a year of rather turbulent relations between the two countries. It would seem that the US is not as popular with Chinese people as it was. (17.01.2011)

US Defense Secretary Robert Gates toured China's nuclear command center before leaving for Japan. He said that his four-day visit had been "very successful." Next week, Chinese President Hu Jintao heads to Washington. (12.01.2011)

As Chinese Vice Premier Li Keqiang visits Germany, business is top of his agenda. China is on the lookout for German investors and is quick to point out it has 1.3 billion potential consumers. (06.01.2011)