China's President Hu Jintao kicks off a four-day visit to the US this week after a year of rather turbulent relations between the two countries. It would seem that the US is not as popular with Chinese people as it was. 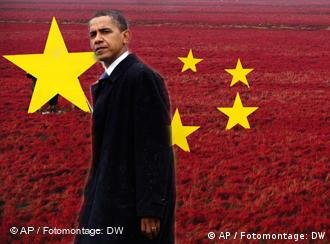 Many Chinese blame Obama for worsened relations between Beijing and Washington

China's Global Times newspaper recently published a survey on Chinese perceptions of the world. Although the US remains fairly popular, with 7.5 percent naming it as their favorite foreign country, this number has fallen considerably from over 20 percent in 2008.

Shi Yinhong from Beijing’s Renmin (People's) University was not surprised: "Most Chinese people are very critical of US foreign policy. Especially when it has to do with China. If you look at what has happened in the past year between the two countries, it is not difficult to understand why dislike has grown."

Tension has been high because of various issues, including an arms deal between the US and Taiwan, the currency spat, Google’s withdrawal from China, military maneuvers off China’s coast.

Another poll by the China Daily found that 40 percent of those surveyed said bilateral relations were in a "bad situation." Over 80 percent blamed US President Barack Obama. 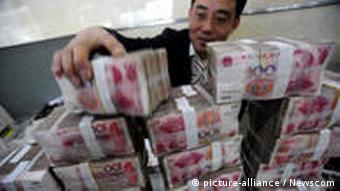 But Shi said propaganda played an important role: "Most people get their information from the state media. So one can’t expect a very differentiated opinion."

"The Global Times newspaper that conducted the first poll is definitely left-wing and has an anti-American stance," agreed Chinese blogger Jason Ng. "I don’t know who was surveyed. But the general attitude is definitely not so extreme."

When it comes to young people interested in education, the general attitude towards America seems to be extremely positive. It is the number one destination.

The 21-year-old engineering student Qi Yongcheng wants to do his Master’s in the US because that's where "pioneering technology hails from."

"On top of that, US education policy and grants mean that there are more possibilities for foreign students than in other countries," he pointed out.

Qi doubts that China will have overtaken the US within a few decades because it is not as creative or innovative. 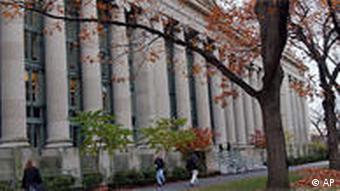 US universities such as Harvard are very popular with Chinese students

He and other students aspiring to go to the US have to improve their English to pass university entrance exams. Consequently, the English-language teaching sector is booming in China.

Yu Yifan works for one of the most important language schools in China, which has branches in over 60 cities and sees some 300,000 students pass through every year.

Yu said that his courses at the Shanghai branch were always full and explained that "over 95 percent of the students in my classes aim to study in the US. After the course they will take an exam to try to get a place at a US university."

Language and educational exchanges between the US and China might eventually lead to better relations at the top.

Hu Jintao arrives in the United States on Tuesday and is due to hold a summit with his US counterpart Barack Obama on Wednesday. He will also meet several US lawmakers and attend a lavish dinner at the White House.

US Defense Secretary Robert Gates toured China's nuclear command center before leaving for Japan. He said that his four-day visit had been "very successful." Next week, Chinese President Hu Jintao heads to Washington. (12.01.2011)