US wary of China as arms spending heads in opposite directions | World | Breaking news and perspectives from around the globe | DW | 10.01.2011

China is increasing its yearly military expenditure while expanding and modernizing its armed forces at a time when the US is slashing its own defense budget, a development that is making many Pentagon officials nervous. 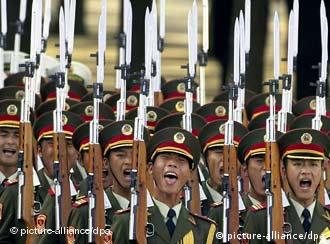 China's armed forces will be expanded and modernized

US Defense Secretary Robert Gates is in China holding strategy meetings with Chinese counterparts in an effort to lay the groundwork for President Hu Jintao's visit to the United States next week for a summit with US President Barack Obama.

High on the agenda will be the current tensions on the Korean Peninsula, the thorny issue of US arms sales to Taiwan and a proposed security agreement between the two countries relating to nuclear weapons, missile defense, space and cyber-weaponry.

After initial discussions on Monday, Gates endeavored to strike a positive tone despite evidence that the first round of talks were tinged by the frosty climate which has developed from the growing US-Chinese military rivalry.

On the one hand, the US is concerned that China is not doing enough to exert its influence as North Korea's main ally in the escalating potential war scenario in the Yellow Sea around the Korean Peninsula. On the other, China continues to simmer over Washington's military support and involvement in Taiwan, which led to military ties being suspended a year ago. Despite the recent thawing of relations, the US intends to provide a similar $6billion (4.6 billion euros) arms package for Taiwan this year and China is expected to once again suspend relations should the deal go through. 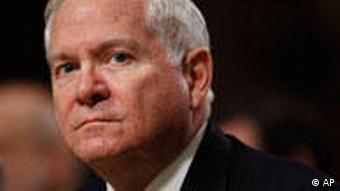 Gates's Defense Department will see huge cuts to its budget

China appears to be collecting credits in its rivalry with the United States as Washington has been forced to cut nearly $80 billion in defense spending over the next five years as it succumbs to the mounting fiscal strain of the financial crisis and its on-going military commitments in Afghanistan and Iraq.

While the Pentagon faces a cut to its weapons programs as part of the federal government's measures to cut its growing budget deficit, China will spend nearly $45 billion on its military this year, an increase of about 18 percent from 2006. The People's Republic is still some way behind the US in terms of military spending but with China remaining relatively robust in the current financial climate and the US struggling, Beijing has the potential to slowly increase its arms expenditure while Washington's radically decreases its own.

"The US used to be way ahead in terms of military technology, operational experience and global military presence and in recent years, most people in Washington didn't really see China as an imminent military challenge," Jonathan Holslag, a foreign policy expert at the Institute of Contemporary China Studies (BICCS) at the Free University Brussels, told Deutsche Welle.

"But things are changing. China's military modernization is climbing up the agenda as the new priority for US defense planners, mainly because China seems to be developing new ballistic and cruise missiles, quieter submarines, combat aircraft and systems for electronic warfare faster than expected."

Gates himself admitted before arriving in China that Beijing's new hardware, including a recently revealed stealth fighter jet, put some US capabilities at risk, telling reporters that "we have to pay attention to them, we have to respond appropriately with our own programs."

However, Dr. Gudrun Wacker, a China expert at the Asia Division of the German Institute for International and Security Affairs, believes that the US defense cuts will not mean a reduction in areas connected to China's military modernization.

"Gates announced before his trip to China that although the US had underestimated the speed of certain developments in China, especially the progress on the stealth fighter aircraft, the Department of Defense was of course aware of the Chinese efforts and will adapt to the situation," she told Deutsche Welle. 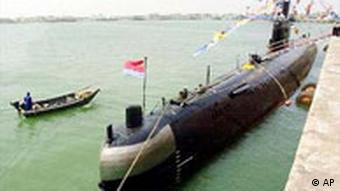 China wants to protect its interests with a stronger navy

With China's defense policy intrinsically linked with the protection of its economic status and dependence on imported oil and raw materials, it becomes increasingly likely that Beijing sees its future military capability stretching further afield than the traditional boundaries of protecting its own borders and managing internal conflicts. It is a strategy which could remake the maritime balance of power, first in Asia, and then in the rest of the world.

Its ambitious program to modernize its navy and expand its reach to protect China's global interests wherever they may be has led to an increase in the size and capability of China's elite submarine force, the cornerstone of Beijing's growing maritime strength. In turn, the appearance of these super-fast, heavily armed subs in waters previously alien to Chinese naval forces is causing major concern in the US.

"Both countries are locked in a traditional security dilemma," Holslag said. "While the United States tries to keep its security perimeter as close to the Asian continent as possible, China wants to reach further into the Pacific to deter potential American interference. Because of this geopolitical conundrum, I don't really believe that the two powers will get far in developing military synergies."

China's improving and increasing naval capacity could also have an effect on the situation regarding Taiwan, with the US claiming that Beijing's ultimate target is to limit the US military's freedom of movement in Asia. The US is currently the only country that regularly operates aircraft carriers in Northeast Asia - and China's new submarines are specifically armed to sink such vessels.

"China does not want to be drawn into an arms race with the US," Wacker said. "Instead, the strategy has been to pursue selected capabilities that are intended to discourage the US from intervening in a Taiwan scenario and in general to make access to areas around China’s coast more difficult."

"More transparency and more trust are definitely needed between the US and China to avoid misunderstandings, misconceptions and miscalculations on either side." 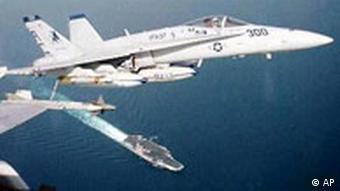 Pentagon officials have admitted that China's acquisition of submarines with these niche capabilities has raised questions over Beijing's motives, which in turn has added greater urgency to Washington's desire for more access to Chinese forces, more exchanges and expanded joint exercises. China, it seems, remains unwilling to give up any advantage it has - to the detriment of any future détente.

"Today we see two powers that are economically highly vulnerable, but with the US still holding lots of advantages when it comes to military posturing and political alliances," Holslag said. "Such balance, though, is not static and therefore we are entering an important period of strategic uncertainty."

A $6.4-billion (4.6-billion euros) arms deal between the United States and Taiwan has enraged China and threatens to endanger cooperation between Washington and Beijing on key international and regional issues. (01.02.2010)

A potential deal to supply weapons to Taiwan has been approved by the US State Department. It includes the sale of anti-ship and air-to-air missiles, as well as a radar surveillance system.