China withstood the global financial crisis much better than Europe and the US. Beijing’s economic and political weight is becoming mightier by the day. 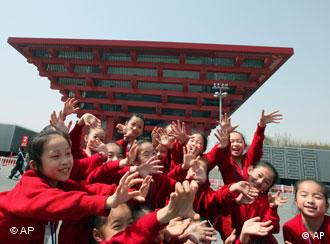 For some time now, there has been a sense among Sinophiles and Sinophobes that the only thing growing faster than the Chinese economy is Chinese self-confidence.

This year, it reached even greater peaks. In the summer, China put on the biggest World Expo ever, attracting a record 73 million visitors. The country now has the world’s biggest high-speed train network, and no computer is faster than the "Tianhe 1A" in China’s northern port of Tianjin.

Not only has China promised to come to the rescue of the EU, as it goes from one financial crisis to the next, it has also invested billions into its scramble for "soft power". Confucius Institutes have been set up all over the world to promote Chinese language and culture, and China’s international media are expanding. The idea is to assure the world that China’s rise will be a peaceful one. But in September, Beijing showed its less friendly side when Japan seized a Chinese fishing boat and its captain, after they supposedly strayed into disputed waters and rammed a Japanese coastguard boat.

That Beijing would protest was clear, but its reaction was harsher than expected. Beijing broke off all governmental contact with Tokyo and put a stop on the export of rare earths to Japan. Even when Japan finally released the captain, Beijing called for an apology.

China practically has a monopoly on the world’s rare earths, which are indispensable in many high-tech products. Hu Xingdou, an economist at Beijing’s University of Science and Technology, explains what this potentially means for the future. "Obviously it’s good for China that it has raw materials, which it can use as a strategic instrument. China could decide to sell rare earths only to countries that behave as it wants – and exclude others."

Meeting the Dalai Lama is bad for business

A study published by Goettingen University this fall indicated how China is using its economic strength for its political aims. It found that when countries receive the Tibetans’ spiritual leader, the Dalai Lama, their exports to China decrease by an average 8 percent.

Especially exports of ships and planes, one of the study's co-authors Nils-Hendrik Klann explains, "Such goods are not usually bought by normal consumers but by trade delegations for example. Such trade delegations are less likely to visit a country which has received the Dalai Lama."

In future, this might be considered the "Liu Xiaobo effect." Beijing exercised enormous diplomatic pressure earlier this year to prevent Chinese dissident Liu Xiaobo from being awarded the Nobel Peace Prize, and embassies from attending the awards ceremony in Oslo.

Ma Zhaoxu from the Chinese foreign ministry avoided mentioning Liu’s name at press conferences. "The person you are talking about broke Chinese laws and is a sentenced criminal. We have made our position clear many times. We refuse that a lot of fuss be made and we refuse all interference in our matters."

All the EU states, which China sometimes tries to play against each other, showed unity in December and turned up to the ceremony.

For years, German China experts have complained that Germany’s media coverage of China is too negative. But now a German daily has claimed that the majority of German Sinologists kowtow to China. (22.12.2010)