Hong Kong has also started administering its first COVID vaccines as part of a plan to inoculate all adults by the end of the year. Follow DW for the latest. 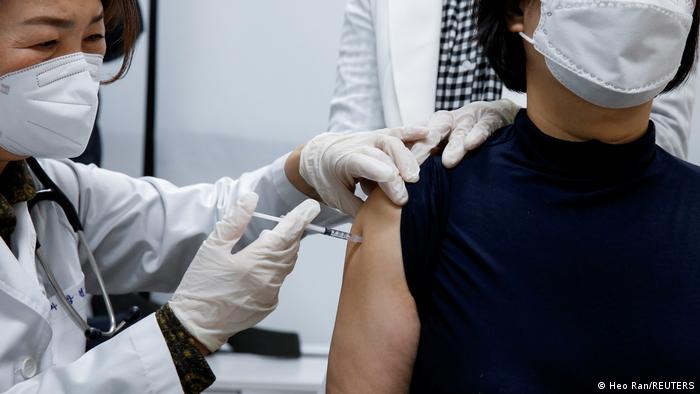 South Korea began a mass immunization drive on Friday by giving coronavirus shots from AstraZeneca to staff and residents at nursing homes.

Authorities plan to inoculate 70% of the population of 52 million by November, with the aim of returning to some semblance of normalcy by the end of the year.

"Let us all take every step forward to return to those days that we miss," said Prime Minister Chung Sye-kyun, as he urged all citizens to take the free jabs.

More than 5,000 caregivers and patients in care facilities were set for the first vaccinations. However, authorities said people over the age of 65 would not receive the AstraZeneca vaccine, citing a lack of data on its effectiveness in the elderly.

Inoculations with another vaccine, developed by BioNTech-Pfizer, are expected to begin on Saturday.

South Korea has so far recorded 88,922 coronavirus infections and 1,585 deaths.

Hong Kong also kicked off its vaccination campaign on Friday by administering China's Sinovac shot to health care workers and people over 60. The territory has also struck deals to secure doses of the AstraZeneca and BioNTech-Pfizer vaccines, and plans to inoculate all adults by the end of the year.

Following months of protests, Sri Lanka has scrapped a rule banning the burial of people whose deaths were caused by COVID-19. The government imposed the measure in March, saying burials could contaminate groundwater and help the virus to spread. Instead, it ordered bodies of coronavirus victims to be cremated. That sparked a backlash from Muslim groups, who said the ban had no scientific basis and that cremation went against their faith.

Philippines President Rodrigo Duterte approved a law that grants indemnity to vaccine makers if their COVID-19 shots cause adverse side-effects. Duterte's office said that the law would help speed up the purchase and administration of vaccines, according to Reuters.

The Australian state of Victoria will start easing coronavirus restrictions from Friday night, starting 11:59 p.m. local time. Authorities said outdoor gatherings could be increased to 100 people and households could host up to 30 guests.

Measures imposed in December were tightened further in early February to contain an outbreak linked to a quarantine hotel in the city of Melbourne. Australia has reported just under 29,000 cases and 909 deaths — most of them in Victoria.

The head of Germany's Robert Koch Institute (RKI) for infectious diseases has warned the public to "continue to be vigilant" in abiding to social distancing rules in order to stave off a third wave.

"Alongside the positive developments, we are currently seeing a few clear signs of the trend turning," RKI head Lothar Wieler told a news conference.

Complacency could undo any progress made thus far, he added, given that infection rates in Germany were stagnating rather than decreasing. Wieler also urged Germans not to reject a vaccine if they are offered one, following reports from officials that some people are turning down the AstraZeneca jab.

European Union leaders taking part in a virtual summit have backed the idea of a bloc-wide vaccination passport scheme.

Belgium reported that the coronavirus variant, which was first detected in Britain, is now linked to more than half of the reported cases, according to a top official at the Belgian Scientific Institute of Public Health, Steven Van Gucht.

Prime Minister Alexander De Croo announced prolonging the restrictions, which were expected to be relaxed this week.

In the Netherlands, an appeals court ruled that the curfew, which the government imposed since January 23, was "justified," overturning a decision earlier this month that the government had overstepped its powers.

The Hague Court of Appeal said the 9 p.m. to 4:30 a.m. curfew was necessary to tackle the coronavirus pandemic.

The government has relied on the parliament to legitimize the curfew, which sparked riots in January.

Ivory Coast has received its first shipment of 504,000 doses of the AstraZeneca vaccine through the COVAX initiative.

The West African country is the second in the world to receive a COVAX shipment after Ghana.

The government is prioritizing healthcare workers, security forces and teaching staff in the commercial capital Abidjan, where 95% the country's infections have been recorded.

Canada has approved the AstraZeneca vaccine and has ordered more than 20 million doses from the supplier.

"With Pfizer, Moderna, and now AstraZeneca, Canada will get more than 6.5 million doses before the end of March," Prime Minister Justin Trudeau told reporters.

"And there will be tens of millions more doses to come between April and June," he added.

Brazil's death toll from the coronavirus pandemic has passed 250,000, a year after the virus was first detected in the country, according to Health Ministry figures. Brazil has the second-highest tally of deaths in the world after the United States.

This week has been the deadliest yet in Brazil, with a daily average of 1,149 deaths over the past seven days. One reason for the deteriorating situation is the circulation of a new, more contagious variant from the Amazonas state.

Brazil began its vaccination campaign in mid-January, but supply problems mean it will have a hard time meeting the government's pledge of inoculating the entire population of 212 million people by the end of the year.

Colombia will extend its state of emergency by three months — until at least the end of May — to bring down coronavirus infections, President Ivan Duque said.

"The large majority of countries are upholding states of emergency and we will do the same," he said in a televised address.

Colombia has so far administered 66,000 vaccine doses to health workers and those aged over 80. Duque added that the country was in talks to secure additional Sinovac doses from China, on top of deals sealed with a number of other pharmaceutical companies.

Argentina has received its first shipment of the COVID-19 vaccine from Chinese drugmaker Sinopharm. The delivery of 904,000 doses will be added to the 1.22 million doses the country has already received of Russia's Sputnik V vaccine.

About a dozen troops aboard a US Navy warship operating in the Middle East have tested positive for the coronavirus, according to authorities. The USS San Diego, which sails with nearly 600 personnel, is currently docked in Bahrain.

"All positive cases have been isolated on board, and the ship remains in a restricted COVID bubble,'' spokeswoman Cmdr. Rebecca Rebarich told the Associated Press. She said "several persons" were under investigation for possible virus symptoms on another US warship, the USS Philippine Sea.