Rodrigo Duterte has praised Russia's efforts to develop a "free" COVID-19 vaccine for the Philippines. To alleviate fears, Duterte said he will offer to be "the first they can experiment on" in a public vaccination. 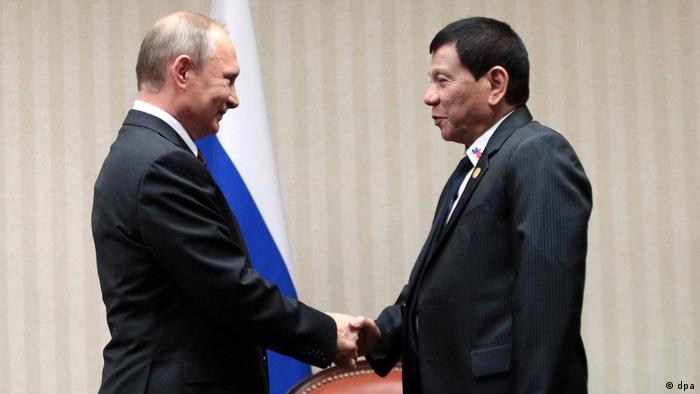 Philippine President Rodrigo Duterte confirmed he has accepted Russian President Vladimir Putin's offer to provide a Russian COVID-19 vaccine  when it becomes available and said he is willing to participate in trials.

"When the vaccine arrives, I will inject it publicly. Experiment with me, that's fine. If it works on me, it will work on everyone," the Philippines leader said in a televised speech late on Monday.

Duterte's office on Tuesday said the Philippines is ready to collaborate with Moscow on vaccine trials, supply and production.

"The Philippines stands ready to work with Russia on clinical trials, vaccine supply and production, and other areas deemed practicable by relevant Philippine and Russian agencies to address this global health emergency," a government statement said.

"I will tell President Putin that I have huge trust in your studies in combating COVID and I believe that the vaccine that you have produced is really good for humanity," Duterte said.

To reassure the Filipino public, Duterte said: "I can be the first they can experiment on."

The Filipino leader said he is confident of the effectiveness of Russia's vaccine, which he said will be ready by December, when "the Philippines will be free of COVID-19 and will be able to enjoy a peaceful Christmas."

Read more: Opinion: We need to deal with our coronavirus panic

Moscow received regulatory approval from the Russian Health Ministry to register a COVID-19 vaccine, Putin said on Tuesday, adding that Russia it is ready to supply it to the Philippines or team up with a local company to mass produce it.

Duterte suggested that Filipinos could participate in clinical trials but did not specify the laboratory behind it. He also did not give details about how Putin made the offer or the terms of the agreement.

"They want to provide us with the vaccine; they haven't said pay for it. I think President Putin wants to help us for free," he said.

Duterte has not hidden his admiration for the Russian leader in the past, having referred to Putin as his "idol" and "my favorite hero."

International health experts have voiced concern about the global race to develop a COVID-19 vaccine and how speed could compromise safety.

The Russian government said that the vaccine developed by Russia's Gamaleya Institute is the world's first. An immunization campaign is slated to begin in October.

Duterte also said that Chinese President Xi Jinping promised in July that the Philippines would be one of the first countries to benefit from some of the three most advanced Chinese vaccines in clinical trials.

The Philippines has registered among Asia's highest numbers of coronavirus infections, which rose to 139,538 on Tuesday after reporting 2,987 new cases.

Duterte restored a lockdown in and around the capital, Manila, for an initial two weeks amid a rise in infections during a period when restrictions were relaxed.

If the situation becomes a "runaway contagion," Duterte promised on Monday to mobilize the military to enforce the lockdown.

The Philippines' lockdown has been among the world's strictest. Rights groups have expressed concern about Duterte's approach and police conduct in enforcing COVID-19 measures.