Coronavirus: Sri Lanka′s forced cremations spark anger among Muslims | Asia | An in-depth look at news from across the continent | DW | 03.02.2021

Sri Lanka's controversial policy to cremate the bodies of COVID victims has outraged Muslims, for whom cremation is forbidden. Critics say the decision isn't based on scientific evidence and targets minorities. Zeenat-ul-Razaniya has no news about the body of her deceased husband Mohammed Hilmi Kiyasdeen, who suffered from kidney failure and died on November 30 last year.

The family had taken him to the hospital, where he was due to undergo a dialysis procedure. The family was shocked to learn that Kiyasdeen would be cremated as per the regulations for those who die of coronavirus-related complications.

"We were not shown any reports to prove the status of his infection. He showed no [COVID-19] symptoms. He was in close contact with us in his last days," Zeenat told DW, adding that she and her three children all tested negative for the virus.

"How is it possible that he had the virus? They just forcibly took away the body," she said.

It has been a distressing experience for the family.

"It should be left to the kin of the deceased (to decide) what they want to do. We don't even know what they did to his body," Zeenat said, stressing that the family still has no answers about her husband's remains.

President Gotabaya Rajapaksa's government claimed that burying deceased victims of COVID-19 could contaminate groundwater, despite World Health Organization (WHO) guidelines that stipulate burials are safe and pose no risk during the pandemic. 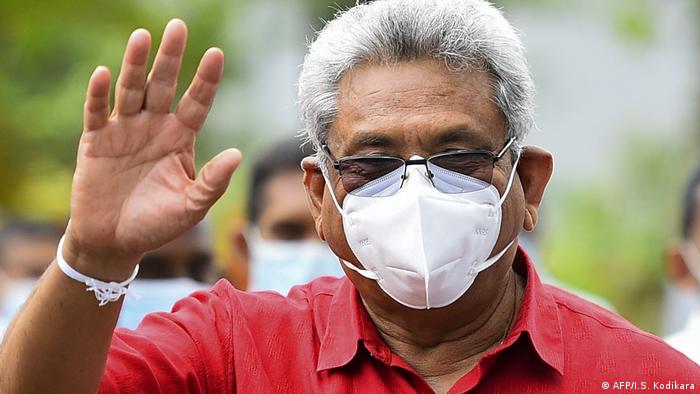 Several Muslim and Catholic families, health professionals and religious leaders have challenged the Supreme Court's ruling on cremations, requesting evidence that burials contaminate groundwater. The court, however, has dismissed all such petitions.

"This is a human rights issue. Burials are allowed in every country in the world. The government should answer why it is denying a dignified burial to its dead citizens," Azath Salley, a politician and former governor of Western Province, told DW. "Is this government punishing Muslims for not voting for them?" he added.

Nineteen-year-old Mohammed Minhaj was forcibly cremated after he died of COVID-19 complications in October, according to family members.

"We were afraid and were left with no other choice. It was forced on us," said Mazeer.

The family seeks justice and wants an immediate resolution to the issue.

In December, the forced cremation of a 20-day-old infant without the consent of the family prompted nationwide anger. Both of the baby's parents tested negative for COVID-19.

There have also been instances of cremation where authorities later acknowledged the deceased victim did not have the disease.

Such cases have not only enraged Sri Lanka's minority groups but have also exposed the religious and ethnic fault lines in the country.

"For families already grieving the loss of a loved one, the Rajapaksa government's forced disposal of remains in a manner contrary to their beliefs is an outrageous and offensive assault on religious rights and basic dignity," said Meenakshi Ganguly, South Asia director at Human Rights Watch.

In recent years, there have been several instances of rioting against Muslims in the country. Ongoing tension escalated following the deadly 2019 Easter bombings carried out by local Islamists.

Since then, a climate of fear and reprisals against the Muslim community has gained ground.

Last year, four UN special rapporteurs appealed to the Sri Lankan government, stating that the cremation policy violated the right to freedom of religion. They called on the government to combat attempts to instigate religious hatred and violence.

"We appeal for humanity to prevail. The government should follow the WHO guidelines. Using this rule as a smokescreen to persecute minorities should stop immediately," said Azath Salley.

Sri Lanka has experienced a surge in coronavirus cases since October. The country has recorded more than 65,300 COVID-19 cases with 323 deaths.

Muslims comprise about 10% of Sri Lanka's population of 21 million, but they have been disproportionately affected by the pandemic, according to the Sri Lanka Muslim Council.