How Sri Lanka successfully curtailed the coronavirus pandemic | Asia | An in-depth look at news from across the continent | DW | 18.05.2020

The island nation's high testing rate coupled with its established healthcare and surveillance system has kept COVID-19 mortality at bay. However, it seems the country's Muslims are not equally reaping benefits. 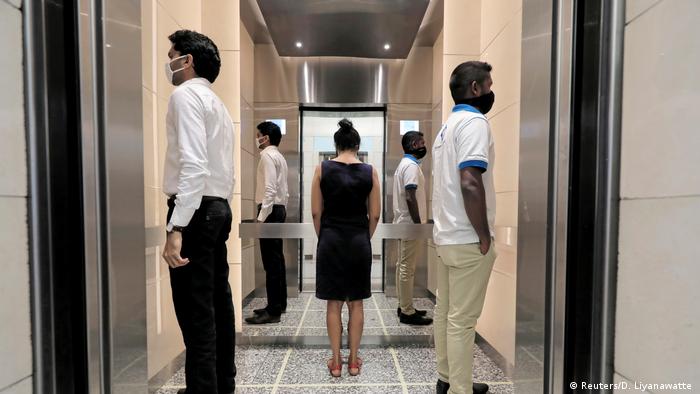 Sri Lanka reimposed a 24-hour curfew on Saturday in an apparent move to restrict people's movements during the weekend, even though the government has begun easing a two-month lockdown.

The curfew relaxed on Monday morning with health authorities saying SARS-CoV-2 is under control in the Indian Ocean island nation. Private businesses and government offices had already reopened last week.

With a population of about 21.5 million people, Sri Lanka has only 960 confirmed cases of the novel coronavirus with nine deaths. Sri Lanka's success story can be partially attributed to its relatively high coronavirus testing rate. As of April 30, the country was conducting 930 tests per 1 million people, in comparison to other South Asian countries such as Bangladesh (393), India (602) and Pakistan (703).

According to the World Health Organization (WHO), Sri Lanka also has seen milder cases of COVID-19 due in part to an early lockdown.

"More than 50% of the COVID-19 cases in Sri Lanka are of people between the ages of 20-60. These are relatively younger people who are less vulnerable to a severe presentation of the disease. A reason why most of the cases are mild may be that the lockdown in Sri Lanka started very early," Razia Pendse, the WHO's representative to Sri Lanka, told DW.

Health experts from around the world have been using Sri Lanka's healthcare system as a case study since the 1980s.

In 1985, the Rockefeller Foundation's report, Good health at low cost, identified Sri Lanka as one of the countries that successfully secured good healthcare at low costs. The country has a legacy of early, decades-long investment in its health system and low overall spending. Most Sri Lankans live within 3 kilometers (1.9 miles) of a public health facility, and since 2000 there has been an average of three hospital beds per 1000 people (compared with the average of two beds per 1000 people in middle income countries).

According to the report, good geographic access combined with a lack of financial barriers to public facilities produced a relatively equitable health system in Sri Lanka.

Having learnt from its past experiences with numerous communicable and non-communicable diseases, Sri Lanka also invested in its public health surveillance system, which has proven to come in handy during the current coronavirus pandemic.

Sri Lanka closely monitored the pandemic's movement right after the first case appeared in the nation, tracking any potential COVID-19 suspects. "The first case came out in Sri Lanka in the last week of January, after which there were no cases till about mid-March. During that gap, the government ensured that the public health surveillance was activated to find any cases with respiratory illnesses. Once the cases were identified, we conducted the needed diagnostics so that we were able to rule out any suspected COVID-19 cases," explained Pendse from the WHO.

Sri Lanka had already developed a surveillance system based on the Open Source DHIS2 platform in early 2020. The system has since become the basis for the worldwide deployment of the DHIS2 COVID-19 response package via the Health Information Systems Program (HISP) to respond to the outbreak.

The country also released the mobile-app COVID Shield to help people keep track of their health and provide support during self-isolation and quarantine. The app is now being deployed in several other countries, including the Maldives.

In addition, the Sri Lankan government also closed down public health clinics and instead started delivering routine health checks and medication directly to the homes of patients. A hotline was created to allow non-COVID patients seek advice from healthcare workers.

However, the southern Indian state of Kerala has had a similar approach to the coronavirus pandemic as Sri Lanka. Kerala implemented a lockdown much before the rest of the country. The state, which had already dealt with a previous outbreak of another disease, effectively traced people with respiratory symptoms similar to those found in COVID-19 and isolated the infected patients.

Despite its success in dealing with the COVID-19 pandemic, Sri Lanka's handling of the outbreak is not without its criticism. Members from the country's Muslim minority have allegedly become stigmatized as carriers of the virus. Of the nine people who died of COVID-19 in Sri Lanka, four came from Muslim communities.

Religious tension in the country has been on the rise following last month's anniversary of the 2019 Easter bombings. On April 11, the Sri Lankan government further exacerbated religious divisions when it amended its guidelines for the disposal of COVID-19 corpses – making cremation mandatory. Several Muslims decried the move, saying that cremation was against their religious right to bury the dead.

Sri Lankan authorities then arrested retired government official Ramzy Razeek after he criticized the cremation of a Muslim COVID-19 victim and warned against increasing hate propaganda against Muslims on social media.

According to guidelines from the WHO, dead bodies of COVID-19 victims can be cremated or buried.

Sri Lanka also faces the risk of a possible new wave of the virus from imported cases. The country has over a million migrant workers abroad, of whom about 60,000 want to return home, according to the International Labor Organization.

However, one of the conditions for repatriating citizens back to Sri Lanka is based on the availability of quarantine facilities, explained Pendse.

"The influx of people is being managed according to the accommodation available in existing quarantine facilities. There has been an increase in the capacity for quarantine from when the pandemic first began," she said.

Muslims in India are reportedly facing a surge in threats and fake news targeting them, after a religious meeting in March was identified as the source of a major infection cluster. Indian authorities deny these reports. (14.05.2020)