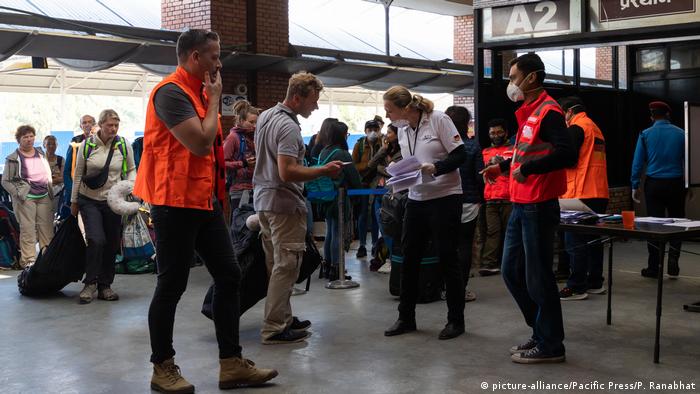 Germany and other foreign governments have stepped up their efforts to repatriate thousands of holiday-makers who are currently stuck in remote locations across Asia due to the COVID-19 pandemic.

On Friday, a Qatar Airways flight chartered by the German government evacuated more than 300 people from Nepal, the majority of whom were German nationals.

Berlin plans to fly out another set of tourists from Nepal on Saturday, news agency AFP reported. The Australian Embassy in Nepal also said it was trying to arrange a special flight.

Nepal, which has restricted all international flights coming into the country until April 1, is currently in talks with several countries to evacuate an estimated 10,000 tourists.

"We don't have information about a flight back to Belgium yet," Elka Wallraf, a teacher stranded in the village of Phakding near Mount Everest, told AFP.

Tenzing–Hillary Airport, the only airport connecting tourists to the Mount Everest region, currently has more than 200 trekkers stuck at the airport, Dhurba Shrestha, an airport official, told The Associated Press.

Some tourists in Nepal are being given temporary reprieve by hotels, which are giving free lodging and meals.

Thousands of others are stranded across Asia, in places like Sri Lanka, the Maldives, Thailand, India and also in New Zealand.

The US plans to evacuate its citizens in Pakistan next week, while France and Germany are currently negotiating charter planes to evacuate their nationals from India.

"I get text messages from my parents and my friends every day and all day and they're all asking when are we returning home but we don't know and they don't know and we all have to wait", Susi Vormwald, a German national stranded in New Zealand, told Radio New Zealand.

About 17,000 foreign tourists in Sri Lanka are being allowed to use their canceled flight tickets as passes to get around a curfew. The Indonesian government has automatically extended visas for all tourists stranded in Indonesia.