Nepal′s delicate balancing act between China and India | Asia | An in-depth look at news from across the continent | DW | 09.03.2020 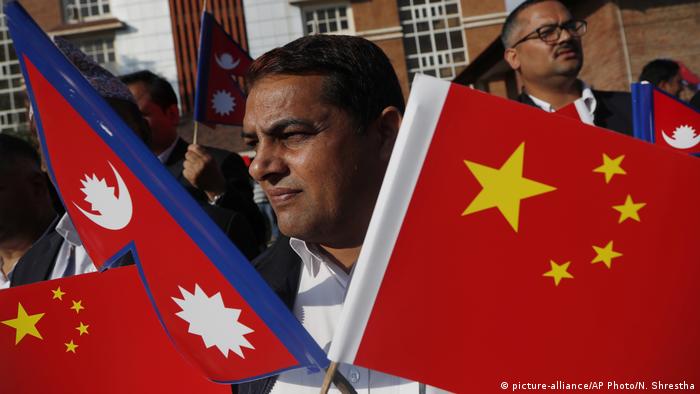 The Kathmandu Post, an English-language newspaper in Nepal, ruffled Chinese feathers in February when it published an article criticizing Beijing's handling of the COVID-19 virus outbreak. The article blamed China's authoritarian political system for contributing to the spread of the virus and turning it into a pandemic.

The Chinese Embassy in Nepal spared little time in putting out a statement condemning the Kathmandu Post for its scathing editorial. The embassy threatened to take further action against the newspaper and singled out Anup Kaphle, its editor-in-chief, for being "biased on China-related issues."

China's harsh response toward the Nepali newspaper came at a time when Beijing has greatly ramped up its investments in Nepal. The Kathmandu Post has alleged that Chinese aid to Nepal comes with "strings attached."

Kapil Shrestha, professor of political science at Tribhuwan University in Kathmandu, agreed with paper's view. "Nepalis interpret the embassy's statement as an unwarranted interference in the sovereignty of Nepal. It's an act of intimidation to the extent that it blackmails Nepal," Shrestha told DW.

In the current fiscal year, over 90% of foreign direct investment (FDI) in Nepal is from China. Beijing pledged nearly $500 million (€436.9 million) in financial aid to Nepal in October last year when Chinese President Xi Jinping visited the Himalayan country.

China has already pumped millions of yuan into infrastructure and hydropower projects in Nepal. Both countries share ever closer trading relations and Nepal has signed up for the Belt and Road Initiative (BRI), a Beijing-led gigantic infrastructure program that includes the building and upgrading of transportation and commercial links.

"China is a rising power and it is looking to project its power primarily through investments. China is sharing its prosperity with smaller countries like Nepal and these countries are trying to maximize benefits from China," K. Yhome, a senior fellow with the Observer Research Foundation, a Delhi-based think tank, told DW.

However, with big investments comes big influence, particularly if the investor is China. Nepal, whose economy relies significantly on trade, has a growing trade deficit with China. This gives Beijing leverage over Nepal, say observers.

Akhilesh Upadhyay, a Kathmandu-based journalist who follows Nepal-China relations, believes that one can't draw a dichotomy between economic and political power. "Nepal is benefiting from strong trade ties with China, and this is benefiting both countries," he told DW.

"We should look at Nepal-China trade and investment as a win-win situation for both countries. One area that Nepal needs to continue to work in is improving its trade deficit. The government has to negotiate the best deal so that we can increase our exports," he added.

"India and Nepal also have good trade relations. Culturally and in terms of shared values, India and Nepal are quite close and it will be difficult for China to replace India in that sphere," Upadhyay stressed.

For decades, Nepal has been dependent on Indian ports for its commerce, with two-thirds of goods to and from Nepal passing through them. In a bid to cut back on this reliance, Kathmandu signed a transit protocol with Beijing last year.

The protocol, which came into force on February 1, gives Nepal access to four sea ports and three land ports in China. The protocol was inked just months after India lifted a blockade on the supply of essential items such as fuel and medicines to Nepal. India had imposed the blockade after Nepal refused to make amendments to its constitution.

The transit protocol, which will reduce the time spent on bringing goods into Nepal, has been met with mixed reactions in the country. "The new transit protocol gives Nepal the alternative to use China's ports if there is any altercation with India. The transit protocol is also seen as a political achievement for the government," Prakash Bhattarai, a former Asia Global Fellow at the University of Hong Kong, told DW.

However, the border between Nepal and China is expected to become more porous with the agreement. This is an issue for Tibetans, who try to escape China by entering Nepal, say experts.

China has always pushed Nepal to increase monitoring on its border. According to a confidential document published by WikiLeaks in 2010, Beijing demanded that Kathmandu strengthen border troops. The document also stated that China would reward Nepali forces if they handed over Tibetans fleeing across the border.

Nepal has already signed several security agreements with China and operationalized border security cooperation over the course of several years. The Himalayan nation has also affirmed its commitment to the "one China principle," acknowledging that Tibet is China's internal issue. Furthermore, Nepal has promised to not allow any anti-China activities on its soil.

"The Nepali government definitely doesn't want Tibet to be an issue with China. This can be seen from the swift suppression of protests by Tibetans in Nepal during the 2008 Beijing Olympics. They will do their best to control the Tibetan population within Nepal," Krzysztof Iwanek, head of the Asia Research Center at War Studies University in Poland, told DW.

Nepal has yet to see an impact of political interference from China, but its policies are already veering toward appeasing China, say analysts. This spells trouble for China critics in the country and over 20,000 Tibetans living there.

New Delhi has taken note of China's steadily growing influence in Nepal. As part of India's "neighborhood-first" policy, New Delhi is stepping up its political, economic and even military engagement with its neighbors.

However, India is lagging behind China when it comes to expanding its trade and investment links with its regional partners, particularly with Nepal.

"China and Nepal have a direct internet connection now, which means that Nepal no longer has to be dependent on India for the internet. Earlier, India theoretically had the capacity to disconnect services to Nepal. That is no longer possible as China has established a direct connection with Nepal, despite the barrier of the Himalayas," Iwanek told DW.

An area where India continues to have an upper hand over China is its presence in Nepal's culture, language and social life.

Lack of Mandarin language fluency in Nepal has been cited by some experts as a barrier to deepening China-Nepal relations. But China seems set to reduce this barrier. Some private schools in Nepal have reportedly agreed to make Mandarin a compulsory subject in classes in return for China footing the salary for the language teacher.

"China is slowly increasing its political and cultural ties to Nepal. There is already a relationship between the Communist Party of China and the Nepal Communist Party. China is also growing its soft influence in Nepal through China study centers and businesses," Bhattarai told DW.

Nepal's unique position as a geopolitical balancer between India and China will make it an important ally for both countries in the future. Whether Nepal leans toward one country or chooses to remain non-aligned will affect the trajectory of its political and socioeconomic growth and development.