India watches warily as China deepens ties with Nepal | Asia | An in-depth look at news from across the continent | DW | 15.10.2019

Chinese President Xi Jinping's recent state visit to Nepal marked the "beginning of a new era" in bilateral relations, both nations said. As China intensifies its presence in Nepal, concerns in India grow. 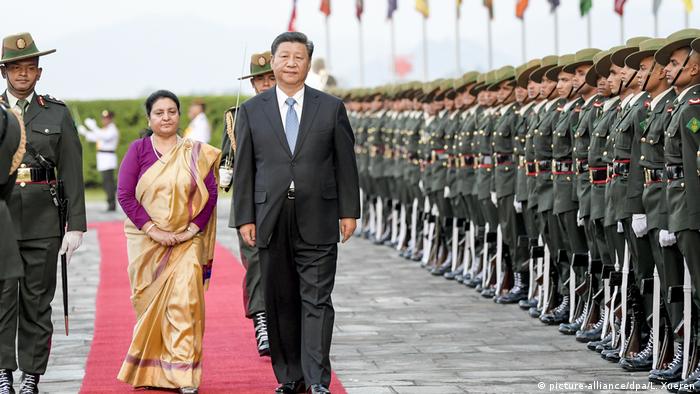 Xi Jinping's state visit to Nepal over the weekend was the first by a Chinese president in more than two decades. During the trip, an official said, Xi announced 3.5 billion RMB ($493 million, €447 million) of aid between 2020 and 2022 "to uplift the living standard of Nepali people."

Xi and Nepali Prime Minister KP Oli also decided to upgrade bilateral relations from a "comprehensive" partnership to a "strategic" partnership. The two leaders inked 20 deals, covering projects in a number of sectors like energy and transportation.

Xi flew to Nepal from India, where he held talks with Indian Prime Minister Narendra Modi and attempted to put the relations between the two Asian giants back on track after they were shaken by New Delhi's move to rescind the special constitutional status of India-administered Kashmir — known as Jammu and Kashmir.

In Mamallapuram in southern India, Modi took Xi on a personal tour of temple monuments dating back to the seventh and eighth centuries when Indian kingdoms cultivated trade ties with Chinese provinces. Modi noted in his opening remarks that he and Xi had agreed at a previous summit to manage their differences prudently and not let them snowball into disputes.

In what could be irksome to India, however, Nepali and Chinese officials agreed to conduct a feasibility study for a cross-border railway project that would give Beijing access to the south through Nepal's open border with India.

"We will develop a multi-dimensional trans-Himalayan connectivity network and help Nepal to realize its dream to transform itself from a landlocked country to land-linked country," Xi said in his address during a banquet on Saturday evening. 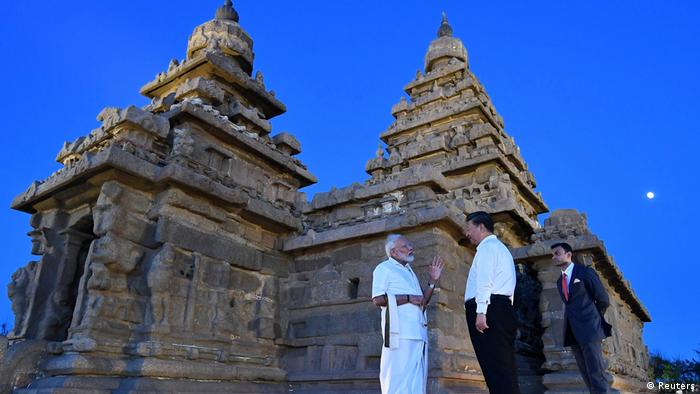 In Mamallapuram, Modi took Xi on a personal tour of temple monuments dating back to the seventh and eighth centuries

Nepal has already signed up to China's Belt and Road initiative, a vast global infrastructure program, which includes the building or upgrading of highways and airports in the country.

New Delhi has vehemently opposed the BRI initiative, saying it ignores Indian concerns over territorial integrity and sovereignty. A part of BRI runs through Pakistan-administered Kashmir, which India claims as its territory.

"China and Nepal take the Belt and Road Initiative as an opportunity to deepen mutually-beneficial cooperation in all fields in a comprehensive manner, jointly pursue common prosperity and dedicate themselves to maintaining peace, stability and development in the region," read the joint statement released by the two countries.

"Nepal is eying several Chinese investments in connectivity and infrastructure. This is indicative of Nepal's aspiration to transform into a regional trade and connectivity hub," Sana Hashmi, author and foreign policy analyst focused on China at the Perth-based Future Directions International, told DW.

China has been wooing Nepal, which rival India considers as within its sphere of influence, with pledges of development in the Himalayan nation sandwiched between the regional giants. Kathmandu has also sought closer ties and much-needed energy and infrastructure investments from Beijing.

K Yhome, a political analyst at the New Delhi-based think tank Observer Research Foundation, says that this thrust on China-Nepal connectivity is a signal to India as well as to the United States. "This is definitely a big push by the Chinese to make some deep, structural changes in India's neighborhood," he told DW.

In recent years, New Delhi has been worried about the China's growing influence over not just Nepal, but also other South Asian nations like Sri Lanka, Bangladesh and the Maldives.

"The Chinese plans now announced in Nepal may further heighten the concern in India," Yhome underlined.

Kathmandu's increasing proximity to Beijing also poses a problem for Washington, say analysts. The US has been trying to rope Nepal into its Indo-Pacific Strategy, whose vision was released in June this year by the US Department of Defense.

The document describes China as a strategic competitor and a "revisionist power." Nepal, eager not to upset Beijing, denied it was part of the US' Indo-Pacific strategy.

Earlier this month, the US cautioned Nepal against participating in the BRI by alluding to the financial troubles it could bring. Japan, too, made similar noises when its Foreign Minister Taro Kono visited Nepal in January.

Another development that New Delhi has been keenly watching unfold is the progress on an extradition treaty that China wants to sign with Nepal. The treaty is largely aimed at cracking down on Tibetan refugees residing in Nepal.

In Nepal, Xi made it clear that his government would not tolerate anti-China activities. "Anyone attempting to split China in any part of the country will end in crushed bodies and shattered bones," Xi said.

Hashmi says Xi's statements were aimed at Nepal and its 20,000-strong Tibetan population.

"Xi wanted to send a signal to the Tibetans residing in Nepal. His statements were in the context of his expectations that Nepal would sign the treaty and would help in curbing Tibetan protests in Nepal," she said.

Xi Jinping has become the first Chinese president to visit Nepal since 1996. Sandwiched between regional titans India and China, the mountainous country is increasingly looking to Beijing for investment. (13.10.2019)