The Modi-Xi meeting is aimed at mending ties strained by India's decision to split Jammu & Kashmir state into two. China, which claims part of the area's Ladakh region, is also a close ally of India's rival, Pakistan. 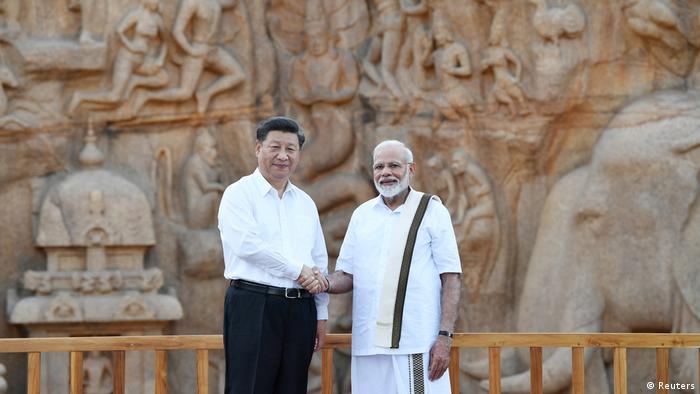 Chinese President Xi Jinping and Indian Prime Minister Narendra Modi pledged to work together against "radicalization" in an informal meeting on Friday in the southern Indian town of Mamallapuram.

"Both leaders said that these were large countries and that radicalization was a matter of concern to both, and that both would work together to see that radicalization and terrorism did not affect the fabric of our multicultural, multiethnic, multireligious societies," Indian Foreign Secretary Vijay Gokhale told reporters.

An official statement from Beijing said Saturday that the two leaders agreed to "promote exchanges and mutual learning among civilizations."

On Saturday, Modi and Xi strolled along a Bay of Bengal beach and held one-on-one talks overlooking the ocean in Mahbalipuram.

"Our Chennai vision today has launched a new era of cooperation between our two countries," Modi said Saturday as he launched the formal talks.

The Indian premier highlighted how the two countries had agreed last year to "prudently manage our differences and not to allow them to become disputes."

India and China agreed to "remain sensitive to each other's concerns" so the relationship "will be a source of peace and stability in the world. All these are our big achievements and inspire us to work harder," he added. 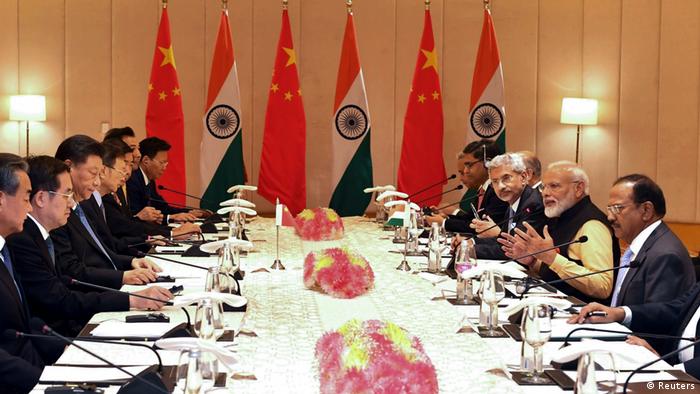 The formal Modi-Xi summit kicked off on Saturday

India-administered Kashmir has been in a state of lockdown since PM Modi abrogated its special status on August 5.

Pakistan and India both rule part of the disputed Himalayan territory of Kashmir but claim it in full. The restive region is a flashpoint between the nuclear-armed archrivals. China, too, has some territorial claims in the area. India has de facto control over about 45% of the region and the majority of its population, while Pakistan controls around 35%. But the remaining 20% is under the control of China.

Beijing is also opposed to New Delhi's Kashmir move, especially its decision to carve the Ladakh region out of Jammu and Kashmir state and administer it federally.

Ahead of Xi's visit to India, Pakistani Prime Minister Imran Khan visited China and held talks with Xi and other government officials in order to win Beijing's support over his country's Kashmir stance.

A Chinese government spokesperson said Wednesday the Indian move was "unacceptable," adding that China would help Pakistan defend "its legitimate rights and interests" in the Kashmir region. India's Foreign Ministry hit back at China, saying it was "not for other countries to comment on the internal affairs of India."

In spite of long-standing territorial disputes, China and India have strong economic ties.

Vikram Misri, India's ambassador to Beijing, said in June that bilateral trade between India and China was set to cross $100 billion (€90 billion) by the end of this year.

Narayani Basu, a New Delhi-based author and foreign policy expert, believes that the China-India relations are unlikely to be derailed in the aftermath of Modi's Kashmir move.

"Both Indian PM Modi and Chinese President Xi Jinping have shown the maturity to compartmentalize their relationship in a way that disputes do not overshadow areas of cooperation. Hence, while there will be diplomatic posturing, nobody should expect more than that," Basu told DW.

The issue of Islamist extremism is also a matter of concern for both China and India. China is wary of an increasing Islamist activity in its Xinjiang region. In the past few years, the Chinese government has acted strictly against the Muslim separatists in the area.

Beijing is equally worried about the expansion of the "Islamic State" (IS) militant group in neighboring Afghanistan and a surge in violence in the war-torn country. It believes that the Taliban and other radical groups in Afghanistan are providing assistance to Xinjiang militants. Security analysts say that many of these militant groups are backed by Pakistan.

"China's Uighurs have proven to be not only an unusual source of friction in China-Pakistan and Afghanistan-Pakistan ties but have also added to regional instability," Siegfried O. Wolf, director of research at the Brussels-based South Asia Democratic Forum (SADF), told DW.

"Beijing is increasingly uncomfortable about the fact that Pakistan's lawless tribal region bordering Afghanistan had developed into a sanctuary for Uighur extremists. Its major concern remains that Uighurs are using the Pakistani territory to create unrest in western China. As such, China expects that Pakistan act more aggressively against these militants," he added.

Read more: Why China's Uighurs are joining jihadists in Afghanistan

New Delhi accuses Islamabad of backing militant Islamist groups in Kashmir. Modi justified his August 5 Kashmir move by saying that it would end "terrorism and separatism" in the area.

Pakistan thanks China for 'support on Kashmir issue'

The dispute over India's move to scrap Kashmir's special status and the China-Pakistan Economic Corridor were the main topics of discussion between two leaders. China's president is expected to travel to New Delhi soon. (09.10.2019)