Pakistani husbands distressed as Uighur wives face Chinese crackdown | Asia| An in-depth look at news from across the continent | DW | 15.02.2019 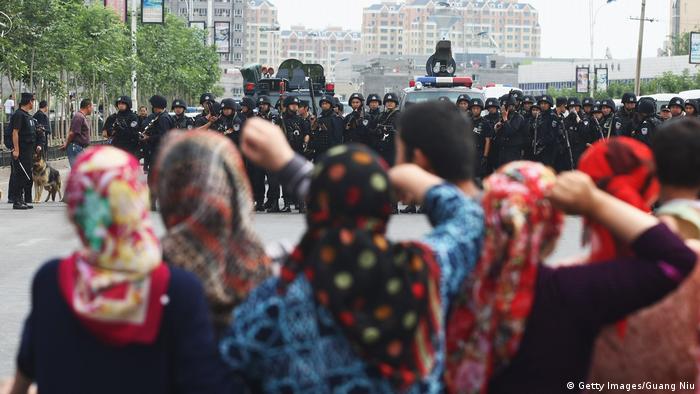 Zaman Khan (name changed) has been running from pillar to post to secure the release of his wife, who has been detained for over two years. He hails from Gilgit-Baltistan, a disputed region and Pakistan's northernmost administrative territory.

A gemstone trader, Zaman married Shermeen Khan (name changed) more than two decades ago in China's restive Xinjiang province, the only Muslim-majority region of the People's Republic where separatists are clamoring for independence from Beijing.

In 2009, Xinjiang witnessed the worst ethnic riots between Han Chinese and Uighur Muslims, whose culture, language, religion and traditions are vastly different from those in the rest of the country.

Many Uighur women have married foreigners, including Muslims from Pakistan.

The father of two daughters and a son, Zaman told DW that he was leading a normal life until everything suddenly changed two years ago. "My wife and I had come to my hometown in Gilgit-Baltistan to meet my extended family; the crackdown had already begun. I was trying to enter Xinjiang but at a check post, they asked me to bring my wife. I came back and told my wife about this, insisting that she should not return to China but she protested, saying she did not commit any crime and that she would go back to her country. When we returned to Xinjiang, she and my son were detained [by security officials]."

Fighting back tears, Khan said he had no idea why his wife and son were detained. "They say it is an educational center but it is a detention center where more than three million Uighurs have been detained without any trial. I have met my wife only thrice in the last two years and my son, I haven't met him even once," he told DW. "My two daughters cry for their mother. What terrorist act could she possibly commit at the age of 60? She has been arrested just for being Muslim. Four other members of her family have also been arrested," he added.

Zaman said the arrest of his wife has devastated him. "I cannot focus on anything. I am tired of consoling my little daughters who keep on asking about my wife. Their education has been badly affected. They look traumatized and have become reticent."

A life of incarceration

A few months ago, Zaman came all the way from China to Pakistan's capital Islamabad, seeking the help of his government. "Pakistani officials have been saying that they are trying. I hate this word now. Why can't Pakistan take up this matter with the Chinese authorities? I worked there for 25 years. I was their guest and this is how they treated me. They not only detained my wife and son, but also sold my house that I had bought with a loan without our permission. My wife's house was recently robbed in our absence. I am deep in debt and my business has been ruined," he said.

Many women who were detained by Chinese authorities have been released, but some men claim their wives are facing restrictions even after being freed from prison. A clothes merchant from Pakistan's Rawalpindi, whose wife was detained almost a year ago, said that despite her release she had to register her phone number with the authorities. "She still has to take lessons, for three hours in the morning and three in the evening. Her phone calls are still being bugged while some of her relatives are still behind bars," he said, referring to "classes" Chinese authorities asked prisoners to attend.

China says it has been cracking down on extremist elements in Xinjiang, but rights groups accuse Beijing of suppressing the culture of the Uighur people, using excessive force against them, setting up internment camps and incarcerating individuals without trial.

Observers say this is perhaps why many Pakistani men have chosen to remain silent on the issue. Mohammad Umer is president of the Umer Uighur Trust and lives in Pakistan's Rawalpindi city.

Many of Umer's kin are also in jail in Xinjiang. "More than 12 members of my extended family have been detained for merely saying their prayers, reciting the Holy Quran and for other religious activity. China is committing the worst kind of human rights violations. Millions of Uighurs are in these jails which they call educational centers," he told DW.

Islamabad is quick to point out excesses against Muslims in any part of the world but Prime Minister Imran Khan's government seems reluctant to criticize the Chinese government's actions, not least because of the fear of potentially jeopardizing its "all-weather friendship" with Beijing.

Political analyst Ayaz Khan says the Pakistani government is silent on this issue because it does not want to offend China, which has pledged to invest over $60 billion (€53.2 billion) in various projects as part of the China-Pakistan Economic Corridor (CPEC) initiative. "China has pumped billions of dollars into Pakistan and we might need more money. So how can we offend Beijing?  PM Imran Khan's silence may have disappointed people, but he has also learnt that it is easy to say things when you are not in power, but difficult to do things while in power because you have so many limitations," the analyst told DW.

But Zarfar Ali Shah, a prominent leader in the ruling Pakistan Tehreek-e-Insaf (PTI) party, told DW: "If China is really doing this, then it is condemnable. I will take up this matter with my government, urging them to contact the Chinese authorities over this matter. This is a serious issue, which cannot be ignored."

The issue has also gone unnoticed in Pakistan's mainstream media and most Pakistanis do not know about the plight of their fellow citizens.

Zaman from Gilgit-Baltistan, meanwhile, seems to have lost all hope. He is not ready to buy into promises made by Pakistani officials any longer. Instead, he now pins his hopes on the international community to pressurize Beijing into ending its harsh policies in Xinjiang and releasing the numerous Uighurs held in detention there, including his wife, son and other relatives.

China releases video of Uighur musician to 'disprove his death'

Abdurehim Heyit is in "good health" according to an unverified video released by Chinese state media following reports of his death in a detention camp. Turkey demanded China close its "Muslim concentration camps." (11.02.2019)

Western countries, including Germany, have demanded China shut down detention camps where up to a million ethnic Muslims are reportedly being held. Beijing has rejected the demands as being "politically driven." (07.11.2018)

Chinese authorities have reportedly detained a number of Uighur women who are married to Pakistani men in the South Asian country's northern Gilgit-Baltistan region. The move has angered the locals, Sattar Khan reports. (12.03.2018)