What does China want to achieve by 'modifying' Islam?

The Chinese government's plan to make Islam compatible with Chinese culture and society has attracted widespread criticism. But can Beijing achieve this goal in today's globalized world? William Yang reports. 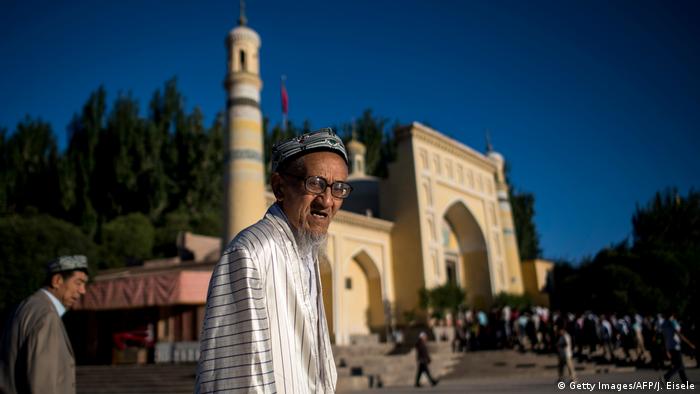 On Sunday, Chinese authorities announced their plan to Sinicize Islam through a five-year plan. According to a report published in the state-run Global Times newspaper, on January 4, representatives of Islamic associations from eight Chinese provinces participated in a Beijing seminar and discussed the outline for how to align Islam with Chinese norms. A government official said it was important for China's Muslim community to "improve their political stance and follow the [Communist] Party's lead."

David Stroup, a China expert at the University of Oklahoma, told DW that the Chinese government wants to tighten control over Islamic groups and take measures to remove overly foreign features from public places.

"This could mean continued efforts to remove public signs in Arabic or make changes to Arab-style mosques," Stroup said. "At the same time, the government may try to assert more direct control over the practice of faith, especially over the clerics' weekly sermons," he added.

Haiyun Ma, a history professor at the US-based Frostburg State University, says that the Chinese government's Sinicization drive borders on xenophobic. Ma believes that by emphasizing the need to remove foreign influences, the Communist Party wants to create a Chinese version of Islam that is guided by atheism.

"Beijing considers the Arab influence as dangerous and believes it should be totally eliminated from the lives of Chinese Muslims," Ma underlined.

"Also, it wants to cut off Chinese Muslims from other Muslim countries. In other words, China is trying to isolate its Muslim community while claiming it is embracing globalization," Ma added.

Many analysts see the increased efforts to Sinicize Islam as part of a large-scale crackdown on Muslims, especially in the Xinjiang region. The authorities have reportedly put at least one million Xinjiang Muslims in internment camps. These measures have raised concerns among Muslims in other parts of China that Beijing wants to implement the Sinicization model across the country.

In November last year, Global Times reported that officials in regions with sizable Muslim populations are "learning" from the Xinjiang experience, which, according to the government, is aimed at curbing terrorism.

Analyst Stroup says the international community needs to increase pressure on Beijing to force it to alter its treatment of the Muslim community.

"So far, the international community has not taken up the issue in a serious manner," said Stroup.

Ma is of the view that it won't be easy for Beijing to Sinicize Islam as its multibillion-dollar Belt and Road Initiative (BRI) is inviting influences from a number of Muslim-majority countries like Indonesia, Kazakhstan, Pakistan and Turkey.

But the expert believes the US could use its influence to pressure China.

"It is possible that the US and other Western countries can work with the Muslim nations to tackle this issue," suggested Ma. "In other words, the US can win the hearts and minds of key Islamic countries."

A precursor to a major conflict?

Ma believes that local authorities are likely to play a major role in the Sinicization drive, but warns that it comes with some risks.

Violent conflicts between local authorities and Muslim communities have erupted in Ningxia and Yunnan in the past few years. Cui Haoxin, a Hui Muslim poet, told DW that the Sinicization measures will not be easily accepted by the Muslim communities.

Cui says that such acts could have a snowball effect and are likely to transform into a major conflict in the future.

"It is hard to rationalize these measures," Cui said, adding that the situation for Muslims in China is getting worse.

In China's Muslim-majority Xinjiang region, there have been reports of "re-education" camps where over 200,000 "suspects" are being held. DW spoke with researcher Adrian Lenz about the veracity of the reports. (21.06.2018)

While the Muslim Uighurs are increasingly being persecuted, the largest Chinese-Muslim minority, the Hui, are under less scrutiny and thriving as a religious community. DW examines the reasons behind this phenomenon. (09.12.2016)